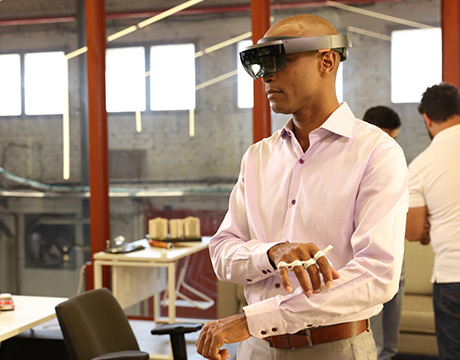 What could be more ubiquitous than the standard QWERTY keyboard? It easily moved from early 20th Century typewriters to 21st Century computers and mobile devices, acting as the standard point of data entry. But now its run may be threatened by the TAP wearable device that allows a user to tap letters, numbers and words into a device without a keyboard.

The TAP device consists of five connected loops that slip over the knuckles on the fingers and thumbs. Using a Bluetooth connection, the user taps on any surface or uses finger gestures to generate letters and symbols. It can also be programmed for use on gaming devices.

“There’s so many more advantages than with a QWERTY keyboard,” said Dovid Schick, co­founder of TAP Systems, who invented and led the development of the device. “The fingers are much more natural and ergonomic.”

Schick, an electrical engineer who pioneered the use of digital technology in dentistry and medicine, said the idea behind TAP started percolating when Google Glass and similar virtual and augmented reality technology were introduced. “How is input going to be performed?” he remembered asking. “Smart watches were just starting, and virtual reality devices were available for entertainment. But it was the same issue: There was no place in these devices to build in a new keyboard.”

TAP comes with apps to teach the user how to use it. TapGenius breaks down the alphabet into a system that Schick said is easy to remember and gets a user tapping within an hour. It uses music and visual cues to help memorize the alphabet, numbers and symbols. TapManager provides short tutorials and software updates.

TapAcademy provides a 30­day program to practice and perfect the motions needed to tap efficiently. “This is not cognitive, it is all about muscle memory,” training the muscles to operate the device, said Schick. “That’s what TapAcademy does, provides 10-minute per day drills for 30 days.”

Editor’s Choice: How Engineers Can Resolve Conflict and Save Their Business

Schick says the design was “fairly straightforward” and a prototype was produced over just a matter of months. But things became challenging after testing each iteration of the device.

“The main thing we faced was to make a wearable comfortable, for each size hand,” he said. “And how do you get accurate data from all of the sensors without interfering with tapping?”

Schick was “dead set” against using a glove, partly because of durability and also because he doubted users would want to wear one. He gravitated toward a linear strap, experimenting with different fabrics and foam. “Every time we changed something in the mechanical design, we had to re-collect data from the test subjects and figure out how things changed,” he said.

In the end, Schick threw out textiles and opted for the current design of TPU rings connected with a braided nylon strap.

To develop the tapping nomenclature, the designers tested 31 different tap possibilities within a large group of test subjects. Schick says tapping the alphabet is straightforward—an ‘a’ is a single tap of the pointer finger— but punctuation involved a lot of trial and error.

The device is programmable. Users can assign double taps or shift commands for customized use, and it can be programmed for a variety of languages. An unintentional, added benefit is the technology’s adaptability for the visually impaired. Because tapping, like typing, is tactile, visually impaired users can create text as quickly as others.

The open-source device also supports Apple’s VoiceOver, a gesture-based utility that enables use of iOS without seeing the screen. TapMapper allows users to create personal layouts that can be shared with other users for gaming, makers, coders, and enterprise users. The TAP device retails for $179.

For Further Discussion
The main thing we faced was to make a wearable comfortable, for each size hand. And how do you get accurate data from all of the sensors without interfering with tapping?Dovid Schick, TAP Systems