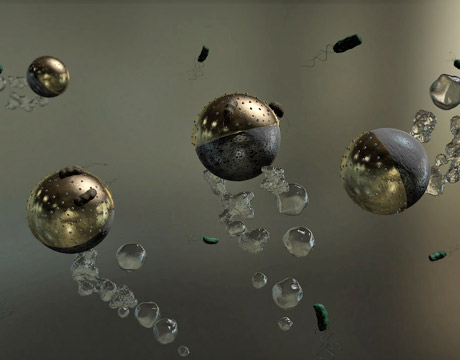 One of the most serious health risks for people around the world is inadequate access to clean water.

Waterborne diseases have devastating impacts on public health—for example, E.Coli bacteria cause an estimated 265,000 infections each year in the U.S.

Current disinfection methods depend largely on chemicals and disinfectants. However, some pathogens cannot be killed using conventional disinfectants and require a combination of methods, or higher disinfectant doses, which can leave harmful byproducts in the water.

As a result, a pressing need exists for more effective water-cleaning technologies that are also safe for the environment and human health.

Intrigued by the use of catalytic, self-propelled micromotors as an environmental tool for capturing heavy metals and other pollutants, Diana Vilela and Samuel Sánchez, scientists at Max-Planck Institute for Intelligent Systems in Stuttgart, Germany, and the Institute for Bioengineering of Catalonia in Barcelona, Spain, explored a similar concept for removing waterborne bacteria. With the help of several other collaborators, they developed a self-propelled microrobot that is highly effective in removing E. coli bacteria from contaminated water. They presented their results in June 2017 paper published by the American Chemical Society.

How the Robots Work

Sánchez and Vilela developed microbots that rely on a chemical reaction to propel them through the water; they are coated with an exterior layer of silver nanoparticles to kill the bacteria they encounter.

“The structure of the microbot relies on a magnesium microparticle as a template, which also functions as propulsion source by producing hydrogen bubbles when in contact with water,” they write. “An inner iron magnetic layer enables their remote guidance and collection. The outer silver-nanoparticle-coated gold layer facilitates bacterial adhesion and improves bactericidal properties.”

The robot is sometimes called “two-faced" or “Janus” because one side is made with magnesium, which reacts with water to produce the hydrogen bubbles. The other side is composed of alternating iron and gold layers topped by silver nanoparticles. Bacteria adhere to the gold and are killed by the silver nanoparticles.

“Fabricating mechanical microrobots is challenging,” says Sánchez. “Keeping a simple design is sufficient for motion—for example, providing an asymmetry in the chassis. Asymmetry is created by elegantly depositing thin layers [tens of nanometers] of iron and gold on one side. This is the same side that is coated with silver nanoparticles.”

Once deployed, the microbots are autonomous—they move through the water, trapping and killing bacteria. Lab tests showed that the microbots killed about 80 percent of E. coli in a contaminated water solution within 15 minutes. After the job is finished, the robots are removed from the water with a magnet, along with the captured dead bacteria.

Sánchez and Vilela have shown their magnesium-based Janus microbot is effective at removing bacteria. It is also biocompatible, environmentally friendly, and does not produce chemical waste during and after operation.

“We have proven the successful combination of active systems and nanomaterials to develop new micromotors for the cleaning of waterborne bacteria from contaminated water,” they write. “Future work will be carried out using pathogenic bacteria in contaminated drinking water. This study opens real possibilities for developing novel micro- and nano-machines for demanded energy and environmental applications.”