Electrical Equipment and Appliance Manufacturing Fabricated Metal Product Manufacturing Robotics
A project underway in the Yin Group of Applied Mechanics of Materials Lab at North Carolina State University (NCSU) sounds like it could result in the Superman of soft robots.

Inspired by nature, especially the biomechanics of a cheetah’s spine, researchers have developed a new type of soft robot that can move quickly on solid surfaces or like a fish under water, ascend with gecko-inspired climbing ability, jump off a table, grab delicate objects such as an uncooked egg, and lift heavy objects as well.

“Most soft robots are designed for a single purpose,” said Jie Yin, team leader and an assistant professor of mechanical and aerospace engineering at North Carolina State University and corresponding author of a paper in published in the journal “Science Advances” reporting on the team’s work. “We have demonstrated that this is a multi-task soft robot that can be used multi-purpose.” 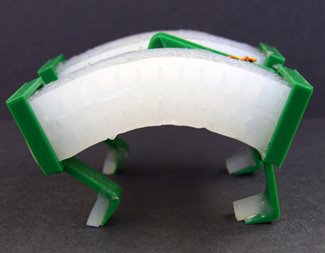 Adding a “spine” to the actuator improves the robot’s performance. Credit: Yin Group, North Carolina State University.
Yin’s work with soft robots grew out of his expertise and interest in fundamental mechanics and the functionality of novel materials and structures. “Soft robots have become a hot area,” he said. “I see a lot of potential for pioneering work. “The good thing about soft robots in general is the safety factor around humans and their ability to adapt to their surrounding environment.”

Although other roboticists have been inspired by cheetahs for their speed, notably those developed by Boston Dynamics and Massachusetts Institute of Technology, those robots are rigid. Previous soft robots, unlike rigid robots, have been considerably slower because they use a crawling motion to move, staying in contact with a surface at all times.

“There are two challenges with a soft robot,” Yin said. “One is speed (meaning response time), and the other is the force.”

To overcome these challenges, Yin’s team delved into the mechanical action of the cheetah’s spine, which because of its extraordinary flexibility allows the animal to arch its back significantly as it runs, producing a lot of power. So the team set out to create a new type of soft robot with a spring-powered spine that releases enough energy to propel the robot forward much faster than before.

The key, said Yin, is creating a bistable system that acts like a switch. There are two stable states and no intermediate state, such as a light switch that can be in the off or on position (and not dimmable) or in nature a venus fly trap, which can be open or closed. In both examples, neither can be positioned anywhere in between in contrast to a drawer that can be open, closed or somewhere in between.

“We can switch between these two stable states rapidly by pumping air into channels that line the soft, silicone robot,” Yin said in an NCSU release. “Switching between the two states releases a significant amount of energy, allowing the robot to quickly exert force against the ground. This enables the robot to gallop across a surface, meaning that its feet leave the ground.”

Although inspired by the cheetah’s flexible spine, the robot that is forming a new class called “Leveraging Elastic instabilities for Amplified Performance” (LEAP) doesn’t look at all like a cheetah. It has no head or tail and the legs are passive, attached only to get friction.

Only 7 centimeters long and weighing about 45 grams, the robot consists of three components: two soft pneumatic two-way bending actuators as skeletal muscle, a 3D-printed flexible mechanism composed of two rigid hinged links as a spine, and a pretensioned spring that connects two ends of the mechanism for potential mechanical energy storage and release.

“The magic is adding ‘a spine’ to the actuator,” Yin said. “That drives the fast speed.”

The prototype was used to show that LEAP robots can reach speeds of up to 2.7 body lengths per second, more than three times faster than the 0.8 body length per second of previous soft robots. They are also capable of running up steep inclines, difficult if not impossible for previous ones. The actions are demonstrated in this video.

For underwater use, a fin is attached instead of feet to improve swimming speeds.

More for You: Video: How Industrial Countries Invest in Robotics

“We also demonstrated the robot can grasp a fragile egg without cracking it and that it can grasp and drag a 10-kilogram dumbbell. That means the grippers are tunable and adjustable for grasping strength,” Yin said.

Larger scale LEAP robots could be used in search and rescue and in industrial manufacturing applications where production is fast but the robot must be capable of handling both fragile and heavy objects.

The smaller ones–miniature or micron-could be used inside the human body for health monitoring, such as having a camera to explore inside arteries; for carrying and delivering drugs; and for use as surgical robots.

The researchers said this work serves as a proof of concept, and next steps include scaling up and down to human-size scale as well as to micron scale. They believe that by modifying the design, they can make LEAP robots even faster and more powerful.

“We are at three body lengths a second (with the prototype). A cheetah can move 16 body lengths per second, more than five times faster. I don’t think we can beat the cheetah when scaling up, but if we scale down to the micron scale, I think it will be more powerful,” Yin said. “That’s the one we are trying to do. We have very ambitious plans for the next year or two.”