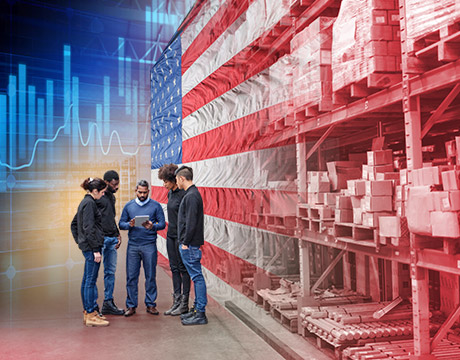 The State of American Manufacturing 2019

U.S. manufacturers had a great 2018, but concerns continue to accompany every positive trend.

This starts with output. The value added by manufacturers rose 7 percent in 2018, to nearly $2.4 billion. This represents 11 percent of the American economy. Yet viewed as a percentage of GDP, manufacturing continued to decline, just as it has for the past 70 years.

The 2018 tariffs benefitted some producers, but trade suffered. While the United States exports only a small fraction of what it manufactures, those shipments dropped precipitously late last year as China and other nations retaliated against U.S. tariffs. Equally concerning, companies that sourced Chinese parts for their factories had to scramble for replacements to keep their lines running.

Employment, a key measure of manufacturing muscle, rose for the fifth consecutive year, adding 1.4 million workers since the bottom of the recession. Today, producers employ nearly 13 million workers, 8.5 percent of the non-farm workforce.

This actually understates the number of jobs, since it does not include more than 760,000 contract factory laborers who work for temporary employment firms. Nor does it include outsourced services once done by factory workers, ranging from warehouse management and equipment maintenance to design and engineering.

Recommended for You: Manufacturing Takes Flight

Manufacturers also worry about replacing 2.9 million baby boomers who will reach retirement age over the next decade—and about finding workers with digital skills to operate increasingly sophisticated machines.

How manufacturers resolve those issues will make a difference. So let’s examine them in greater depth.

At $2.4 billion, U.S. manufacturing output is higher than ever, second after China, and 2.5 times larger than Japan and Germany combined. While it accounts for 11 percent of U.S. GDP—lower than other major competitors—it eclipses the economic output of entire nations, such as Italy, Brazil, South Korea, or Russia.

The strength of the U.S. manufacturing sector is no surprise. U.S. producers benefit from a large and wealthy domestic market and a vigorous economy.

America also ranks high as a place where producers thrive. It ranks third on Brookings Institution’s Global Manufacturing Scorecard and second for innovation on the World Economic Forum’s Global Competitiveness Report 2017-18. It is home to 10 of the world’s top 20 innovative cities, according to 2thinknow’s well-regarded Innovation Cities Index.

Listen to the latest episode of ASMETechCast

Industrial R&D is also a potential concern, according to the Congressional Research Service. R&D has grown at lower rates than many competitors. It was also concentrated in such high-tech sectors such as pharmaceuticals, electronics, and aerospace. In other countries, more research dollars go into such medium-technology sectors as automotive and machinery manufacturing.

The United States, like other developed nations, also faces low productivity growth. It averaged roughly 4 percent between 1990 and 2007, but has risen only 0.7 percent annually since.

No one is certain why. Some argue that new technologies are not as powerful as past advances, or that it takes longer to realize their gains. Others claim data fails to capture the increasingly important service element in manufactured goods.

Despite these clouds, more than 92 percent of manufacturers reported that they were optimistic about their company’s outlook in 2018. It was the highest total in the National Association of Manufacturers’ survey’s 20-year history.

Western Michigan-based RoMan Manufacturing, which makes welding transformers, buys almost exclusively from U.S. vendors and sells 85 percent of its products in North America. Yet its struggles show how deeply the Trump Administration’s trade wars have impacted many manufacturers.

When President Trump imposed tariffs on steel and aluminum in March 2018, RoMan co-owner and CEO Robert Roth knew that domestic suppliers would raise prices. Roth would like to pass those costs onto his customers, but then he risks losing bids to offshore vendors using cheaper aluminum. So he may have to absorb the cost himself.

“The Israelis buy untariffed electrical steel, which costs less,” Roth explained. “When they export cores to us, it’s not tariffed because it’s considered a fabricated product. The tariffs let fabricated steel products into the United States at a lower price, because there’s no tariff on the base material.”

Others have similar problems. Steel tariffs boosted the cost of Capital Cooking’s high-end ranges by $800 to $1,000, making them less competitive against imports. Steel beer keg maker American Keg had to lay off workers. Union Pacific paid $6 million in duties for a boatload of a grade of Japanese steel rail not made in the United States.

The Trump Administration placed tariffs on steel and aluminum tariffs to jumpstart U.S. metal production and on Chinese products to force China to negotiate on issues like forced technology transfer and export subsidies.

These steps partially succeeded. Domestic steel shipments rose 5 percent in 2018 and several steelmakers announced plans for new capacity. America and China are negotiating, though the outlines of any final deal are unknown.

Meanwhile, thousands of companies like RoMan, Capital, and Union Pacific are left to figure it out.

Roth, however, has a different plan. His firm spent the past two years reengineering his transformers to take out 40 percent of their cost.

“Even though we saw steel prices rise, we still lowered our selling price dramatically,” he said. “We’re trying to direct automakers to the new product and show them the opportunity.”

By now, almost everyone knows that while the United States lost 4.3 million manufacturing jobs between 2001 and 2019, production reached historic levels. Yet economists are still debating why this happened.

Some researchers assert that computers, robots, and automation have made factories more efficient. Automakers, for example, replaced human welders with robots and battalions inventory clerks with computers. The same scenario has been repeated in smaller factories, too. Since the 1940’s, factory workers as a percent of the labor force has been declining at a steady rate.

Others are skeptical. The industry began automating 70 years ago, yet the number of manufacturing workers remained stable until 2001, when China received preferential tariffs after joining the World Trade Organization. Aided by government subsidies and low-cost labor, some Chinese imports sold for less than raw material costs in the United States.

Rural areas, once populated by many small factories, were devastated. Millions of jobs disappeared, with few options for similar work nearby.

But while economists argue over why jobs have declined, there is one fact they all agree upon: who gets hired has changed.

Between 2000 and 2016, when overall manufacturing was falling 20 percent, employment was rising for workers with at least an associate degree.

This may be due to the growing digitalization of manufacturing. Brookings Institution economist Mark Muro tracked the digital content of 545 professions and rated them on a scale of 100. Software developers, as one might imagine, scored 94 in 2016. Among manufacturing professions, engineers ranked around 70.

When manufacturers talk about a skills gap, this is at least part of what they mean. Not only must they replace 2.9 million retiring baby boomers over the next decade, but they also must hire new types of workers with digital skills to replace the old. Deloitte warns that gaps in skills, especially digital skills, may leave as many as 2.4 million jobs unfilled over the next decade.

It looks tough for manufacturers, but it could mean more opportunity for workers with the right training.

For manufacturers, the future is now.

“Those machines will all connect to a single data hub, but they will be monitored by controllers from different companies,” said Wilfried Schäfer, executive director of the German Machine Tool Builders Association, which runs EMO.

This is a big step forward. Smart factory deliverables—combinations of Internet of Things sensors, cloud computing, Big Data analysis, and artificial intelligence—are only a few years old. Until now, they were the proprietary province of such automation leaders as GE, Siemens, Bosch, and their deep-pocketed customers.

The development of plug-and-play standards gives smaller producers a way to get smarter without breaking the bank.

Smart systems can provide new insights into machinery and workflows, and even use AI to schedule jobs, assign machines, and route parts autonomously. Either way, they yield real-world savings.

Rockwell Automation, for example, ran a Big Data analysis of sensor data from a large coffee roaster and found it could slash the 100 excess machines it needed to keep production steady during maintenance turnarounds, said the company's director of advanced technology David Vasko.

In Michigan, Kuka Systems linked more than 60,000 devices (including 259 robots) and business software. Its single assembly line runs 24/7 and churns out one of eight different unpainted Jeep Wrangler body types every 77 seconds.

Other technologies are also transitioning to the shop floor. Industrial robot use is rising rapidly—but industry also bought more than 60,000 autonomous mobile robots to deliver products and parts in warehouses and on the factory floor last year.

One day, speculates Srivats Ramaswami, CTO of 42Q, a vendor of cloud-based manufacturing software, smart automation may enable wealthier nations to build factories near their engineers and markets without worrying about competition from low-wage offshore producers.

Recommended for You: Manufacturing Special Report