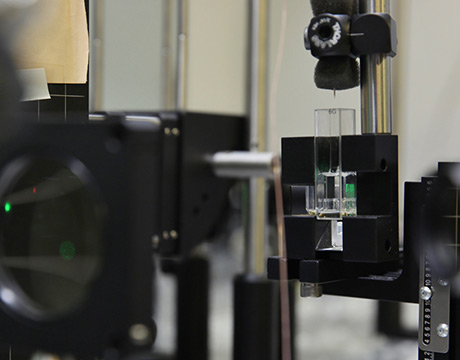 Speeding Up 3D Printing by a Lot

Anyone who’s watched a 3D printer in action knows the whole experience is one of excruciating boredom. It can take hours for a standard a standard printer to create a simple figurine. Yawn.

Maxim Shusteff, a staff engineer in the materials engineering division of the Lawrence Livermore National Laboratory, and his colleagues, were just as bored with the process as the rest of us. So they found a way to speed things up…by a lot.

“The question we put to ourselves was could we take the next leap in additive by making 3D structures all at once,” Shusteff says.

To do that they turned to that ever-useful phenomenon, light. Stereolithographic printers already use light to cure polymers. But they do it at a snail’s pace, layer by layer. Shusteff’s team hoped to eliminate that annoying limitation. Borrowing from the techniques of holography, they created a 3D-printing process that uses lasers to cure every part of an object at the same time.

The Livermore researchers call the method “volumetric printing” and have used it to print beams, planes, struts, lattices and other complex and curved objects in seconds. Their paper was recently published in Science Advances.

In essence, Shusteff’s volumetric printer sends multiple laser beams into a vat of photosensitive liquid polymer. The polymer hardens where the lasers intersect and the light is at its brightest. “It takes a certain dose of light to cure the material,” Shusteff says. “We are trying to shape the light pattern so that it all reaches a certain dose at the same time.”

The printer uses a primary laser beam that has been expanded to about two inches in diameter. Other beams are reflected to intersect with the wider beam to create the right intensity. Watch the process here.

For lasers to reach all points of an object at once, the polymer they transverse needs to be transparent. Right now that means the object that’s 3D printed has to be transparent to the visible eye. As a result, the items the lab has printed so far have a clear, icy quality to them. But future versions of the printer could, conceivably, print in color, mainly because visible light is only one type of radiation and many materials are transparent in some wavelengths but not others. “Transparency is not as narrow of a category as, intuitively, we think it is,” Shusteff says.

Once the printer is automated, it will be able to cure an entire action figure, phone case or whatever in about ten seconds or so.

In addition to revolutionizing the speed of printing 3D objects, the new process will also fix some other problems. Spanning and overhanging structures, which are difficult to create with traditional 3D printers, would be no problem for a volumetric printer. And the size of a printed object is theoretically unlimited. “To make bigger parts, all you need is a bigger tank of resin and a more powerful light source —both are widely available,” Shusteff says.

With a seconds long print time, volumetric printing may eventually take 3D printing fully out of the prototype realm and straight to manufacturing. But that revolution will have to wait till there’s been a little more development.

“What we did is take a first stab at seeing what’s possible with this technique,” says Shusteff. “We haven’t had a chance to push the performance matrix to any great degree. Can we do a part in a second? Can you do it in a tenth of a second? Who knows? There’s plenty of work to do.”

Read more about new advances in manufacturing and design on ASME.org

To just make bigger parts, all you need is a bigger tank of resin and a more powerful light source. Both are widely available.Maxim Shusteff, Lawrence Livermore