Solar, Hotter Than Ever

Solar, Hotter Than Ever 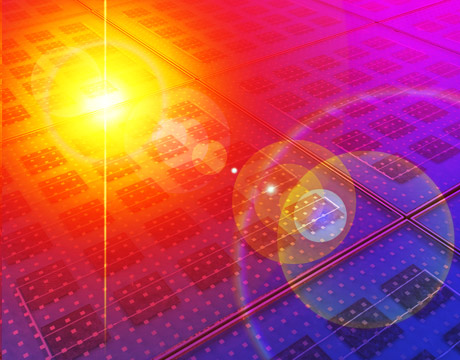 However cheap and effective today’s solar cells may be, they don’t yet take advantage of all the light that hits them. Solar thermal energy converters are an alternative to photovoltaic cells that have the potential to reach much higher efficiencies at much lower costs. Now researchers at the University of Bristol, UK, have found a new way to efficiently milk each sunray of its energy, bringing us one step closer to that potential.

The trick is to not let the sun’s heat get away. When a surface gets hot, it starts losing heat immediately, through conduction, convection, and radiation. Put a material in a vacuum, though, and you’ve stymied conduction and convection of their heat-sapping powers. “If you could find a way of preventing the radiation from getting out,” says Martin Cryan, a professor of applied electromagnetics and photonics at Bristol, “then you’ve got this object that, when you put all this solar energy in, it can't conduct it away, can't convect it way, and can’t radiate it away, so it will get much, much hotter.”

To do that, Cryan and Ph.D. student Chenglong Wan created a three-layer sandwich with carbon in the center and gold on the outside. The combination acts the way a silver blanket does, minimizing heat otherwise lost through radiation. The surface is also a metamaterial. That is, it’s patterned using nanolithography, by Wan, to further reduce radiation loss in ways that seem somewhat unnatural. “What we've created is a surface that looks black to the sun, but to all these other wavelengths it looks like a mirror,” says Cryan. Thus, the majority of the energy that hits the sandwich is trapped inside.

The technology could someday sit on the roofs of homes or other buildings. But to really start cooking it would require much higher temperatures than those typically found there, somewhere in the neighborhood of 500-600 degrees Farenheit. To get that hot, though, the gold-carbon-gold sandwich would have to sit at the focus of a big parabolic dish, sucking up the rays from a much larger area.

The triple decker is part of a larger project at the university, run by Dr. Neil Fox, to develop the field of Solar Thermionics. In essence, it attempts to capture the electrons given off when things get hot, and put them to use. The central carbon layer may help in the efficient emission of the electrons. The technology needs to be in a vacuum, so it would likely end up looking like a light bulb. “The whole area may rescue an industry that’s about to shut down, because no one wants incandescent light bulbs anymore,” says Cryan. “Putting things in a vacuum and getting electricity in and out of the vacuum is a very well-established technology.”

Currently, Cryan and his team are trying out materials that can withstand greater heat. Gold gets soft at around 500 degrees and melts around 1,000 degrees. Cryan is hoping that nickel or nichrome can hit 1,000 degrees without much of a change. Later this year they’ll bring their technology to India and test it on a huge parabolic mirror there that will take the temperature to such heights.

While such a system—a parabolic mirror focused on a light bulb-like object—could some day sit on rooftops in sunny parts of the world, it’s not likely to replace photovoltaic cells anytime soon. “But if you're in the middle of a desert in an isolated community, photovoltaics might not be the best option,” says Cryan, as, ironically, when photovoltaic cells get really hot they don’t work as well. “But it’s a few years away yet.”

Learn about the latest energy solutions at the ASME Power & Energy Conference.

For Further Discussion
What we've created is a surface that looks black to the sun, but to all these other wavelengths it looks like a mirror.Chenglong Wan, University of Bristol