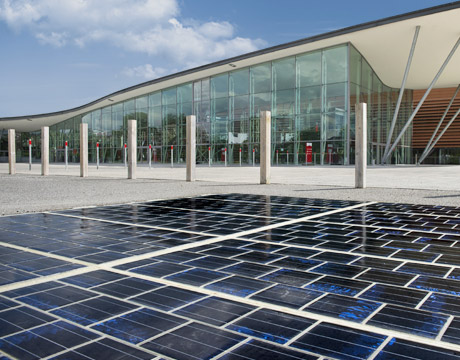 The dream of using our sun-soaked ribbons of highway to fulfill all our power needs has been batted around for a while. Scott Brusaw’s Solar Roadways, for instance, has been in the works for more than five years (and they just installed a small swath at a rest stop on Route 66 this June) as reported here. Their viral “Solar Freakin’ Roadways” video, which has been viewed more than 21 million times, effectively spread the word, but also inspired a skeptical backlash. Some say sun-drenched space is not so scarce that we need to shoulder the cost of repaving our roads with photovoltaic hexagons. Also, that essential ingredient to a solar panel—glass—is not likely to stand up to the repeated application of 40-ton semis, claim others.

Now, a French company, Colas, has come up with a new product for creating solar roads that they hope nullifies some of the resistance. Wattway, as it’s called, is made to be road-strong and easy to apply. It’s been in development for about as long as Solar Roadways.

“The whole point of Wattway is to protect the solar cell,” says Nicolas Griglio, the company’s development engineer for U.S. and Canada. The business element of a solar cell, unprotected, can easily snap between two fingers. So each cell is “encapsulated in a multilayer of chemical components” that are proprietary. Whatever their makeup, they’ve withstood more tonnage in the laboratory than would be allowed on the road, say company officials.

In addition to making Wattway durable, they’ve made it easy-to-put-on-able. There’s no need to rip up asphalt and repave. Instead, Wattway is slapped onto existing road with glue—also proprietary.

The top of the eight layers that make a Wattway strip is roughed-up to be as anti-skid as asphalt. Thanks to this layer, efficiency had to take a hit, but just by two percent. It’s more than made up for by a surprising result: Because the anti-skid surface absorbslight from all directions, the setup is more efficient on cloudy days than in direct sun light.

With the glue, the anti-skid surface and the layers for durability, Wattway is still only nine millimeters thick. So the product may very well have applications beyond the street. “We’ve had a lot of demands for installing Wattway on the roof,” says Griglio. But making it work on the road is the company’s first priority.

Griglio says he simply ignores what he calls the “hater reactions.” Taking advantage of pre-cut land is no small matter, he points out. “In the U.S. there was an amusement park that wanted to have a percentage of its power come from solar,” he says. “They tore down a whole forest to install a solar farm. I thought that kind of story was crazy.”

To offer an alternative to such behavior, Colas is currently negotiating to install 100 square meters in the U.S. One possible impediment, though, is our snowplows. “You guys have a lot of snow compared to winter here in France,” says Griglio,” Here we don’t have very big snow plows, whereas yours are huge, like a tank. The blade can be quite damaging for Wattway.” They may develop a second product that’s even stronger, or, perhaps, they could convince a road crew to carve a few millimeters out of roads, so the solar panels would rest on a lower surface than where the plow’s blade does its work.

Ignoring the plow issue, a mere 20 square meters of Wattway is enough to power a single home (not including heat). So it may not be too long before we’re gluing Wattway to our roads by the mile. “We want to implement it in every climate,” says Griglio. “Not only in the U.S., France, and Europe, but across the world.”

For Further Discussion
They tore down a whole forest to install a solar farm. I thought that kind of story was crazy. Nicolas Griglio, Wattway