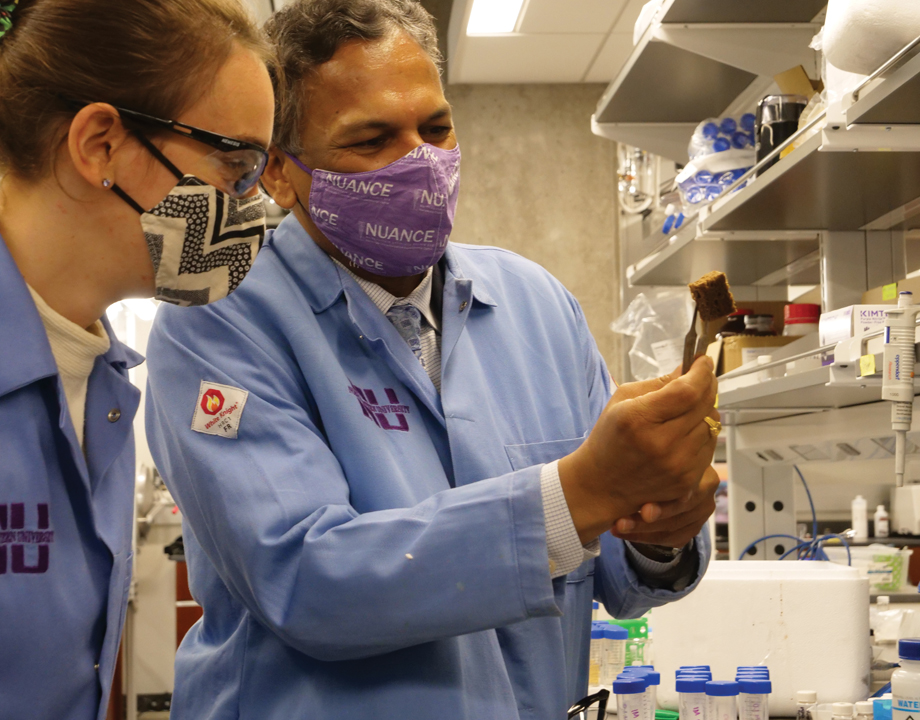 Materials Technology and Society
Phosphate runoff into U.S. waterways is constant, nagging problem. Often tied to fertilizer applications, the substance depletes water of oxygen and feeds algae blooms that foul rivers, streams and lakes. The gigantic dead zone in Gulf of Mexico may be the biggest example, the result of runoff carried by the Mississippi River.

Researchers at Northwestern University may have unlocked a protection mechanism with development of a nano-coated sponge-like membrane that selectively sequesters up to 99 percent of phosphate ions from polluted water. It is coated with iron-oxide nanostructures that bind to phosphate. By adjusting the pH, researchers have shown not only that they can capture phosphate, they can also release it.

The Phosphate Elimination and Recovery Lightweight (PEARL) is porous, flexible and made of cellulose, said Vinayak Dravid, the Abraham Harris Professor of Material Science and Engineering, and director of the Soft and Hybrid Nanotechnology Experimental Resource. “We wanted to develop science and technology that is business centric or has the potential to be scalable,” he said.

The researchers built on earlier work in developing the oleophilic hydrophobic multifunctional sponge that has the same platform but was designed to remove and recover oil from water. The effects of phosphate pollution are well known in the Great Lakes region, prompting the researchers to modify the sponge to collect and release phosphates.

“People often work with precious metals like gold or silver for different remediation and catalytic applications,” said Stephanie Ribet, a Ph.D student and lead author of the paper describing the work. “We were looking for something more cost-effective and earth abundant, so the iron oxide serves that role.”

“It has a very high affinity for phosphorous in the form of phosphate, sow we have a tiny five percent to 10 percent of the coating inside the pores of the cellulose,” said Dravid. “So when you let the water flow through this membrane, with a very low pH, it has the ability to attract phosphate so you create the phosphate coating on this nanoparticle. There’s a very high surface area, a small amount can sequester a very large amount of phosphorous. Then we can take it to a different tank, and with a slight change in pH, the phosphate is released.”

The sponge is then free to be used again. Most remedial measures have centeered on simply eliminating phosphate from water sources, such as removing the substance from laundry detergent. But it is a nonrenewable natural resource and has value so the ability to capture and release is key to opening a market for it.

“What is innovative is anchoring the iron oxide onto the cellulose and finding the condition where with low pH you can get the phosphorous and attach it to the nano particle and then with the higher pH you release it. But to be able to use it repeatedly is what we’re looking for. It gives you a sustainability solution.”

In the lab, researchers have demonstrated success on scales from milligrams to kilograms using samples from local water treatment labs. The next step is to scale for a pilot demonstration leading to a viable product.