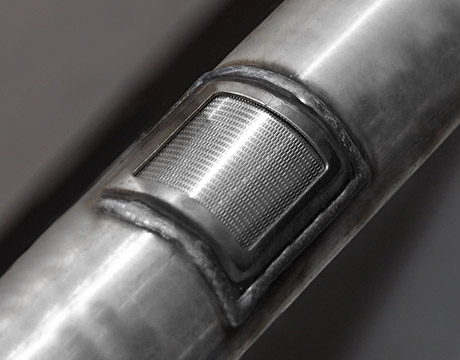 Exhaust resonators are now just a small patch on a pipe. Image: Faurecia

A new technology from Faurecia, an automotive industry supplier, reduces the size of exhaust pipe resonators close to the vanishing point. It is another example of how innovation can bring new life to old line mechanical systems.

Resonators are typically found on vehicles with long exhaust pipes. The pipe reinforces sound as it travels from the engine through the exhaust, producing annoying high-frequency sounds and harmonics.

Resonators are essentially large tubes engineered to give sound waves room to expand, lose energy, and cancel out high-frequency waves. This eliminates the most annoying sounds and lets automakers optimize mufflers to suppress lower frequency sounds.

The problem is that vehicles—even large ones—are running out of room under their bodies, said Andrew Pontius, Faurecia’s vice president of light-vehicle product lines.

“Think of the proliferation of stuff we want on our vehicles, from safety systems and actuators to all our creature comforts,” he said. “They’re all displacing each other, and at the same time the underbody is becoming more aerodynamic to improve mileage. This is driving the exhaust system into the underbody of vehicle.”

So, Faurecia set out to find a better way to suppress resonance. One well-known approach involved drilling holes in the exhaust pipe to relieve pressure. Unfortunately, the hot gases rushing out of those holes would produce annoying noises and possibly damage brake and fuel systems.

Yet that approach intrigued Hartmut Strob, the engineer who led the development of the new resonator.

“What we needed to do was to find a way to let the energy from the acoustic wave pass through an opening in the pipe without making any noise or letting out any gases.” Strob said.

He eventually hit on an idea: an array of 1,200 microperforations 70 microns wide (equivalent to two sheets of tinfoil) and 2 mm long. Although tiny, they were large enough to dissipate the energy in an acoustic wave. Yet, when gas tried to escape through them, the friction it generated created a barrier that confined the gas within the exhaust pipe.

Strob began running simulations to optimize the size and shape of the array to balance noise reduction with exhaust gas retention. His team played with different geometries and patterns, and learned how to optimize the resonator for a range of frequencies. He ultimately ended up with an array of 1,200 microslits.

Still, the resonator screen posed material issues. Conventional exhaust systems and mufflers are made of ferritic steel, which stand up well to water, salt, and exhaust gases. Yet they have no openings. The resonator’s 1,200 openings would be vulnerable to corrosion that could eventually block them.

Strob’s team switched to a high quality stainless steel, but it had twice the thermal expansion rate of the ferritic exhaust pipe. Their design ultimately sandwiched the stainless screen inside a ferritic frame that attached to the exhaust pipe. This enabled the screen to expand and contract within without pulling free from the pipe.

It proved surprisingly easy to source the screen. The food industry has been using microperforated screens as filters for decades, and knows how to make them to order.

“It’s a mechanical process,” Strob said. “We start with a coil of stainless steel 0.3 mm thick and 300 mm wide. A press with a tool that looks like a lot of rectangular knives drops down and cuts slits into the coil. This bends the coil, which gets stretched lengthwise to open the slit geometry and pressed down again flat.”

Although the factory must regrind the knife tool every two shifts, the process works great for volume production. That is important, since the resonator is now installed on the Chevrolet Silverado, the best-selling U.S. large pickup.

“We approached General Motors five years ago and that was the beginning,” Pontius said. “Now, it is on 600,000 trucks. GM didn’t place a bet on low risk program, but on their crown jewel.”

Faurecia is also looking to shrink mufflers. It is the world’s largest producer of passive valves, which adjust the flow of exhaust gases from the engine. This attenuates noise enough to downsize mufflers by up to 30 percent. Its new active valves provide additional noise reduction while controlling exhaust back pressure to improve engine performance.

What we needed to do was to find a way to let the energy from the acoustic wave pass through an opening in the pipe without making any noise or letting out any gases. Hartmut Strob, Faurecia.