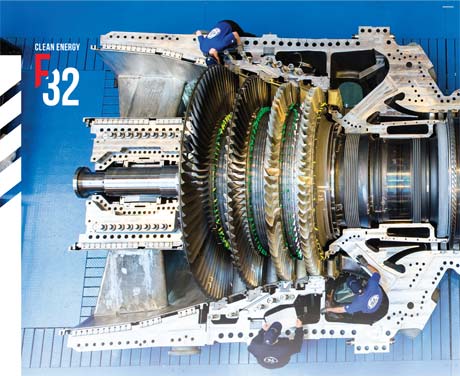 They are obscure today, but there was a time when Glenn Cunningham, Arne Andersson, and Gunder Hägg were household names. Those men, and dozens like them, were probing the boundaries of human performance as they sought to become the first person to run a mile in less than four minutes. After twenty years of gradually inching closer to the mark, the feat was finally accomplished on May 6, 1954, by the British runner Roger Bannister, who then held the world record for all of 46 days.

Over the past couple decades, engineers who designed and developed combine-cycle gas turbine generating plants have pursued their own records. Those plants comprise a Brayton-cycle gas turbine which sends its hot exhaust to a boiler to make steam to drive a Rankine-cycle electric power steam turbine. Thus, such plants wring two units of work from one unit of fuel.

By themselves, the largest single-cycle gas turbines are astonishingly efficient, with thermal efficiencies in the 30-to-40 percent range, going as high as 44 percent. But for years the goal for combined-cycle plants was to reach a thermal efficiency of 60 percent, which is about twice the efficiency of a standard steam turbine plant. As the major manufacturers in the market for gas turbines for electric generation, Siemens and General Electric poured money into the chase and put their reputations on the line.

The mark was finally set by Siemens at a plant in Irsching, Germany, in 2011, where the combined cycle SCC5-800H unit reached a thermal efficiency of 60.75 percent, with an electrical output of 578 MW.

The technology continues to improve, as does the output. Last year, General Electric reported 62.22 percent for its 9HA.01 combine cycle plant in Bouchain, France, with an output of 594 MW.  And now manufacturers are targeting 65 percent thermal efficiency, approaching thermodynamic limits set by Carnot.

Even now, however, these large combined-cycle gas turbine units are the most efficient heat engines in mankind’s thermodynamic history. As technological and engineering feats, those efficiency marks are impressive.

Looking at the current and future course of the gas turbine industry, however, there are signs that record-breaking efficiency together with rock-bottom operating costs will not be enough to actually grow the electric generation portion of the market.

To get full sense of the direction of the industry—not just for electric power generation but also for marine and mechanical applications and jet engines for commercial and military aviation—each year I turn to Forecast International, a market research firm in Newton, Conn. FI computes for me a financial picture of the gas turbine industry, its history, current state, and forecasted future.

Using its computer models and extensive data base, FI’s Stuart Slade has computed the value of worldwide gas turbine manufacturing production from 1991 to 2016, and has predicted values to 2031. (FI considers production figures to be more accurate than reported sales.)

In 2016, for instance, FI calculated the value of production for the total aviation market to be $66 billion, a small increase over the $65.6 calculated for 2015. That flat growth is due to a split in the two major sectors in the aviation market. The value of production for military aviation, where many innovations are first proven, declined to $7.5 billion in 2016, from $8 billion the year before and $8.4 billion in 2014. Far larger is the commercial aviation sector, and that saw steady growth, to $58.6 billion in 2016 from $57.6 billion in 2015 and $56.4 billion the year before that. Indeed, commercial aviation accounts for more than 75 percent of the total gas turbine market.

What’s more, that share is projected to rise, due to the booming market in commercial airliners. Between them, Boeing and Airbus built more than 1,400 aircraft last year, and about a third the price tag for each plane was devoted to the cost of the jet engines. FI projects that the worldwide value of production for commercial aviation gas turbines will increase by 33 percent over the next 13 years to reach $80 billion in 2030. The Economist reported recently that analysts believe engine companies will see more than $1 trillion in sales over the next two decades, and Forecast International’s projections suggest that this is a conservative estimate.

If the projection for the jet engine market and the rest of the gas turbine industry are on the mark, by 2030 commercial aviation will account for 82 percent of the total value of production.

Airlines are reporting some problems with the new engines, but nothing major. For instance, some early versions of the PW1100G engine required longer start-up times, but that issue seems to have been resolved. There have been no problems reported with the new, innovative fan drive gear system.

The promise of these new engines is greater efficiency, and both the PW1100G and the LEAP engines are meeting that promise. Airlines flying those new engines are reporting fuel savings of 15 percent on shorter flights and up to 20 percent on longer flights. Some are able to add new destinations—because of aircrafts' longer range with these fuel efficient engines.  This, combined with significant engine noise reduction (especially with the P&W geared fan) is a technological win-win.

While the outlook for commercial aviation gas turbines is bright, the non-aviation segment is decidedly clouded. According to Forecast International, production of gas turbines for marine systems such as cruise ships has grown rapidly after a sharp decline in the Great Recession and the value stood at $580.9 million last year. Mechanical drives, such as those used along natural gas pipelines to power compression stations, had a value of production of $1.7 billion in 2016, about 2 percent less than the year before.

What’s more, the projections for gas turbines produced for electric generation are now similarly revised downward, erasing an astonishing $123 billion in value of production. Such revisions—and revised prospects—don’t occur without reason. Based on input from FI’s Stu Slade and other data, I believe that there are several interlinked trends affecting orders.

To start with, while analysts have focused on the growing demand for electricity worldwide—a demand that gas turbines are poised to meet—the average output of each individual gas turbine unit is also increasing, and at a rate that’s faster than that of electricity demand. “This means that the requirement for additional power can be met by fewer individual units,” Slade said. “The growth of electricity demand is not translating into a proportional demand for new plants.”

Next, the remarkable efficiency of combined-cycle plants is working against gas turbine production. The extra power that a combined-cycle plant can wring from a given unit of fuel comes from the addition of a steam-generation system and steam turbine, not a gas turbine. While that efficiency is good for utilities and great for the environment, it reduces the number of gas turbines that must be produced to generate the same amount of electricity.

There are a couple extrinsic factors, as well. According to Slade, in Europe and other parts of the world, the heavy emphasis on reducing emissions and resource consumption has resulted in large subsidies for the renewables sector. Indeed, Slade said, these subsidies are so great that it forces conventional power generation to be operated at a loss under certain situations.

As a result, new gas turbine power generation facilities have been mothballed on completion without ever generating a watt of power. A few years ago when I toured the Irsching power plant in Germany, a representative of E.ON, the plant’s owner, told me that they were running it only a few hours a day in response to the unfavorable German rate structure.

“In the longer term,” Slade said, “increasing power demand will be met by opening up these mothballed plants, thus causing the medium-term dip in demand. In effect, there is a bow-wave of reserve capacity that is limiting demand.”

Finally, in spite of reports to the contrary, coal power is not dead. Many countries in Eastern Europe and Asia still rely on their coal resources and build coal-fired power plants when they need to add generating capacity. In the United States, the uncertainty over the long-term policy toward coal power has raised the prospect of plant owners essentially running their coal-powered generating assets into the ground, producing as much cheap (but dirty) power as they can, while they can.

All of this impacts the prospects for the gas turbine market.

The Case for Optimism

In recent years, the use of gas turbines for electric generation has had many boosters, myself included. The energy writer Vaclav Smil once listed the laudable aspects of gas turbines, among them: “They are exceptionally reliable and relatively easy to maintain; their service is almost instantly available: they can reach full load within a few minutes and hence are perfect for covering peak load or other sudden fluctuations in demand; because they are air cooled, they (unlike steam turbogenerators) do not require any arrangements for water cooling.”

It is difficult to dispute that gas turbines provide some of the cheapest dispatchable power available to grid managers. The U.S. Energy Information Administration recently tabulated the latest estimates of costs of new U.S. electrical power plants, giving values of averaged levelized and overnight costs. Levelized cost of electricity represents the per-kilowatt hour cost of building and operating a new generating plant over an assumed financial life and duty cycle, thus giving an average cost of generating electricity over a period of years.  Overnight cost per kilowatt is the cost of a construction project (i.e. the power plant) if no interest is incurred during construction, as if the project was completed “overnight.”

The EIA looked at both simple and combined-cycle gas turbine power plants burning natural gas, as well as conventional coal and nuclear plants and renewables such as wind, solar, and hydroelectricity. Both types of gas turbine plants were cheaper to build (based on overnight costs) than any other power source, around half the cost of renewables, one-third the cost of a new coal plant, and at least one-sixth the cost of a nuclear plant. In terms of levelized cost of energy, combined cycle plants edged out all others, including wind—even though wind turbines have no fuel costs—and were about 40 percent cheaper than coal plants.

Gas turbine power plants also have the advantage of dispatchability which wind, hydroelectric, and solar often do not. A recent econometric study of renewable electric power implementation, led by David Popp at Syracuse University, concluded that in the 26 countries they looked at, the use of fast-reacting fossil technologies such as gas turbines to hedge against variability of electrical supply made it more likely to result in the successful investment and use of renewables.

The takeaway here is that gas turbine power plants are cost effective and can provide a necessary backup to the variability of renewable power plants. To me, all that argues for better prospects for gas turbines in the electric generation sector than Forecast International projects. The electric grid is going to be ever more unsettled as new blocks of intermittent power are added. Gas turbines combine low cost and fast reaction time in a way that will enable the grid to handle winds dying down unexpectedly or unpredicted heavy clouds diminishing solar power output.

Even so, these revisions are a valuable lesson to engineers not to let their enthusiasm for a technology run ahead of the market forces that shape what does and doesn’t get built.