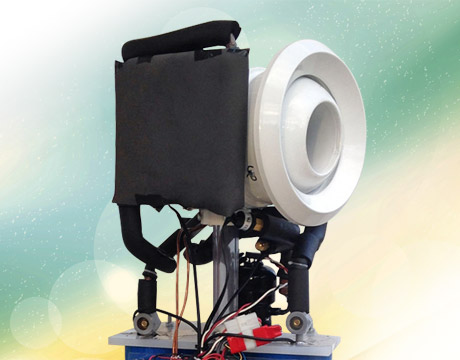 It’s tough when you differ on how hot or cool the office or living room should be. Who’s going to be forced to wear a sweater or who will be sweating bullets? If only you were around the kind of people who would always put your individual comfort first. Well, people may not be willing to do that, but a robot? Just maybe.

With the creation of RoCo, sponsored by the Advanced Research Projects Agency-Energy (ARPA-E), the hope is to reduce energy significantly through a moving air conditioning and heating system for personal comfort.

“There was a lot of analysis done to understand how people perceive thermal comfort and that analysis guides us on where we should be doing cold or hot air towards a person and at what speed and in what direction,” explains Prof. Vikrant Aute, Associate Research Scientist Center for Environmental Energy Engineering at the University of Maryland, and a key member of the RoCo team. “Then comes the hardware part.”

The first aspect is the robotic platform itself, which moves and follows a person. “It needs to be flexible and nimble enough to roll on any surface and be able to deal with obstacles,” Aute says. “We have the RoCo device where one version we’re working on is supposed to be cloud connected where Wi-Fi comes into the picture.”

The nozzle also stays on a person in a particular direction. “Our thermal comfort analysis found that to keep a person cool we need to blow cold air at an appropriate temperature toward areas of the neck, wrist, elbows, and the torso,” he says. “And if you want to keep a person warm then you blow air towards someone’s ankles so air rises up and makes a nice thermal plume around the person. The nozzle is going to adjust automatically based on this.”

Face detection is also a technology that they’re trying to employ. “This can be used to adjust the direction of the nozzle and air temperature and speed of velocity in which you blow air,” he says. “It could be possible for other scenarios as well. Think if this was used in a car and you never had to touch a vent again.”

The savings to heating and cooling with the system can be as high as 30 percent and ARPA-E wants the cost to the consumer to be in the two digits, he says.

How have people taken to it? Ro-Co was put on display at the ARPA-E Energy Innovation Summit earlier this year, he says, and the reactions included many of wonder.

“There were a lot of smiles and many asking how they could get one,” he says. “It’s encouraging where we’re headed.”

For Further Discussion
There were a lot of smiles and many asking how they could get one. It’s encouraging where we’re headed.Prof. Vikrant Aute, University of Maryland