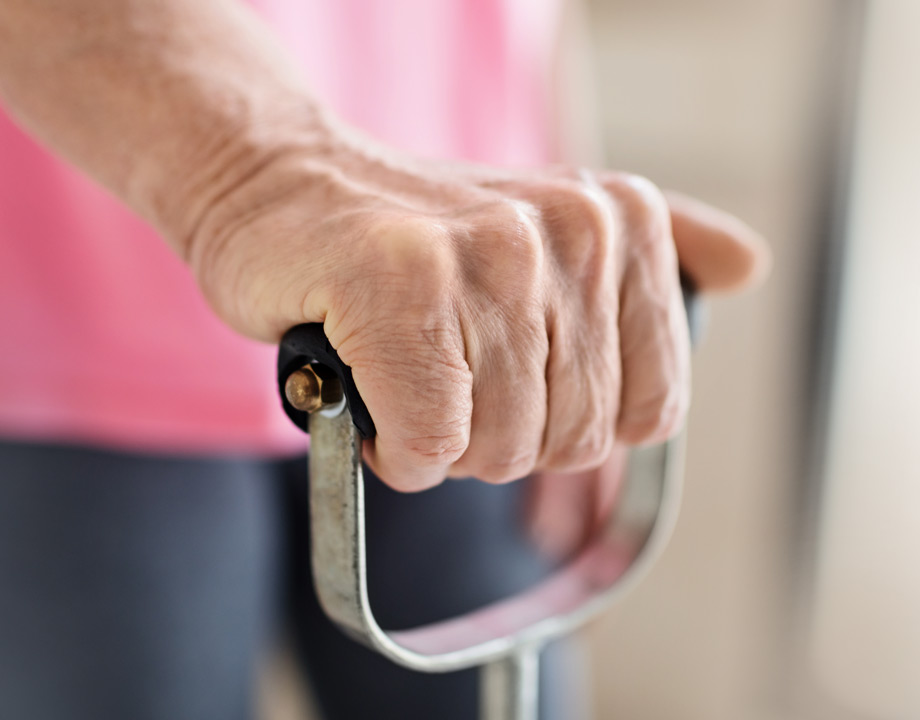 Columbia engineers are testing a robotic cane to help the elderly walk with more confidence.

Robotic Cane to Lean On

Among many ailments associated with aging, diminished self-awareness in space is the one that causes the elderly to stumble and fall while walking. Old-as-time canes and walkers offer balancing support, but they also cause accidents.

“There are a lot of accidents that happen every year,” said Sunil Agrawal, whose work has shown that novel training of robots can help humans re-learn, restore, or improve functional movements.

Even without an underlying disease or debilitating condition, as people age there are changes in the body that diminish cognition as well as sensory and motor systems, he said. A lot of people fall down when using canes because they can’t balance properly, especially in certain situations like getting out of a chair.

This has motivated Agrawal, professor of mechanical engineering and of rehabilitation and regenerative medicine at Columbia Engineering, to find a safer alternative.

By relying on electronics and computation technology, he and his team of researchers in the Robotics and Rehabilitation lab (RoAR) have developed an autonomous robotic cane that moves alongside a person and provides balance support much like one would get from lightly touching a companion’s arm.

Called CANINE, the robotic cane improves a person’s self-awareness in space when walking, which then improves their stability and balance.

The results of this research co-authored by Agrawal and Joel Stein, Simon Baruch Professor of Physical Medicine and Rehabilitation and chair of the department of rehabilitation and regenerative medicine at Columbia University Irving Medical Center, were published in the August issue of “IEEE Robotics and Automation Letters.” 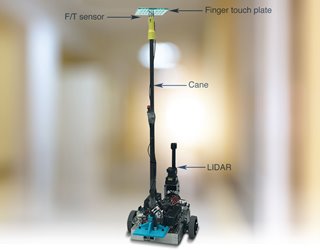 CANINE improves on user’s spatial perception for more confident walking. Image: Columbia Engineering
Researchers believe a light-touch robot can potentially provide more useful proprioceptive feedback to a person than when using a cane or walker. Proprioception is a sense sent by receptors in the skin, muscles and joints through the nervous system to the brain so that the body can sense itself in order to respond to the surrounding space. This sense deteriorates with age, and is thought to be associated with an increased risk of falls in the elderly.

Agrawal said the team faced a number of engineering challenges due to the differences in people, their heights, the length of their arms, or the way they walk.

In addition, the machine has to be able to follow robustly when the user is walking and has to see that it’s not going down an infinite hallway but going only a finite distance and the user may turn around and come back. “That means the machine has to be designed in a way so that it understands the user is at the end of their pathway,” he said. “There were challenges like that involving industrial design and motion planning.”

Inspired by the work being done with “companion” robots, the robotic cane automatically tracks a person walking and travels alongside using LIDAR technology to maintain the right distance and orientation to the user.

LIDAR, commonly used in high resolution mapping and for navigation in some autonomous vehicles, is a method of surveying that measures distance to an object or area, illuminating the target with a laser light and measuring the reflected light with a sensor. 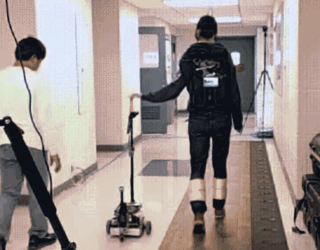 Young tester wearing a VR headset is walking while leaning on the robotic cane. Photo: Columbia Engineering
For the CANINE, light reflecting material is wrapped around the legs of the user. There is a reader on the machine that scans the environment around the user and also looks for the reflections from the sensor on the user in order to “see” where it is in respect to the user. This allows CANINE to judge where it is in the environment and maintain the right distance and orientation next to the user.

The team tested the robotic prototype on 12 healthy young subjects wearing a virtual reality headset that created a shaking environment to unbalance their walking gait in order to replicate how an older person walks.

“The subjects walked on a mat instrumented with sensors while the mat recorded step length and walking rhythm, essentially the space and time parameters of walking, so that we can analyze a person’s gait and the effects of light touch on it,” Agrawal said.

The testers completed ten passes in various conditions. When using the CANINE, they used narrower—and more stable—strides in all virtual environment conditions. Next it will be tested on older subjects, those who are likely to benefit from this technology.

According to Columbia Engineering, while mobility impairments affect 4 percent of people ages 18 to 49, the number rises to 35 percent of those aged 75 to 80 years, diminishing self-sufficiency, independence, and quality of life. Agrawal hopes his robotic cane will ease some of those issues, especially in a rapidly aging population.

“We certainly will have more elderly people in society in 25 years or so,” Agrawal said. "This is one technology that has the potential to fill the gap in care fairly inexpensively."