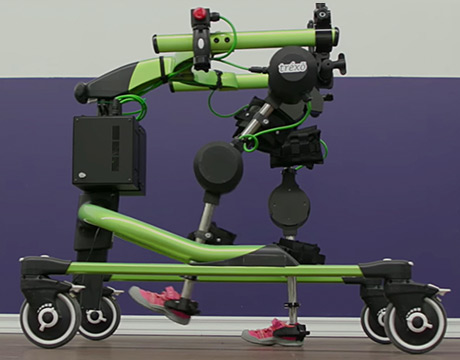 Researchers from the University of Toronto have created a wearable robot that gives wheelchair-bound children the ability to walk. The Trexo, as they call it, looks like a sleek, custom-made walker, with a few robotic joints. Those joints help children, who would otherwise never take a stride on their own, put one foot in front of the other.

Founders Manmeet Maggu, Trexo Robotics’ CEO, and Rahul Udasi, the company’s CTO, came up with the idea as students and eventually started their own business to design, manufacture and market their robot walker. Bringing the Trexo from student vision to marketable medical device has been a long process. 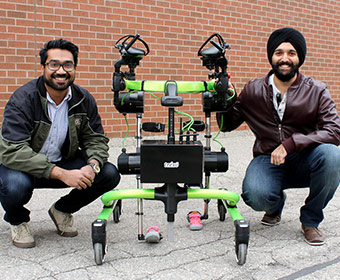 Rahul Udasi (l) and Manmeet Maggu found that designing the Trexo was easier than bringing it to market. Image: Trexo Robotics

The two robotics engineers met while studying mechatronicsat the University of Waterloo. In 2011, Maggu learned his four-month-old nephew had cerebral palsy and would likely never walk.

“That was a turning point,” he says. “We started looking into it and realized that being in a wheel chair for your entire life can have some negative consequences.” Those can include blood clots, muscle degeneration, and kidney failure. “We wanted to help my nephew get out of the wheelchair.”

A robotic device to help kids do that had already been invented. The only problem was that there were only two in Canada, and they cost $500,000. “It’s not really accessible to most families out there, including mine,” Maggu says. So he set out to fix that.

The pair decided to go back to school to develop a prototype of the kind of walker they had in mind. They both matriculated at the University of Toronto, where Udasi went for a master’s degree in the robotics department while Maggu pursued an MBA. The university has many accelerators to help students create startups while in school. Maggu and Udasi were able to win grants and prizes—first prize from the university’s Entrepreneurship Hatchery, first prize from the Help Edge competition, and a grant from the Ontario Brain institute—to the tune of $80,000.

With these funds they were able to complete their first prototype. They took it straight to India so that Maggu’s nephew, now eight, could give it a try.

When he got in it he gave a smile, and I knew he was enjoying it. Manmeet Maggu, Trexo Robotics’ CEO

They started him off with an “air gait” where he could practice moving his legs with the robot suspended above the ground. Over several sessions he learned enough to traverse the room. The boy’s parents “were absolutely thrilled.”

Want to advance your engineering career? These 12 skills will help you do it.

But there was much work to be done. The actuation system on the first prototype was fairly basic, among other issues. “There was a lot we had to rethink,” Maggu says.

More crucial than any of that was the issue of comfort.

“It cannot be stressed enough how important it is,” says Maggu. “Using a device for 30 minutes—or an hour or two—the smallest discomfort can really amplify. You could build the most amazing technology, but if it isn’t comfortable and usable, it will not work. ”

One by one, the pair knocked out these problems. They created two sizes of the Trexo, one for three- to six-year-olds, and another for six- to twelve-year-olds. Both have telescoping legs and adjustable waist and arms supports so the walkers can grow with the children. They worked with an ergonomics expert to create removable padding shaped to meet the comfort needs of children of different sizes and with different challenges. They streamlined the walker to make sure it would fit any place deemed wheelchair accessible. They powered the walker with a battery and further developed the software and control system to better detect a child’s intent.

The result is a robot that looks like a walker for the elderly with two dangling legs between the handles. Those legs have actuators at the hips and knees (the ankles remain passive). Straps and cushions abound.

Having made their walker a useable reality, they had to make it a commercial reality. The duo joined Techstars, one of many programs that help young entrepreneurs, which helped them define their business model, taught them how to build their business, and connected them with investors. “That definitely helped us tremendously,” Maggu says. The company was nominated for the “Best New Startup” award in the Canadian Innovation Awards.

The Trexo has now been approved by Health Canada, and the company is getting ready to go commercial. But they need to fine-tune the software and run a few more tests before they hit the market. The two are also working with the Cincinnati Children’s hospital to create a pilot study. They’ll also be trying to get the walker approved by the Federal Drug Administration.

“A lot of work and thought has to go into that as well,” Maggu says. “Building the device is easier.”