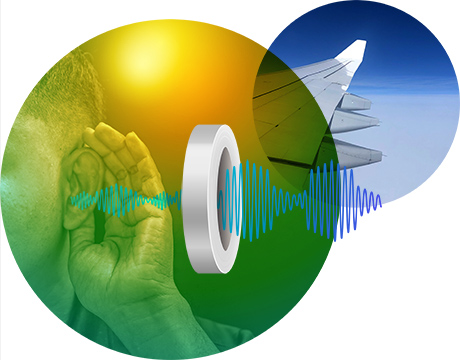 The usual solution to walling off noise pollution is to do just that: Wall it off. The thicker the barrier, the more effective for muting noise. But if you want to nab noise at the source, that method of sound proofing is not so effective. A six-foot slab of concrete behind a jet engine might eliminate some noise, but it will also prevent the jet from flying.

But researchers at Boston University have done the seemingly impossible: They’ve created a noise cancelling ring that can both quiet a jet and allow it to fly.

“We were thinking of whether we could actually design a structure that can, at some frequency range, silence the sound but preserve the ventilation,” said Reza Ghaffarivardavagh, a graduate student in Boston University’s mechanical engineering department, who spearheaded the project.

The trick is to have two pathways for the air. Air passes freely through the center of the ring. The ring itself is made of helical channels that generate a wave out of phase with the wave that has gone through the center.

Ghaffarivardavagh compares the phenomenon to holding a spring with some mass at the end and moving your hand up and down. If you move your hand with the resonant state of the spring, the mass won’t move. When your hand is at its highest point, the mass is at its lowest.

To get the ring to cancel a specific frequency, Ghaffarivardavagh and his colleagues tweaked two parameters of the helical channels, the refractive index and the impedance. Eventually, the team wants to create a tunable ring that can be adjusted to knock out targeted frequencies. Silencing a larger frequency band, however, will always mean a tradeoff. To let air flow through at near 100 percent, the frequency band must be narrow. To widen it, airflow would have to be reduced. But this is not likely to be an issue with racket producers like jet engines. The broad band noise they toss off is at a higher frequency and dissipates by the time it reaches the ground. The tonal noise—which is the real irritant—would be nearly eliminated.

From Mechanical Engineering magazine: Rise and Fall of Rethink Robotics

The ring that Ghaffarivardavagh produced is, at this stage, a proof of concept. But that proof has been substantial to the ears that have experienced it. Ghaffarivardavagh and his team put a loud speaker on one end of a tube and their ring on the other. The speaker then played a tone at a volume that would have been annoying without the ring. With the ring, it was quiet.

“It’s a significant drop in then noise level you are sensing,” he said. In the future, there may be no noise level to sense at all. “We are now working on a better way of fabricating the structure, to give us a more significant performance. We can easily reach the point where the difference is between hearing a loud sound and not hearing it at all.”

Since publishing his paper in Physical Review B, Ghaffarivardavagh and his team have been inundated with emails from noise pollution victims hoping to minimize the sounds around them. “People read the paper and then imagine all kinds of applications in the house, in the car, in motorcycles,” says Xin Zhang, a professor of mechanical engineering who works with Ghaffarivardavagh. “The problem is so important.”

We were thinking of whether we could actually design a structure that can, at some frequency range, silence the sound but preserve the ventilation. Reza Ghaffarivardavagh, Boston University