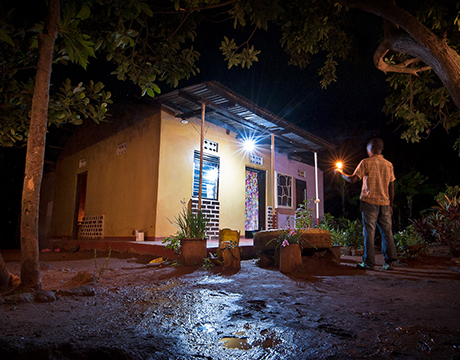 A new sensor placed on an artificial hand allows a user to feel pressure and touch. Image: Stanford University

Electricity demand has exploded alongside soaring economic growth rates in many emerging economies. But many countries find it unfeasible to finance and build large-scale electrical grid infrastructures. Solar kiosks have served as a successful off-grid alternative in some places, but they still require a sizeable investment and have proven difficult to scale quickly.

In 2009, a group of students from Imperial College London developed individual solar "kits," comprised of a portable solar panel, control unit, battery, lights and charging accessories. Because of the low-cost of solar panel manufacturing, the team was able to produce its kits cheaply and at reasonable scale.

To ensure the kits reached the people who needed them, the team set up the social enterprise BBOXX to help with scaling the product's distribution. Within four years, the BBOXX solar kits were providing power to more than 100,000 people, mostly in East Africa.

BBOXX encountered critical barriers to scalability, however, including their customers' limited access to capital to purchase the product, as well as the inherent limitations of battery-based power and the difficulty of adapting a single product for a variety of uses.

This case study examines the development of BBOXX's key solution: a remote monitoring and control system, which has enabled BBOXX to build a commercial platform for its solar units.