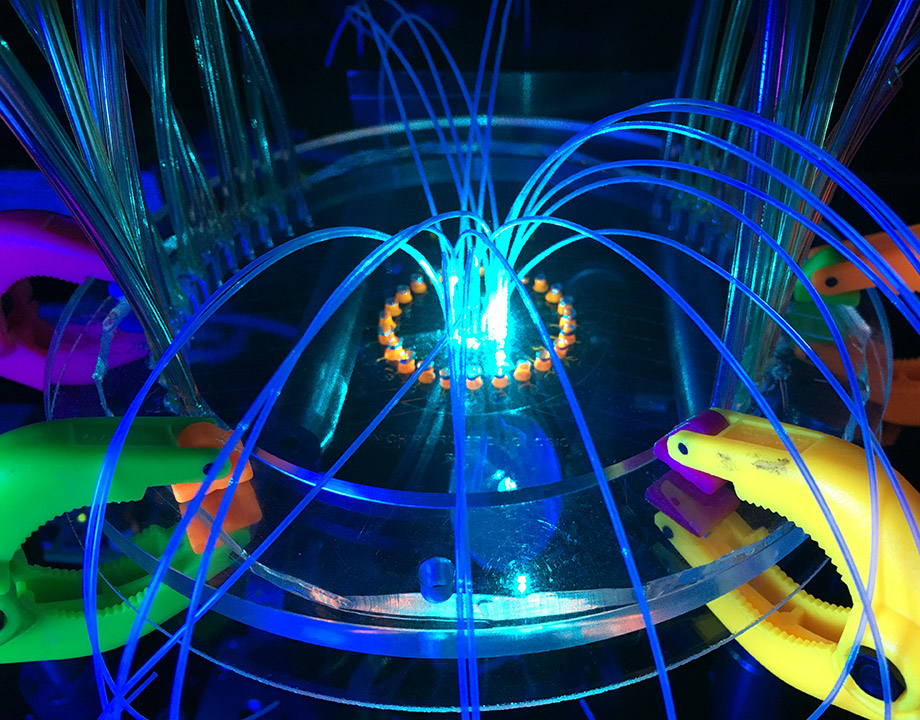 Chemical and Pharmaceutical Manufacturing Robotics
A research team at Rochester Institute of Technology (RIT) in New York has engineered a prototype micro device that can detect the deadly Ebola virus, which kills thousands of people every year. Early detection is critical for treating individuals afflicted with the virus. Rapid testing of a population using this device can also identify the limits of an infected population and help contain the spread of the disease. The detector can also be used to pre-screen for the virus.

"For example, if individuals travel from one infected community to another, they can easily spread the epidemic,” said Ke Du, research leader and assistant professor of mechanical engineering at RIT’s Kate Gleason College of Engineering. “Before any symptoms such as cough or fever become apparent, individuals who are infected with Ebola can be identified using our device and quarantined.”

Du has been working on a rapid point-of-care detection system for the Ebola virus since 2015. During his post-doc training at University of California-Berkeley, he collaborated several times with professor Peiwu Qin, an expert in CRISPR technology. One of those discussions led to the idea of using CRISPR gene-editing technology to monitor and detect the nucleic acid (RNA) markers that indicate Ebola virus.

Results using the prototype device have been promising: Ebola RNA can be detected within five minutes by combining automated sample processing, fluorescence sensing, and a unique CRISPR-Cas13a assay that originated from a bacterial adaptive immune system. This technology offers several advantages over existing methods, which take much longer and require complicated solid phase extraction.

Du’s microfluidic device is an automated small chip with a highly sensitive fluorescence sensing unit embedded into the device. Physicians take blood samples from patients and mix them in the device with CRISPR reagents, where any Ebola RNA can be seen by activating the CRISPR mechanism. 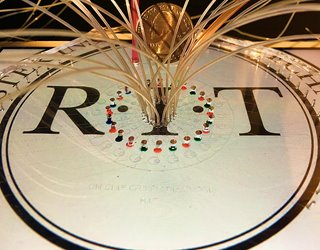 The microfluidic chip is driven by micropumps and can run 24 assays at the same time. Image: RIT
The fluorescence-based system utilizes a biochemistry array for in-field pathogen detection and uses CRISPR gene-editing technology to monitor and detect nucleic acid markers. One of the engineering challenges was developing a micropump that automatically introduce the Ebola virus and CRISPR reagents to react. The system requires the integration of the microfluidics device with solenoid valves, driven by a LabView program, “which required the integration of the software program with hardware components,” said Du. “Another challenge was the integration of the automated microfluidic system with a sensitive fluorometer to act as a complete sensing unit. This required designing the optical system so that it seamlessly integrated with the microfluidics.”

Within the fluorometer, a continuous-wave 488-nm laser directly excites each sample solution in the microfluidic chip’s reservoir. When bound to target viral RNA at exceedingly low concentrations, Cas13a, one of the CRISPR-Cas systems, releases fluorophores that are detected by the fluorometer.

You May Also Like: Lab-on-a-Chip Could Replace the Diagnostics Lab

“This isothermal and fully solution-based diagnostic method is rapid, amplification-free, simple, and sensitive, thus establishing a key technology toward a useful POC diagnostic platform,” said Du. “I am fascinated by this rapid, precise, and powerful technology. For example, we can report the presence of Ebola RNA in five minutes with very high sensitivity. More importantly, this reaction happens in solution, which is very convenient to use.”

Du’s objective is to develop a low-cost device that is easy to use, especially for medical teams working in developing countries or areas where there are outbreaks. His detector is a great start—the compact, portable unit requires no special expertise to use in the field. Analysis is approximately 25 times faster than with polymerase chain reaction (PCR), the current standard technology. It can screen 24 subjects at the same time and process 24 samples in about 30 minutes. Du has received several inquiries from companies that are interested in commercializing this technology.

Currently Du is developing a device that will detect multiple virus strains, from Ebola to influenza to zika.

There are over 70 different CRISPR Cas proteins, and we only know a small group of them,” he said. “For example, we are now looking at a different CRISPR Cas protein that can detect double-stranded DNA. We are testing this system for viruses with double-stranded DNA. We are also trying to make our device more sensitive and smaller in size.” Du’s long-term goal is to make a portable device that can easily detect many different kinds of pathogens in bodily fluids in only a matter of minutes.

“Having early detection systems to help screen for all types of diseases and patterns will be very useful because they can provide information to physicians and microbiologists to help develop vaccines, and aid in early detection and identification to control and even prevent outbreaks," he said.

Mark Crawford is a technology writer based in Corrales, New Mexico.