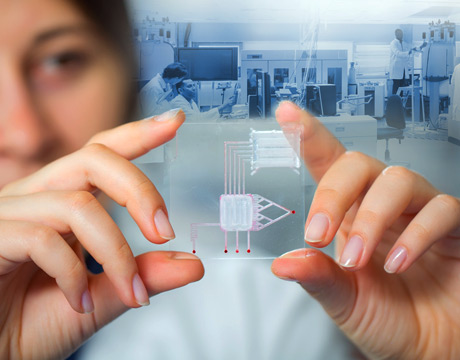 Lab-on-a-Chip Could Replace the Diagnostic Lab

In another example of how engineering is playing an important role in improving the way medical care may be delivered all around the world, a professor of mechanical engineering at the Rochester Institute of Technology’s Kate Gleason College of Engineering is taking a different approach to emerging lab-on-a-chip technology.

Michael Schertzer is leading a team developing digital microfluidic devices that can be used to assess biological fluids by introducing electricity. The devices are, in effect, small, portable laboratories for diagnosing diseases, and the hope is that the credit card-size devices will eventually replace all of the equipment of a traditional laboratory. The potential benefits are faster results and lower cost, making them especially valuable in remote or impoverished areas where no traditional laboratories are located.

“When most people think of microfluidic devices, they think of a pipe and making it small,” Schertzer explains. “You have a channel and you push fluid through it. What’s different about what we do is that we don’t have a channel. We have two plates, a top and bottom, and a checkerboard of electrodes. By applying electric fields, we can make small droplets of fluid and move them around the checkerboard of electrodes.”

In addition to the general benefits of lab-on-a-chip, this approach allows the device to be more flexible in several ways including in the number and types of reagents it can handle. “If we’re doing a biological test that has many different biological fluids in it or different reagents, we can do that without increasing the complexity of the device,” he says.

“If you are doing the test with a channel microfluidic device, it can be difficult to do protocols that have lots of different reagents because of the complexity of the fabrication,” Schertzer says.

The digital device also allows testing in different ways. For example, in a hospital, testing could be done on multiple patients for one particular biomarker, for instance, for brain cancer. With the same device it could be testing someone at home for diabetes. Another use for the same device is to look for many different biomarkers at the same time in a single patient.

“A lot of microfluidic devices with a channel are attached to things like mechanical pumps or valves. Our devices, because they are all electronic have no mechanical parts,” give another advantage, Schertzer says. All is needed is a power source and switching mechanism. Applying voltage to the checkerboard requires “some sort of computer brain” to serve as a controller, which could be something small such as Bluetooth on a cell phone.

Schertzer said there are still some engineering challenges, mainly related to being able to autonomously control the droplets moving around in space. In other ways, these devices are easier because they don’t have channel pumps and valves that have to be dealt with, he said.

The team is also interested in integrating digital microfluidics with other forms of microfluidics to capitalize on the benefits of both. With digital, there are advantages in multiplexing, but other researchers at RIT are working on other forms that offer other advantages. The team is looking at whether there is an interface that can be incorporated to go from a channel-based device to the digital device, and can they integrate something to allow cell sorting or particle separation in the digital platform. “Those are the kinds of questions we are trying to answer now,” Schertzer says.

While he envisions the device first being available to medical centers, ultimately he’s thinking that perhaps it could be something non-medically trained people could use at home, testing for any concerns - for example, prostate cancer. “It would be amazing if you do these tests at home and then beam something out to your Apple watch to tell you that your levels for this protein are high. And then the watch would respond with ‘here are some interventions for that.’”

Schertzer’s general timetable is that it will take one to three years to iron out the technical problems so that prototypes for devices for biological testing or gene therapy could be ready in three to five years.

He became interested in the health care field while attending a conference on microfluidics in Turkey as he was working on his Ph.D. At the time, he was more interested in heat transfer, but when he heard speakers talk about the use of microfluidics in fighting conditions like cancer and diabetes, the opportunity to help people appealed to him.

Now he delights in seeing that same kind of spark ignited with students in his lab, who may have decided on engineering because they were good in math and physics and hadn’t really thought about the final impact engineers can have in so many areas. “Engineers sell themselves short about that and also about the creativity you need to be designing things like this,” he says.

For Further Discussion
It would be amazing if you could do [diagnostic testing] at home and then beam something out to your Apple watch to tell you that your levels for this protein are high.Prof. Michael Schertzer, RIT’s Kate Gleason College of Engineering