Putting Greenhouse Gases to Good Use

Putting Greenhouse Gases to Good Use 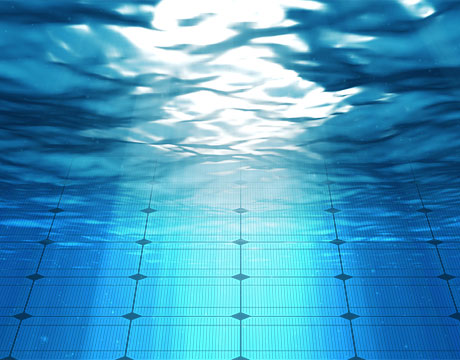 After many years of work, engineers at Stanford University have developed solar cells working underwater that can provide enough energy to produce chemical reactions for converting captured greenhouse gases into industrial fuel. The solar cells are a critical component of a new way to fight climate change in a process called artificial photosynthesis.

The work is being done in the lab of Stanford professor and materials scientist Paul McIntyre, a pioneer in the artificial photosynthesis field. The researchers reported on the latest breakthrough in a paper published in the journal Nature Materials last October.

The concept is that greenhouse gases are captured and channeled into giant chemical tanks, where the water-resistant solar cells turn the carbon dioxide/water combination into solar fuels. This is yet another instance of engineers observing and emulating nature for solutions to modern day problems. In nature, green plants use energy from the sun to convert water and carbon dioxide into chemical energy, the sugar or glucose that fuels a plant’s functions and activities.

The key challenges have been keeping ordinary solar cells from corroding under water and then finding a way for them to capture enough sunlight to provide sufficient energy. McIntyre’s lab was able to shield the solar cells from corrosion in 2011 by coating the electrodes with a protective layer of transparent titanium dioxide. However, even though the coating was very thin (the thickness of a sheet of paper would require 25,000 layers), the cells still could not absorb enough sunlight to produce adequate power.

In the recent paper, Andrew Scheuermann, who has been working on the second challenge as a doctoral student and will soon be awarded his Ph.D. in materials science and engineering, reported making the cells more powerful by adding a layer of charged silicon between the titanium oxide and the basic silicon cell. The cells have set a record for solar energy output under water and can produce enough energy to operate various systems.

“When we first showed this technology in 2011, these materials lasted for only eight hours,” Scheuermann says. “It’s now [January] been tested for many months and is still running. It’s showing that this indeed will work.”

He made the solar cells more powerful by adding a layer of charged silicon between the protective transparent titanium oxide and the basic silicon cell. The charged silicon layer acts as a booster to the bottom active layer that absorbs sunlight and excites the electrons.

Scheuermann likes to explain the process by calling it reverse combustion: “Your car combusts fuels, blows them up literally. Then exhaust comes out at the end. We take that exhaust, reverse combust it with sunlight back into the fuel.”

He notes that the very best material for converting sunlight into useful energy is silicon. What this work did was figure out how to increase the power of the devices to match the photovoltaics in solar cells on roofs. “Before it was only halfway there with sub-optimal silicon,” he says. “With the understanding reported in our paper, we were able to get an efficient device that had both the protection and the types of power that we know silicon can achieve.”

The “a-ha” moment came when the researchers were looking at a number of different cells they had made to identify why some were doing better than others. “It was a long process overall, but there was that one moment where I said, ‘That’s it!’” referring to the charged protection layer. “We knew what experiment we needed to do to prove if that was true. The experiment went beautifully, and we were able to publish the work,” he says.

There is still more work to be done, however. Just as photosynthesis in nature is a two-part system, most scientists, including Scheuermann, believe two solar cells working together are needed to complete the process. “Like a battery having an anode and cathode side, we need a solar cell on both sides, which in total provides the power to drive this very efficiently. Our [work] has given sufficient power on the anode side. The anode is more difficult to do so that’s very promising. The cathode shouldn’t be as hard, and some people have already made a lot of progress with it,” he says.

Some additional optimization of the power is possible, but the biggest challenge is combining the different storage cell varieties into one operating system. “It’s an integration challenge first and then a scaling challenge,” he says.

The technique used to make the protection layers is actually well developed today in the semiconductor industry to make small devices like smartphones, but has not been used at the scale required. He predicts that systems should be ready to start turning greenhouse gases into fuels within five years and then could be scaled up.

For Further Discussion
Your car combusts fuels, blows them up literally. Then exhaust comes out at the end. We take that exhaust, reverse combust it with sunlight back into the fuel.Andrew Scheuermann, Stanford University