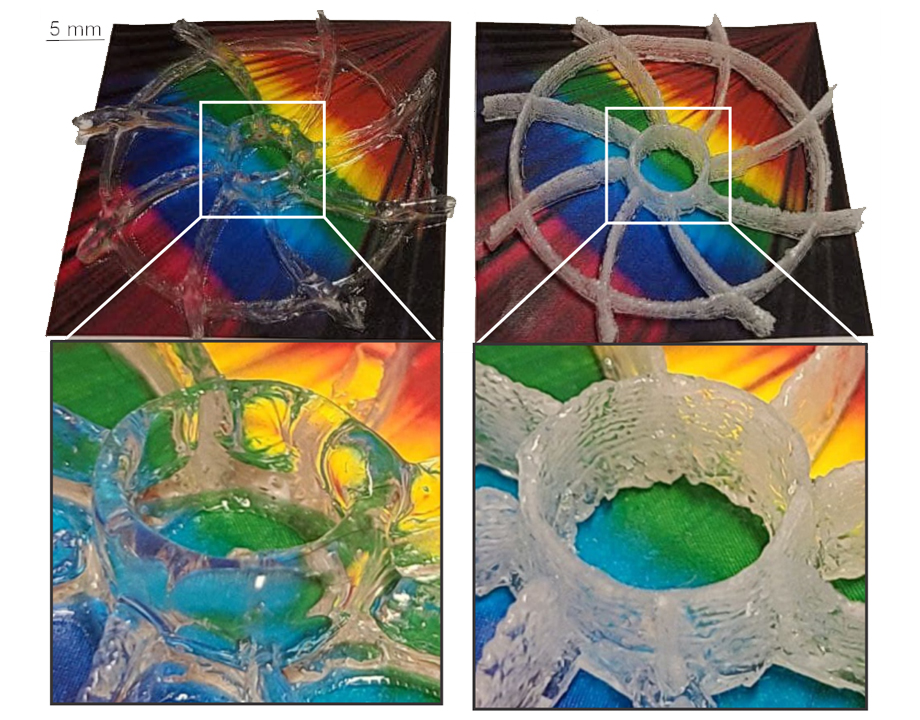 Printing Across Barriers with Sound

The now traditional methods of 3D-printing, using light and heat to build an object, have a distinct disadvantage. They can only print where the printer and the material interact, on a build plate usually, in close proximity. Which is to say, printers can’t print where something separates the printer from the printed. As a result, 3D-printed medical body parts still require surgery to be implanted and any machine that needs a new part has to be opened up.

But now researchers at Concordia University, in Montreal, have found a way to print across barriers using ultrasound. The technique could give doctors, industrial workers, and designers the ability to print where they’ve never printed before.

Muthukumaran Packirisamy, a professor of mechanical, industrial, and aerospace engineering, and his research team, were working with sound waves for the cleaning of ablation machines when the first spark of the idea hit him. At focused, super high frequencies, sound waves create cavitation—in essence tiny bubbles that create intense pressure and extremely high temperatures in a very circumscribed location. The same technique, Packirisamy realized, could be used to alter a polymer. 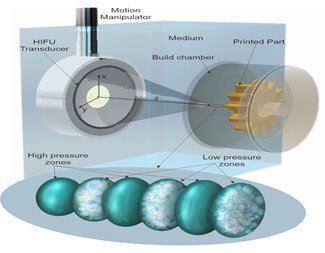 In detailed view of printer, bubbles are created in low-pressure zones. Credit: Muthukumaran Packirisamy
“The trick here is optimizing the parameters to create the right conditions so we can locally melt material based on acoustic power,” said Packirisamy.

That trick turned out to be pretty tricky. He and his team tried experiment after experiment trying to get various polymers to solidify from ultrasound cavitation. By the time they started working with their fourth polymer—years into the project—the only thing that had solidified was their sense of frustration.

“We thought we might be completely wrong, that we had wasted two or three years of our life,” said Mohsen Habibi, a research assistant at the University’s Optical-Bio Microsystems lab, and lead author of the paper "Direct Sound Printing," published in April in Nature Communications.

More for You: 3D Printing Serves Up the Main Course

The team was ready to stop work and move on to other things.  “If it didn’t happen at that time, we wouldn’t have worked on this project anymore. It would have vanished. It was the last try we wanted to do,” said Shervin Foroughi, also a researcher in the lab.
Finally, though, the polymer hardened. “A point only, very rough and inaccurate. Justt a spot,” said Habibi. “It was a great beginning.”

The team’s technical challenges were not their only ones. Their work coincided with the height of the pandemic, and they had to receive special permission to work in the lab at a time when no one else was going into the building. But the team was filled with determination and passion to continue. 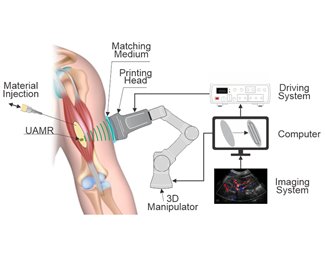 Using sound, printer could work through skin to print inside body. Credit: Muthukumaran Packirisamy
“That’s the beauty of engineering,” says Packirisamy. “We look for problems.We’re the only creatures on earth that try to find problems and solve them.”

The team now has printed many things with the new technique: gears, impellers, maple leaves, honeycombs, ears, and noses. They also showed that the printer can work through a barrier.

The printer built its objects with the ultrasound generator—the print head—separated from the target polymer by water, membranes, and, in one experiment, pig skin.

“Soundwaves can pass through material that light can’t pass through,” said Packirisamy. “Now we can print inside the body from outside.”

Editor’s Pick: A Morphing Nozzle for the Fourth Dimension

The new printer will have applications anywhere there’s an interior that’s unreachable, such as nuclear vessels, pipes, and fuselages. It could make certain surgeries as noninvasive as possible.

Though the researchers have effectively proven their concept, bringing it to market is going to require more time an effort than developing a more traditional 3D printer. “It’s not like lasers where there are tons of sources to buy from,” said Packirisamy.

Despite such hurdles, he thinks there’s no reason to believe their printer would be any more expensive than other similarly sized 3D printers now on the market. Soon we may be able to print wherever we need to, undeterred by the surfaces and boundaries of our world.