Help may soon be on the way for the 1.25 million Americans dealing with Type 1 diabetes. Using a predictive algorithm together with a mechanical insulin pump, researchers are successfully testing a new artificial pancreas that automates the routine of measuring blood sugar, calculating insulin doses, and injecting insulin that diabetics must do throughout the day.

The device, developed at the University of Virginia’s School of Medicine’s Center for Diabetes Technology, is now undergoing clinical testing. Because the device’s predictive software had been used in hospital settings previously, the U.S. Food & Drug Administration permitted the researchers to skip to human trials without large animal testing based on computer simulation evidence.

The human pancreas produces hormones, such as insulin and glucagon, to regulate the amount of glucose, a sugar, in the bloodstream. Ordinarily, it senses various biochemicals produced by the active or resting body to determine just how much of those hormones to produce. In diabetes, this feedback system breaks down.

An artificial pancreas works much the same way. While it is not a replacement organ, it does use closed-loop controls to monitor glucose levels under the skin and automatically inject insulin when needed. This allows diabetics to live more normal and more active lives, and even participate in sports.

The National Institutes of Health has funded four artificial pancreas clinical trials to gather data for FDA approval. Most of these systems are small and automated and they communicate wirelessly.

They also differ in some ways. One, developed by Boston University biomedical engineer Edward Damiano and Harvard Medical School endocrinologist Steven Russell, dispenses both insulin and glucagon. Another, the FDA-approved Medtronic MiniMed 670G, is especially attuned to glucose fluctuations at mealtime though it still requires patients to take a dose of fast-acting insulin when they eat.

Controller Inside of Insulin Pump

In many ways, Control-IQ, developed by University of Virginia School of Medicine’s Center for Diabetes Technology operates along similar lines. It puts the controller inside the insulin pump and takes a blood glucose reading every five minutes. The control algorithm calculates the dosage and the pump injects a micro amount of insulin to keep glucose levels steady. Like other systems, its big breakthrough is a control algorithm that predicts rather than reacts to changes in blood sugar. This is crucial, since it takes an hour for subcutaneous insulin injections to take effect.

“We now have learned how to predict blood sugar levels and inject insulin [based] on predictive values as opposed to the current readings,” Boris Kovatchev, the center’s director, said. The predictive model is based on a simulation that Kovatchev and his team developed to understand the behavior of the human insulin system. Most of today’s closed-loop systems, he said, “use the computer simulation environment we introduced back in 2008 to refine their systems.”

Recommended for You: Breakthrough Could Bring New Cancer Treatment

In 2008, Kovatchev and his team began testing a system that combined a control algorithm based on the simulation model with continuous glucose monitoring and an automated insulin pump on hospital patients. This enabled health professionals to monitor patients closely and ensure the algorithm and model worked safely.

That same year, FDA gave the team the green light to test artificial pancreas algorithms on simulation models rather than on dogs and pigs, the usual animal models for diabetes. “That was a big deal at the time, because we basically eliminated the animal trials from the field and accelerated the development, probably by years,” Kovatchev said. 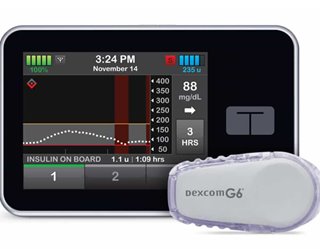 In 2012, the researchers released their first portable system, called DiAs. It had four wirelessly linked components: a continuous glucose monitor, a receiver, a smartphone-based control algorithm, and an insulin pump. Three years later, they introduced inControl, which eliminated the receiver. The researchers developed the system with TypeZero Technologies, whose founders included Kovatchev and other University of Virginia faculty. The company was acquired in 2018 by continuous glucose monitor maker Dexcom, which also worked on the project and uses a variant of the control system for its products.

The sensor, which is about an inch long, inserts a small needle (about 4 mm) under the skin. It can remain in place for about 10 days, and then must be replaced.

“It’s an easy procedure, the users can do it themselves,” Kovatchev says.

Users wear the pump—it’s about half the size of a smartphone—on the hip. It has a touchscreen interface and a reservoir that holds three to four days’ worth of insulin, which is injected into the body via a small needle. It comes with a micro USB cable for recharging the battery.

“This is a very big deal,” he said. “If you start your day well-rested, with a normal blood glucose level—that’s a very different day for people with diabetes.”

Second, the system automatically administers an insulin bolus, a dose of fast-acting insulin, which diabetics take before meals to moderate blood glucose changes after eating.

“For a variety of regulatory reasons, most systems out there are not allowed—or not yet designed—to do automated insulin boluses,” Kovatchev said.

Third, Control-IQ provides a dedicated safety system that prevents insulin overdose, which can cause hypoglycemia and potentially lead to unconsciousness, coma, or death.

“The safety system has veto power on any insulin delivery,” Kovatchev explained.

Many controllers take similar approaches to achieving the same goal, Daniel Finan, a research director at the Juvenile Diabetes Research Foundation who specializes in the artificial pancreas, said.

“Other controllers out there do similar things, but maybe in a different way,” he said. “It might be the case that the Control-IQ algorithm simply controls glucose a little bit more tightly than some of the other systems that are in development.”

There may be room for several different systems, based on user need, preference, and lifestyle. Some users may choose to set a lower glucose level, while others may want to “ride a little bit high because they’re very scared of hypoglycemia,” he said.

“That’s a user preference thing that I think that needs to be addressed a little bit more in future products,” he said.

Control-IQ has finished the final of three clinical trials that have taken place in multiple research sites and countries to generate safety and efficacy data. Tandem, which makes the pump, will then submit it to the FDA for approval.

“From everyone’s best guess, we are expecting Control-IQ to be FDA-approved sometime between July and December,” Finan said.

“When the FDA approves it for distribution, people who have this type of insulin pump will just get wireless software upgrades,” Kovatchev says. “They don’t need to change the pump. It’s like an upgrade to your phone.”

Jen Pinkowski is an independent writer.

Recommended for you: Antibacterial Copper to Heal Bones