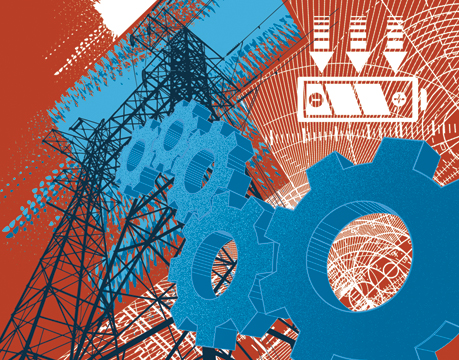 Many high-power devices need to be lightweight and more compact and some also must be able to operate in an unforgiving environment, in the rain or on salt-sprayed roads, and even while on the move.Vibration shock is another challenge to be met.

These are mechanical engineering challenges, says Joe Sarokhan, a mechanical and aerospace engineer by academic training but whose title now is senior electrical engineer at Ocean Power Technologies, Pennington, NJ, a company at the forefront of creating energy from powerful waves of the ocean.

The main obstacle to making electronics smaller is the heat buildup, Sarokhan says. “If you can figure out a way of getting the heat out efficiently, twice as effectively, then you can make the device half the size,” he says, adding that heat is always a factor, whether in electric vehicles or wind and solar systems.

According to Sarokhan, cooling and air flow analysis are things that electrical engineers don’t typically do. If mechanical engineers have some electrical background, they can pick up the power skills within a year.

Being able to convert power more efficiently is a major driver, says Sarokhan.

Even traditional vehicles, which used to require mainly mechanical disciplines, are moving from hydraulically driven systems to electric power, so knowledge of both is required.

But over time, electrical engineering evolved to focus more on digital circuits, microprocessors, and other aspects of computer science and less on high power systems. And power engineering wasn’t considered such an exciting career path any more so fell out of favor as a field of study.

But a combination of factors put Sarokhan in the midst of it in areas he never imagined. Upon graduation a decade ago when his first choice of an industry, aerospace, wasn’t doing much hiring, he went to work as a project development engineer for a company making scanning electron microscopes and miniature equipment.

“The electrical and mechanical integration was very tight,” he says.

There he learned a lot about the cooling and shielding requirements of sensors of the electronics. After several years, he joined Princeton Power Electronics, which made solar inverters and military motor drives that required an understanding of high power. “I picked up more experience in how to make electronics survive in a high impact [environment],” he says. That’s when he realized how important knowledge of both disciplines is. And now he sees the whole power engineering field starting to come back.

“I’ve had to hire people in this field and there aren’t many at all,” Sarokhan says. “I found that electrical engineers don’t have experience with high power mechanics devices, transformers, and conductors, and it was actually easier to hire a mechanical engineer and train them to become electronics engineers because packaging the high power devices is more of a mechanical issue than electrical.”

In an article, Career Focus: Power Engineering, in IEEE-USA Today's Engineer Online, Dr. Nada Marie Anid, dean of the School of Engineering and Computing Sciences at the New York Institute of Technology, said the nature of the work of a power engineer will not be the same from now on, and new skills will be required, skills that Sarokhan acquired in his early jobs.

Now, he is putting those skills to work in a device capturing the energy of ocean waves. “We are trying to put hundreds of kilowatts of electronics on a [260-ton] buoy floating at sea and deal with all the operation and shock issues as well as create long-time reliability and optimization so that everything lasts for many years.”

Converting wave energy into electricity is still in the early developmental stages. “It’s a very tough mechanical and electrical engineering challenge to get electronics to work in that environment,” says Sarokhan.