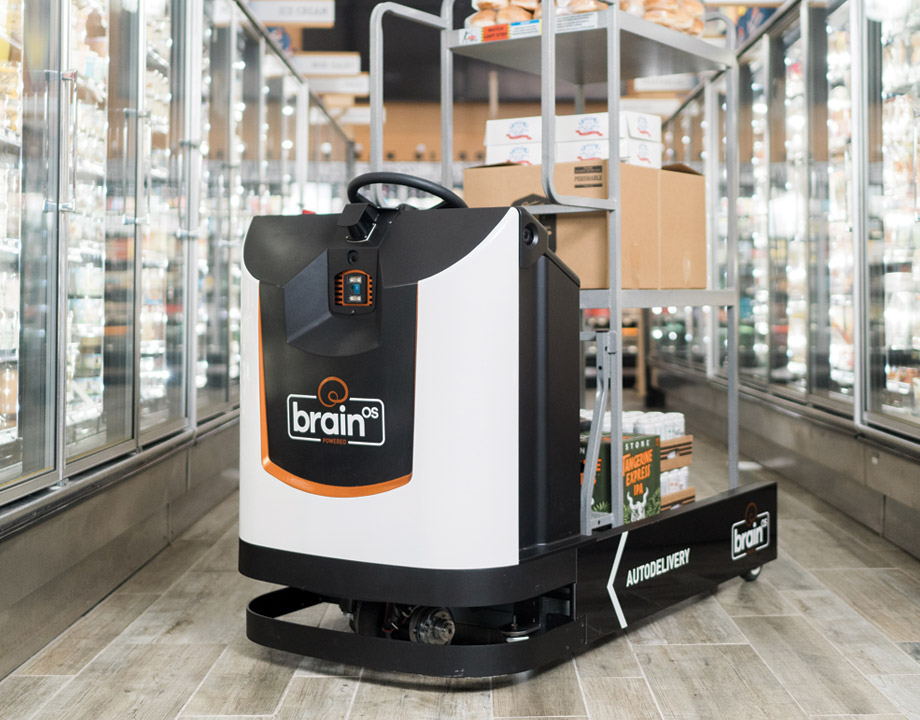 A BrainOS-powered robot in a supermarket aisle. Photo: Brain Corp.

The industrial cleaner glides across the airport ticketing lobby, systematically washing the floor under its wheels. It’s late and the crowds have dissipated. When a harried passenger unexpectedly sprints across the cleaner’s path, it stops immediately and waits. When the passenger passes, the robot’s operating system, BrainOS, gives the all clear to continue the wash job.

BrainOS, developed by Brain Corp., is a drop-in operating system for autonomous robots that takes square aim at the industry standard, the Robot Operating System. Since 2007, ROS has provided a flexible open-source framework for programming autonomous robots.

Although ROS is not an operating system (like, say Microsoft Windows or Apple OS), it has become a mainstay of robot development because it simplifies the task of building an autonomous robot. ROS performs many of functions of a classic operating system, such as recognizing and managing hardware, implementing commonly used functionality, and passing messages between processes. Recently launched ROS 2.0 supports multirobot systems, real-time communications, non-ideal networks, and extended computing capabilities. 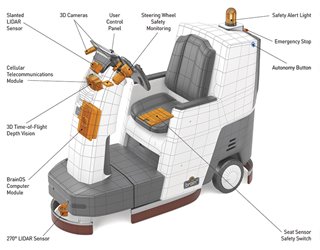 The BrainOS operating system makes it possible to control robots built from widely available components and software. Photo: Brain Corp.
ROS also sits at the center of a robust ecosystem of software vital to autonomous software operation. It links to a variety of software used for autonomous operation, such as Orocos control and communications and OpenCV real-time computer vision. Nvidia, best known for video and AI processors, and Comau, an automation company, have both launched open-source robotics hardware platforms based on ROS.


By working with the ROS ecosystem and downloading ROS subroutines that others have created, an engineer can build an autonomous robot without spending years or even months programming. No wonder ABI Research forecast that 55 percent of the world’s autonomous robots will contain at least one ROS package by 2024.

Yet ROS has a problem, according to John Black, Brain’s senior vice president of new product development. While ROS is a great R&D tool, he claims it is difficult to use for commercial applications.

“There’s a huge amount of investment required to harden ROS into a commercial system,” he explained. “It just doesn’t have the tools necessary to scale robotics safely and securely, which means you aren’t going to be able to get to a fully commercial product without an incredible amount of work to get there.”

Further Reading: What is that Robot Doing in My Supermarket?

Enter BrainOS, a novel full-stack software solution for commercial autonomous mobile robots. It traces its pedigree back to Qualcomm, which provides enabling technologies to mobile phone and telecommunications companies. At the time, the researchers, led by Eugene Izhikevich, now Brain’s president and CEO, acted as a corporate think tank. 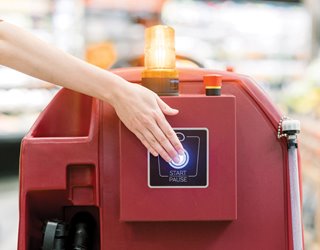 Once a technician shows a BrainOS robot a route to travel, all it takes is the push of a button to send it on its way. The system automatically recognizes and avoids people and obstacles. Photo: Brain Corp.
“In our early days, we spent about five years looking at the neuromorphic computing space, trying to understand how the brain learns and how it processes visual information,” Phil Duffy, vice president of innovation, said. “Our CEO, who is a neuroscientist, was interested in applying what we learned to the world of commercial robotics because he believed a new type of OS could provide real return on investment in the space.”

The result could be a robot that learns new behaviors with far fewer training samples.


The Right Software for Autonomous Robots


Rather than attempt to build a better robot, Brain focused on creating the right software to help run autonomous wheeled robotic platforms. While BrainOS currently controls a variety of autonomous floor cleaners, vacuums, and autonomous delivery systems, engineers could use it in almost any autonomous application, Duffy said.

“Our conversations are around helping developers automate existing manual equipment today or helping them create new-build robots that the field hasn’t seen before,” he said. “BrainOS has the tools so their robots can easily navigate complex spaces and adapt to changing environments right out of the box, then companies can build other applications—their competitive advantage type applications—on top of that.”

That starts with software that is up to the task of navigating such complex environments as supermarkets, warehouses, and airports. These areas combine static and changing obstacles, so the computer must constantly remap the environment. It must also avoid moving humans, but avoid too many false positives and it will no longer be able to work efficiently.

The same robot must also be able to map rooms, such as school gyms or ballrooms, which have few features in them to act as guideposts. It must also work in all lighting conditions, navigating when windows are darkening at dusk or throwing shadows in sunlight, all while reacting properly to reflective surfaces.

The goal, Black said, is to provide a solid foundation that engineers with limited expertise can build upon.


The company started by supply BrainOS to several autonomous floor cleaning robots, but has branched out to other applications, including stock delivery robots. It has partnered with several robot makers, including Tennant, Minutemen, ICE, and SoftBank Robotics.

One example is SoftBank’s Whiz vacuum cleaner robot. Once a technician shows the robot its initial route, then pushes a button, the robot uses multiple sensors to navigate around obstacles and people.

Today, Brain acts as an integrator, providing partners with a software development kit and other tools to help them create robots while providing support as necessary. Brain plans to commercialize the toolkit as a stand-alone product next year.

Looking forward, Brain plans to expand its offerings beyond wheeled robotics platforms to support sensors for such applications as smart buildings and Internet of Things (IoT) apps.

It also plans to leverage data from existing BrainOS robots to improve their algorithms. The company’s operating system has already accumulated nearly 400,000 hours of autonomous robot operating data. Brain plans to analyze the data to make their operating system smarter and to offer partners the ability to simulate their machines before release.

Brain, however, has deep pockets. It received $114 million from venture capitalists led by Softbank in 2017, and raised a total of $125 million since 2012. Those investors believe autonomous robots are ready to break through into the mainstream, and a plug-and-play operating system that is designed to scale will play a key role in making that happen.

“Today, robotics engineers are doing everything from building the mechanics to developing the software,” Duffy said. “We believe the future of robotics needs this kind of multi-technology operating system as a core foundation.”

Engineers could then build on that foundation, adding a navigation application or something to help with fleet management to differentiate their robot from others in the market.

By providing a standard operating system, BrainOS believes it can simplify building robots the way Microsoft simplified the production of PCs when it created DOS and then Windows.

“We think it will lead to a very different way of building robots over the next few years,” he said.

Kayt Sukel is a science and engineering writer from Houston, Texas.