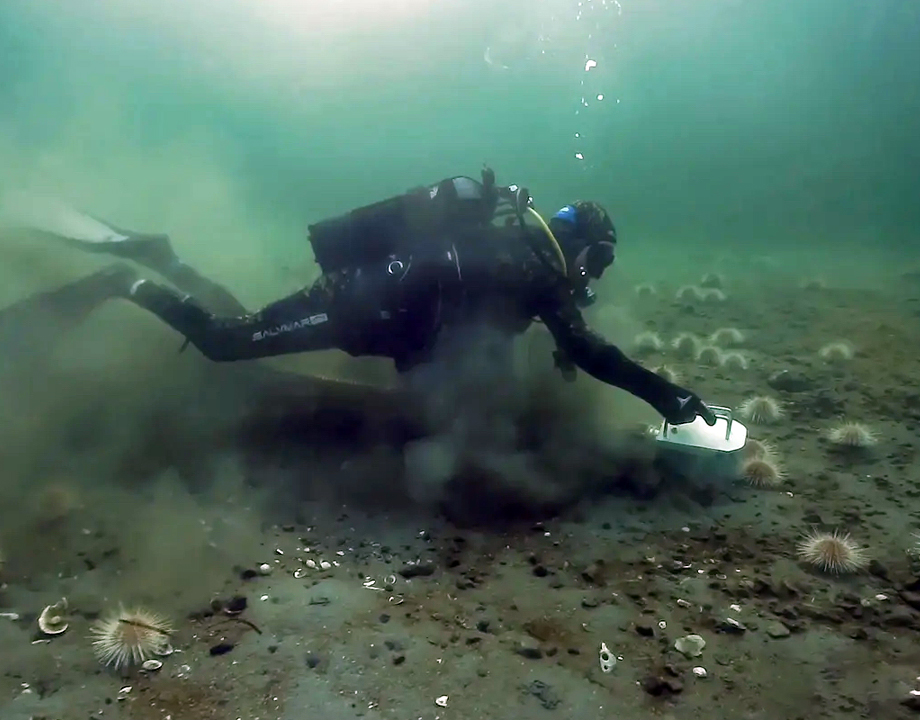 Sea urchins are devastating the seabed. Now there’s a new tool to suck them up and bring them to market.

Menacing is the sea urchin, in appearance and propagation. Round and spiked—like the business ends of so many medieval morning stars—they are growing exponentially, gobbling up the world’s kelp forests in the process. Huge swaths of underwater greenery have disappeared into the alien star shaped mouths (called Aristotle’s lanterns) of these roaming globular echinoderms, leaving “urchin barrens” in their wake. That’s a lot of naturally occurring carbon sink gone from the ocean floor.

Fortunately, sea urchins not only eat, but can be eaten. Unfortunately, they are a pain to collect. Sea urchins headed to Japan to be consumed by uni lovers are collected by divers armed with rakes and baskets. It’s such tedious work that, despite a growing demand for their meat, collecting them for food has made little impact on their population. 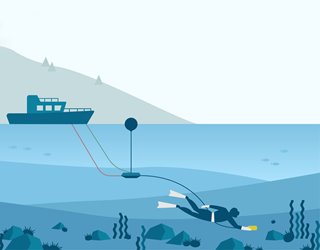 Divers manually bring the vacuum head to where sea urchins congregate. The mouth of the vacuum is sized to select for urchins.
Now there’s another way. The C Disc, produced by Norway’s C Robotics, is a kind of Dustbuster for the deep. Which is to say, it’s a handheld vacuum made for sucking up urchins.

“Hand picking is labor intensive—it becomes uneconomical if it takes hours and hours and hours to harvest a bucket to sell,” said Richard MacLellan, general manager at Miawpukek Horizon Maritime Services. “The C Disc can do it five times faster.”  A diver can now drag the sucking end of the C Disc over an urchin infested area, sending them up a hose and onto a boat above.

The C Disc can also harvest with minimal damage to the urchins and anything else that might get sucked up with them. Divers manually bring the vacuum head to where the urchins congregate, and, as the mouth of the vacuum is sized for the spiny target, bycatch is kept to a minimum. Non-urchin critters that do get picked up can be tossed back in the water unharmed.

MacLellan is working to bring the technology to the Miawpukek First Nation in Atlantic Canada. The Miawpukek have licenses to harvest sea urchins, but, without a speedy way of doing so, they don’t usually bother. With the C Disc at their disposal there’s more incentive, which would be good for the environment, their economy, and urchin roe loving gastronomes. 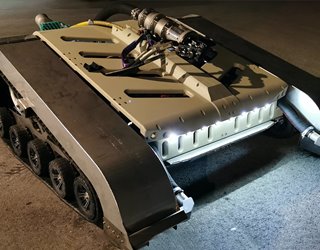 The C Bud is an autonomous vacuum that roves the ocean floor on its own. “It’s like a Roomba that you operate from a control room on a vessel,” said its developer.
First, though, the device will have to be approved for use. “In Canada, we have a very robust regulatory regime around protecting the environment and how you fish,” said MacLellan. “We are working with the regulator to prove that we are not harming the environment.” That shouldn’t be hard, though, as the robotics company has already proved just that to Norwegian regulators.

C Robotics has another robot that requires even less work from humans: the C Bud. It’s an autonomous vacuum that roves the ocean floor on its own, sending urchins up to a boat above when it finds them. “It’s like a Roomba that you operate from a control room on a vessel,” said MacLellan. Its self-driving capabilities might make it a bit harder to get approved, but that’s not the only reason that the Miawpukek Horizon Maritime Services are focusing on the C Disc instead. Where the C Disc will likely cost tens or hundreds of thousands, the price tag for a C Bud will be in the millions.

Should the technology prove to be a cost-effective method for harvesting sea urchins, it could easily be tweaked to target other species. The Miawpukek also have licenses for collecting sea cucumbers, which, without the assistance of the C Disc, is not a greatly profitable enterprise.

“I’m interested to see if we can mitigate the invasive green crab,” said MacLellan. “It doesn’t have a great fishery value, but it’s just decimating our ecology.”