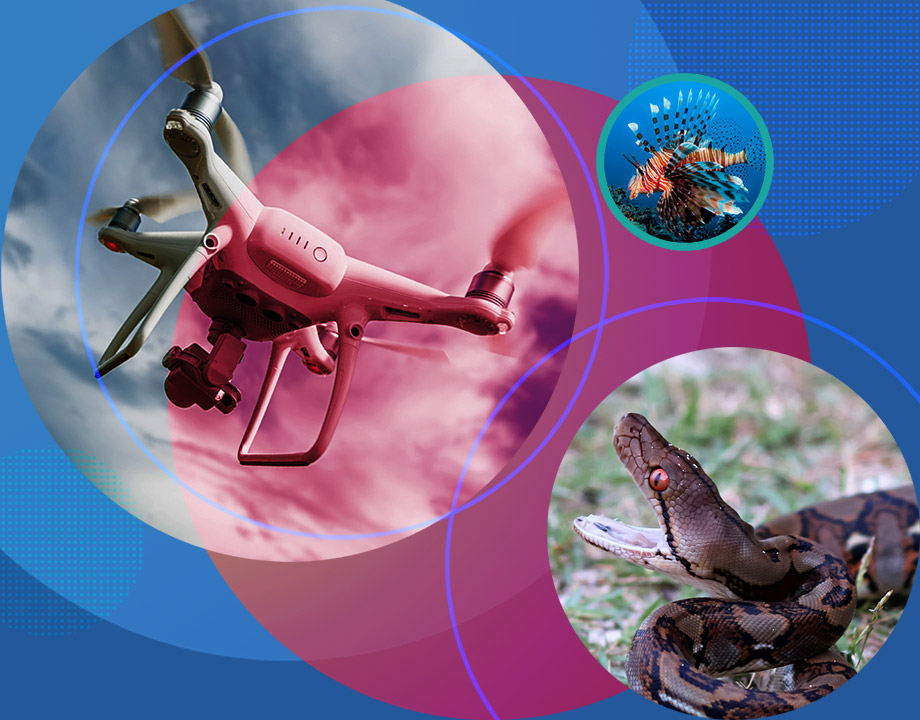 Be they fauna or flora, insect or tree, reptile or fish, invasive species are devastating wildlife and their habitats all over the world. When these intruders are transported—by human hand or machine—to new environments, they find themselves in a new world of plentiful nourishment and room for expansion. With no predators, there’s little to stop them from multiplying like mad and edging out native species.

But now invasive species of all kinds are finding that new predators have arisen, and they’re manmade. In the past few years, researchers all over the world have turned to drones and robots to help them hunt—and often kill—the plants and animals that are wreaking havoc on once carefully balanced ecosystems. Below you’ll find seven instances of machines put to the service of hunting and eliminating invasive species. 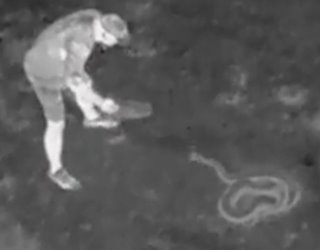 Python capture filmed with thermal drone camera. Image: VolAero Drones
1) Pythons
Burmese pythons have been eating up the Everglades for decades now. The first individuals to start the invasion were probably pets that were either abandoned or had escaped. Their onslaught was helped along when Hurricane Andrew tore up an aquarium and released hundreds of individuals in 1992. Since then, they’ve decimated several rabbit and fox species and drastically reduced possum and bobcat populations. So it’s been open warfare against them in Florida. To help locate the snakes where humans might not easily roam, python hunters have recently begun using drones equipped with thermal cameras. But the snakes, being reptiles, often take on the temperature of their surroundings. Now the hunters have a new tool for their drones, a spectral resolution camera that uses LED light to identify the pythons by their distinctive reflection. 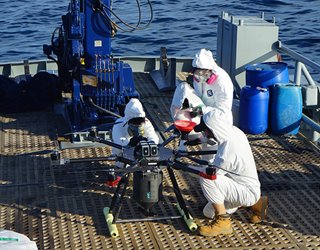 Technicians setting the drone up for the operation. Image: Island Conservation
2) Possums
The common brushtail possum is a furry, wide-eyed, undeniably cute creature. But this fact has not given New Zealand pause in their goal to kill them all—by 2050. The possums made their way to New Zealand from Australia sometime in the 1800s. In little more than a hundred years they had become a population some 50 million strong. Egg and vegetation eaters, they’ve done terrific damage to forests and birds. They’re also carriers of bovine tuberculosis and are responsible for infecting dairies. Leaving poison traps for them has been effective (the population is now down to 30 million), but other animals are attracted to the traps and eat the poison as well. Locating the possums for poison delivery has been difficult—they live deep in the forest, and they’re nocturnal. Now a company called Aeronavics has a drone to find and target the possums more effectively. It’s equipped with an infrared night vision camera as well as sensors to detect possum droppings and pheromones. By locating exactly where the animals are, the drone can drop poison precisely where they’re nesting.

3) Rats
If there’s one ecosystem that naturalists, biologists, and animal lovers would like to keep pristine and free of invaders, it’s the Galapagos. But rats have managed to get on Seymour Island, which had been free of the rodents since 2007. They’ve devoured the eggs and babies of many of the seabirds that nest there, as well as trees and cacti. In the past, helicopters and people have been used to distribute rat poison. The former is expensive—the helicopter and pilot have to come over on a boat and hang around for 21 days for the second dose—and the latter is tedious and dangerous. That makes it the perfect job for a drone. Luckily, most birds on the island are unlikely to go for rat poison, but the Galapagos hawk may eat an already poisoned rat. So, before putting the drone to work, the researchers captured 20 hawks that they’ll release once the rat-killing job is complete. Unfortunately, the two drones they were using conked out before they were done spreading poison and humans had to complete the job. But that means they will soon be able to see who is more effective at eradicating rats, human or drone. 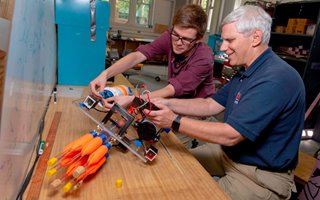 William Godsey, left, and Bradley Miller, associate director of WPI’s Robotics Resource Center, examine the lionfish harvesting robot. Image: Worcester Polytechnic Institute
4) Lionfish
Lionfish were once denizens of Indonesia, Australia, Japan, and other places in the indo-pacific. Now they’re in the Caribbean—probably thanks to pet owners dumping no-longer wanted to fish into the Atlantic—gobbling some 50 species of other fish along the coral reef. But nobody gobbles them. To remedy the situation, undergraduates at the Worcester Polytechnic Institute have created a harpooning autonomous submarine to hunt the invaders. They fed the AI that controls the robot thousands of pictures of lionfish so that it will know what to aim for. They also showed it a few pictures of scuba divers, so it will know what not to aim for. When it finds a lionfish, it fires off a spear and goes on its way. Fishermen, the roboticists hope, could use the bots to harvest the fish (making us the fish’s single predator).

The non-profit RSI (Robots in Service of the Environment) has another approach to rounding up lionfish. Their robot, which can also recognize lionfish, stuns a fish with two low-voltage panels before sucking it into a long tube. The fish can thus be easily collected to feed their primate predator later. The Guardian LF1, Mark 4, as it’s called, hit the market this June. It can reach depths of 1000 feet and costs less than $1000. The company claims that an owner can make up the cost of the machine with profits from a single day of lionfish hunting. 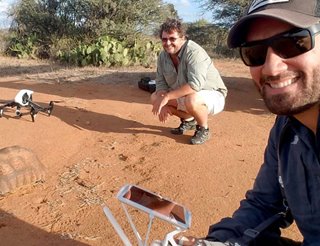 Gustavo Lozada (right) prepares his drone with Tom Silvester, CEO of the Loisaba Conservancy. Image: Gustavo Lozada/TNC
5) Vines
Animals, of course, aren’t the only invaders. Trees, bushes, vines, and cacti far from their native lands are also spreading uncontrollably everywhere, destroying other vegetation as they go. The prickly pear cactus, opuntia engelmannii, for instance, once lived solely in Mexico and in the Southwestern U.S. Now it’s working its way across Kenya in giant patches that let nothing else survive. The Loisaba Conservatory is planning on introducing cochineal insects, which feed only on that species of prickly pear. To do so, though, they need to figure out exactly where the cacti are—not a simple task when the plants are covered in sharp spines. So they’ve hired Gustavo Lozada, Technology Operations Manager, and UAV and Remote Sensing Expert from Colorado’s The Nature Conservancy to fly a drone over the invaded area and make a 3D map of the prickly pear’s whereabouts. The drone will be equipped with software that can tell one form of vegetation from another based on its shading.

6) Trees
Similarly, the Silk Oak Tree once lived in Australia. Now it’s advancing through the forests of Hawaii. Marching through the undergrowth to identify each individual is a daunting task. Instead, the Big Island Invasive Species Committee is now using drones to fly over the canopy and identify the Silk Oaks. Once located, they’ll still need humans to hike in and do the culling, but the drones will cut the work down by 75 percent. 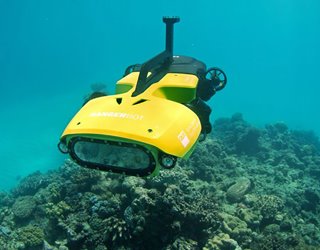 RangerBot is an autonomous underwater vehicle designed to identify and kill crown-of-thorns starfish. Image: Queensland University of Technology
7) Starfish
The crown-of-thorns starfish is, strictly speaking, native to the Great Barrier Reef. But thanks, probably, to overfishing of its natural predators, the starfish has gotten out of hand and is gobbling up the reef. Roboticists at the Queensland University of Technology have created an underwater drone that can recognize the starfish, then inject them with bile that kills them within 24 hours. Their initial starfish killer, COTSbot, was pretty expensive and required an expert to run it. Now they’ve come up with a cousin, RangerBot. It’s cheaper, easier to control, and outfitted with sensors to monitor other elements of reef health as it glides along its edge.

Read more about how the Underwater Drone Hunts Starfish