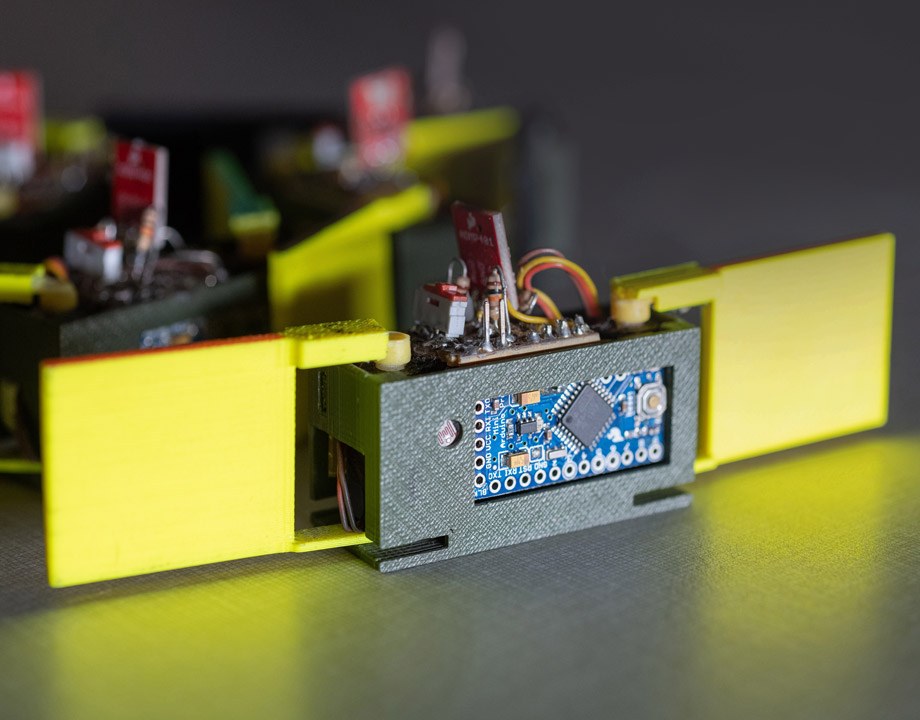 Smarticle has two 3D-printed arms, a light sensor, and a motor, but can’t move on its own. Photo: Rob Felt, Georgia Tech

New Moves for a Robot Made from Smaller Robots

Most robots are engineered very carefully using a systematic design process, with one part connected to another part, with spinning motors and with gears that turn in predicted ways. However, robots can also be constructed using random processes that result in interactions that create meaningful, controllable motion.

To that end, Georgia Institute of Technology researchers have created tiny robots they call “smarticles,” or smart active particles. These robots have only one motion—flapping two short arms. 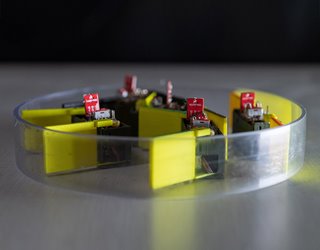 Five identical smarticles—forming a supersmarticle—interact with one another in an enclosure. Photo: Rob Felt, Georgia Tech
When a group of smarticles is confined by a circular band, they begin to nudge each other, forming a robophysical system called a “supersmarticle” that moves on its own. In addition, adding a light or sound sensor allows supersmarticles to move in response to that stimulus—with such accuracy that they can successfully navigate a maze. This new approach opens the potential for creating new locomotion techniques for robots.

“Constructing robots in a seemingly random way might seem to be at cross purposes with what most roboticists do,” said lead researcher Dan Goldman, a physics professor at Georgia Tech. “Being random can actually produce effective tasks like movement. We were less interested in designing a great robot than discovering principles by which active matter could become task-capable, which we hope one day will lead to cool new classes of robots.” 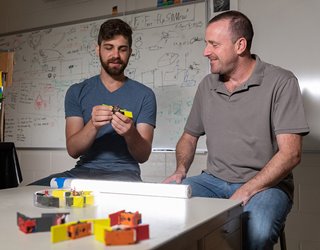 Postdoc researcher William Savoie (left) and Dan Goldman examine the features of a smarticle. Photo: Rob Felt, Georgia Tech
For the last decade, Goldman and his team of researchers have explored the basic physics of entangled granular matter (such as u-shaped particles and staples). They discovered that the strength of such ensembles was sensitive to particle shape. They then began to study how transitioning systems between phases—for example, from an entangled solid to a more fluid-like phase—is affected by changes in the shape of the constituent particles.

This research eventually led to the development of the 3D-printed smarticle, which includes a motor, simple light sensors, and limited computing power. The devices can change their location only when their flapping arms interact with other smarticles.

Mechanical engineers from Northwestern University also contributed to the project.

“Even though no individual robot could move on its own, the ‘cloud’ composed of multiple robots could move as it pushed itself apart and shrink as it pulled itself together,” Goldman said. “By putting a ring around the cloud of little robots, they start kicking each other around, and the ring—which we call the supersmarticle—moves around randomly.” 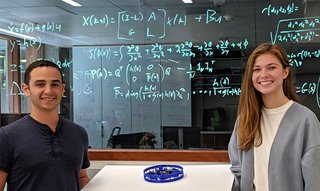 Northwestern University mechanical engineering graduate students Thomas Berrueta and Ana Pervan worked with Professor Todd Murphey to understand the control principles for supersmarticles. Photo: Ian Abraham
The researchers also noticed that if one robot stopped moving (for example, because of a dead battery) the smarticles began moving in the direction of the inactive robot. Further, the team discovered they could control movement by adding photo sensors to the robots that halt the arm flapping when struck by a strong beam of light.

“If you angle the flashlight just right, you can highlight the robot you want to be inactive, and that causes the ring to lurch toward or away from it, even though no robots are programmed to move toward the light,” Goldman said. “This allows steering of the ensemble in a very rudimentary, stochastic way.”

“Not one little robot in the system is mechanically capable of doing much by itself, but locomotion behavior emerges from the group,” Goldman said. “Function and new behaviors emerge. The sum is very different from the parts. The robots mechanically batter each other around and, with appropriate tuning, locomotion is created.”

Goldman and his team have created a functional, controllable robot built from a mass of smaller rudimentary robots. Although this system is built upon the random impacts of smaller robots that are each unpredictable, “the whole robot composed of these smarticles moves in a predictable way that we can exploit with software," Goldman said.

Making robots from smaller robots—and controlling the unique dynamics that arise from interactions within the group—could provide mechanically based control over small robots. Ultimately, such emergent group behavior could provide new locomotion and control methods for robots, even allowing them to change their shapes, modalities, and functions.

“These are very rudimentary robots whose behavior is dominated by mechanics and the laws of physics,” Goldman said. “We are not looking to put sophisticated control, sensing, and computation on them all. As robots become smaller and smaller, we’ll have to use mechanics and physics principles to control them because they won’t have the level of computation and sensing we would need for conventional control.”

Mark Crawford is a technology writer based in Madison, Wis. 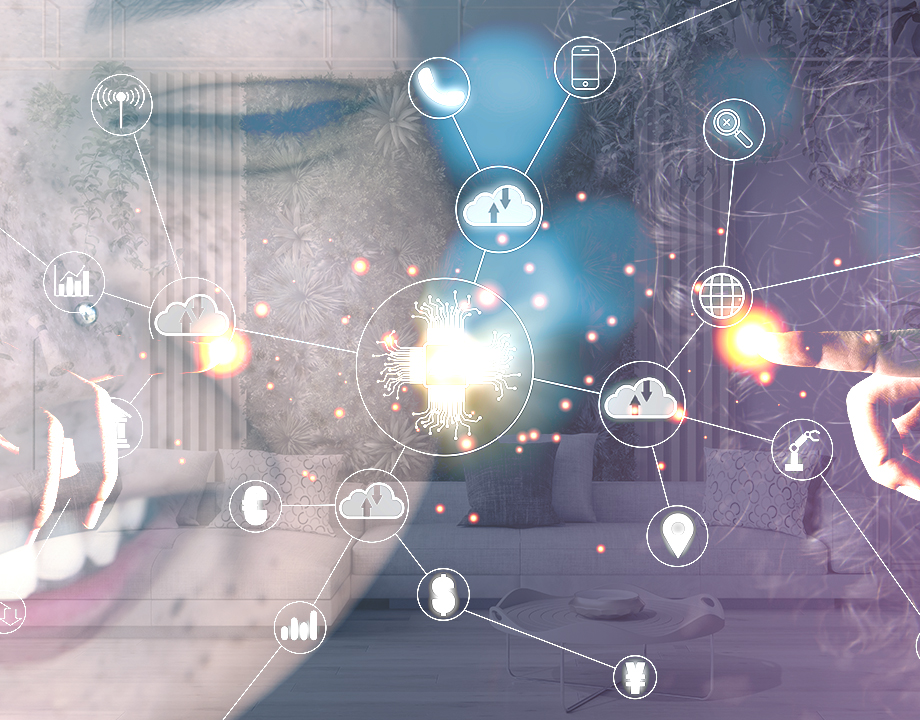