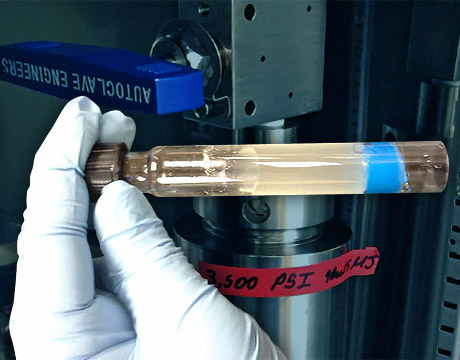 A glass vial with bacteria cells incubated in a titanium cell under high pressures and temperatures. Image: Michael Wilkins / The Ohio State University

Could hydraulic fracturing, the nontraditional oil and gas well-drilling method environmental activists love to hate, actually turn out to be greener than anyone imagined? That’s one of the intriguing findings of a major new study revealing some unexpected, and potentially useful, underground impacts of the fracturing process.

The collaborative university-industry study, led by engineers at The Ohio State University, found evidence that some of the natural gas extracted from fracked wells is an indirect byproduct of the drilling process itself.They believe the fracturing fluids injected down the well to break up underground shale formations can foster communities of bacteria and other micro-organisms that interact with fracturing chemicals to produce methane.

Although it would probably take more research to prove that this new biological source of natural gas is truly a sustainable technology, it could give energy producers new ways to prolong the economic viability of existing wells in an economic climate that discourages new drilling.

"The interactions of microorganisms and chemicals introduced into the wells create a fascinating new ecosystem,” said principal investigator Paula Mouser, assistant professor of civil, environmental and geodetic engineering at Ohio State. “Some of what we learn could make the wells more productive."

In effect, scientists said, the fracturing process is creating an entirely new ecosystem a mile below the Earth’s surface. Producers have long known about the presence of micro-organisms in wells because they accumulate and clog equipment. The introduction of antimicrobial agents to eliminate the problem apparently only takes out certain species of bacteria or archaea. Other hardier strains, however, actually learn to feed on these biocides – possibly fueling their production of methane as they adapt to a light-free, high-pressure, high-salinity environment.

In what they said was the first detailed genomic analysis of bacteria and archaea in deep fractured shales, Ohio State engineers and microbiologists partnered with colleagues at West Virginia University to study fluids from a West Virginia well operated by Northeast Natural Energy. Their mission: to create a metabolic blueprint for life living inside wells, according to OSU’s Kelly Wrighton.

For more than a year, the scientists examined the genes and enzymes found in the well fluid to survey the activity of the entire community of microbes, Wrighton said. From this data, they gained insights on microbial survival, diet, and behavior. She said it takes about 80 days after injection for the organisms to establish a food chain in which chemical-eating bacteria produce chemical byproducts that other bacteria then consume. Ultimately, the cycle culminates in the production of methane by certain species of archaea.

Future scientific steps toward practical production of bioassisted methane include identifying how the microbes enter the fracturing fluid in the first place, and developing a deeper understanding of how they migrate and adapt in conditions far more hostile than their native surface-level environment. It’s widely assumed that the micro-organisms originally inhabit the water taken from surface reservoirs for use in fracturing fluid mixtures. As this fresh water is blended with chemicals and abrasives, it is suspected that some of the microbial life might adhere to the mixing machinery, where it contacts other organisms remaining from previous uses at other locations. Their interactions, scientists suggest, may create the biological conditions for the unusual adaptive capabilities they later exhibit in their new underground habitat.

The idea of biologically assisted methane production is not new. Coalbed methane, produced and extracted in coal seams, is a significant source of natural gas. Other alternative attempts to make methane through biogenesis have ranged from the collection of gases from rice fields, landfills, municipal wastewater sludge, undersea formations, and, perhaps most vividly, from the gastrointestinal effluents of cattle and other livestock. Because naturally occurring methane is also a significant component of greenhouse gasses implicated in climate change, efforts to contain these sources are ongoing in parallel with work to exploit them.

With surging global oil supplies, sagging demand, and decade-low gasoline prices, the U.S. oil and gas industry could use some good news. The latest forecasts by the International Energy Agency show no near-term market turnaround in the offing. While they wait, producers are showing more resilience than industry observers once predicted, downsizing production levels by closing down aging wells and investing in efficiency-driven technologies like pad drilling that extract more fuel with fewer rigs.

Although the new study is only the first step on a long path to a commercial production of microbial methane in shale wells, it does suggest a potential method of sustaining a fracked well’s productivity after the natural deposit has been exhausted.

For Further Discussion
The interactions of microorganisms and chemicals introduced into the wells create a fascinating new ecosystem.Prof. Paula Mouser, Ohio State