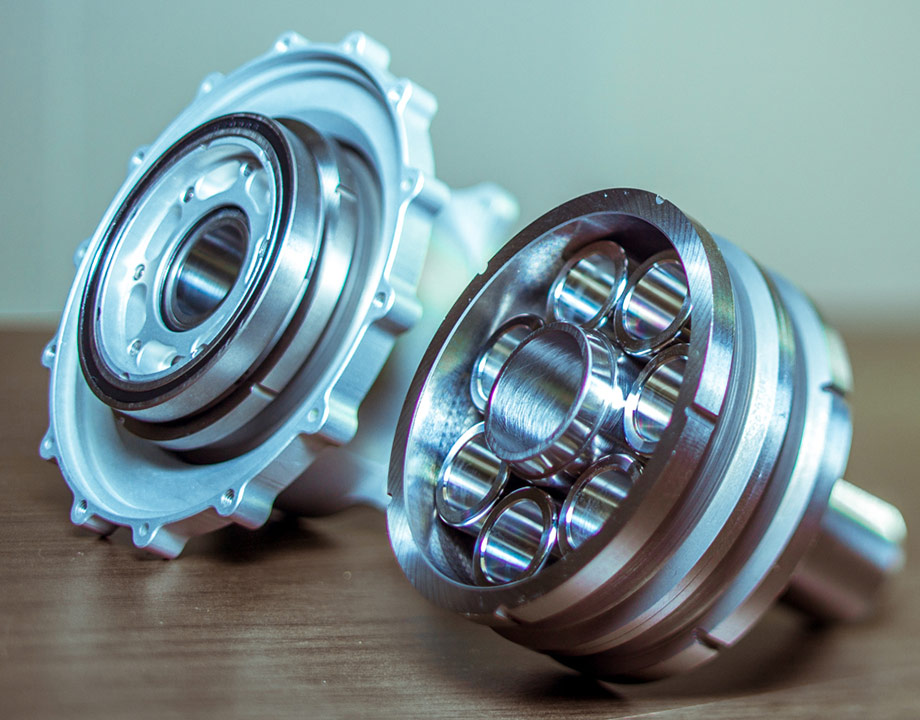 The Archimedes drive combines the architecture of a compound drive with a friction drive to achieve gear ratios of up to 10,000:1. Image: Innovative Mechatronic Systems

Engineers—especially robot developers—who want precision and power in a small package may find it in a new single-stage transmission with gear ratios of up to 10,000:1. That’s 25 times greater than other single-stage systems.

Others have built similar traction gears in the past, but the rollers need to be under a lot of compression to behave reliably. It is not easy to achieve, and the rollers may slip, according to Jack Schorsch, who developed a way to get around the problem and founded Innovative Mechatronic Systems to commercialize it.

Schorsch got interested in gears while trying to build a multifunctional arm prosthesis at Northwestern University’s Rehabilitation Institute.

“We wanted it to be lighter than a real arm and just as strong,” he said. “We came into it thinking the brain-machine interface would be the hardest part, but the mechanical systems were. We couldn’t get the torque density we needed—20 N-m—out of a drive that would fit into the knuckle. We were breaking harmonic drives that were giving us scarcely half that output.”

Schorsch never solved that problem, but he did develop a deep understanding of drives. Afterward the project, he headed to the Technical University of Delft in The Netherlands for his Ph.D.

His first project involved developing limb architecture and controls for an exoskeleton. Schorsch completed his tasks early and decided to spend the next six months searching for a better gear system.

Inspiration hit when he returned to the United States for Christmas in 2014. After he sat down and did the math, he sent his initial drawings to a 3D printing shop. As soon as he put it together, he realized, “This is a thing.” 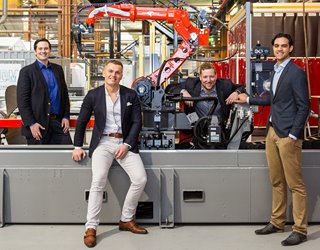 Jack Schorsch founded Innovative Mechatronic Systems after years of working on drives for robots and exoskeletons. Image: Innovative Mechatronic Systems
To appreciate what Schorsch did, consider a conventional planetary transmission. It consists of a central “sun” gear as input and several smaller “planetary” gears revolving around it. The planet gears mesh with the teeth of the sun gear on the inside of their orbits and with those a large annulus ring—think of it as an asteroid belt—on outside of their orbits.

The difference in size between the sun and annulus determines the gear reduction ratio. This arrangement generates lots of torque but achieves only limited gear reduction. So, when automobiles and machinery use planetary drives in transmissions, they often combine two or three in series to achieve the ratios they need.

This creates two gear reductions in a single step. The first occurs as the original planets orbit the sun. The second happens as the welded planets, which have different diameters, contact the outer annulus.

“Compound transmissions work great for gear reduction, but they have really poor efficiency,” Schorsch said. “Their tooth mesh is always a little bit out of alignment, and if you want better accuracy, you get poorer torque.

“We built so many of these systems on the prosthetics project, but we couldn’t get the kind of efficiency we wanted. We eventually realized that if it’s not perfect, it’s bad.”

Schorsch’s insight was to keep the compound drive but lose the teeth. The result was a compound traction drive.

Conventional traction drives use smooth rollers instead of gears. They work like a locomotive’s wheels pushing down on a rail. The rollers transmit power efficiently but have poor torque because it is difficult to control the contact forces.

“The problem with traction gears is that you have to package 100 tons on compressive force into a 10-centimeter roller,” Schorsch said. “It’s hard to get good compression numbers consistently. Engineers can get around this, but the results are complicated, expensive, and heavy.”

So Schorsch poked a hole through the rollers and turned them into springs.

“We can get 50 or 100 microns of compression, which gives us the forces we need and is doable with normal manufacturing practices,” he said.

Read More About: Two for the Price of One: Offshore Wind and Marine Power Platform

Issues remained. One was alignment. The springs were under “insanely high compression forces,” he said. Once they started to wander off track, the drives would tear themselves to pieces.

To solve the alignment problem, Schorsch and his team spent a lot of time building finite element models to understand the forces where at the contact patch where the spring met the sun and annulus gears.

This required systems-level modeling because Archimedes is more complex than the sum of its parts.

“You could take the drives apart and duplicate what you saw, but it would only work for a few hours,” he explained. “These are very complex dynamic systems. You have to understand the interplay between mechanical components and how they are manufactured.”

One persistent issue is that traction drives gears tend to creep and lose their position over time. Engineers who want precision need to couple Archimedes with a high-resolution encoder for tracking.

Schorsch plans to give engineers the opportunity to test it out. IMSystems plans to release its first developer kit to 50 to 100 potential customers by early next year. Many will go to robot makers and smaller mechatronics companies with actuation problems in instruments, machine tools, and offshore.

He is hoping Archimedes’ combination of high torque, giant gear ratios, and accuracy in a small package will open some eyes.