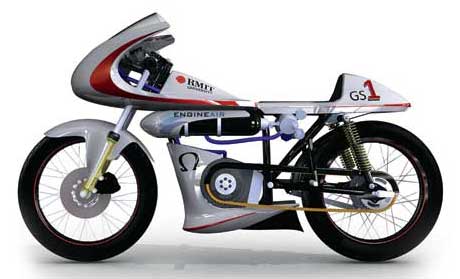 A computer-generated image of a racing motorcycle to be powered by compressed air. The single gear is fixed at a 1:1 ratio.

Any child who’s spent any time in the tub with a balloon-powered boat knows firsthand that compressed air can move stuff. Put the balloon over the tube at the stern, blow it up, let go, and watch the toy boat surge through the soap suds, leaving nothing but bubbles in its wake. Could the same principle work to move a larger toy fast enough to win a land-speed record? The professor and students of an industrial design course at Australia’s Royal Melbourne Institute of Technology University think so. Inspiration The idea first came to professor Simon Curlis while recovering from a motorcycle accident. The gasoline-powered machine Curlis had been riding was totaled and, during convalescence, he turned his mind to his next bike—one that he hoped would help him set some new land-speed record at Australia’s Speed Week, held every March on the salt flats of Lake Gairdner. But Curlis wanted to do so in the greenest way possible, so he created the industrial design course at RMIT to figure out the most environmentally friendly means to power a muscle bike. In their research, Curlis’s students soon came across an air-powered engine made by Melbourne-based engineer, Angelo Di Pietro. The engine had virtually no friction, required a single pound per square inch of puffed air to get things rolling, and was smaller than a combustion engine. “I personally think it is a genius invention,” said Edwin Conan, the student who headed the design project. They contacted Di Pietro and he agreed to let them use the next generation of his engine, provided that they keep the technology hidden under a black cover.

The body of the design was based on a Suzuki GP100 from the 1970s, owned by a friend of Curlis. It had already been streamlined for racing purposes but the class stripped it down further. “We threw out pretty much everything on the original bike, the petrol tank, the engine, gear box, et cetera,” Conan said. “Basically, we are only using the frame of the bike and the wheels and brakes.” The engine is powered by two tanks of compressed air, and with them the engine hits 3,000 rpm almost instantaneously. This obviates the need for a gearbox, so there is none. With only a single gear, the bike has only one lever on the handlebar: the brake. There’s also no headlight, brake light, or light of any other kind, though cameras have been installed to record the bike’s speed. Ideally the bike would sport lightweight compressed air tanks made of carbon fiber, but at the moment such hopes are prohibitively costly. What are the chances this student-designed bike could set a record? Pretty good, actually: There is as of yet no official compressed air-powered motorbike speed record, so any number would suffice. Conan and Curlis dream of surpassing 100 mph. Whatever the bike’s top speed, at slower speeds it could become an exhaust-free way of puffing about the neighborhood. A twist of a handle could allow more or less air in the Di Pietro motor to change the rpm. If the bike were to be truly green, the air tanks would reside on the bike and a solar powered generator would be responsible for filling them up. (A battery- or compressed air-powered vehicle is only as clean as the power source used to recharge it.) “But one has to be qualified to fill up compressed air tanks,” Conan said, “so we stuck to the ‘swapping air cylinder’ idea for the moment.” The motorbike is still a concept, however, as Conan and Curlis continue to look for funding to turn design into reality. If funders and funds are forthcoming, Curlis plans to use a better frame than the vintage Suzuki GP100 used for the class project. “That old rusty frame may not be safe to handle all the power and friction of the speed run,” Conan said. “Fair enough. He doesn’t want to have another motorcycle crash.”

[Adapted from “Running on Air,” by Michael Abrams, for Mechanical Engineering, May 2010.]

The engine is powered by two tanks of compressed air, and with them the engine hits 3,000 rpm almost instantaneously.