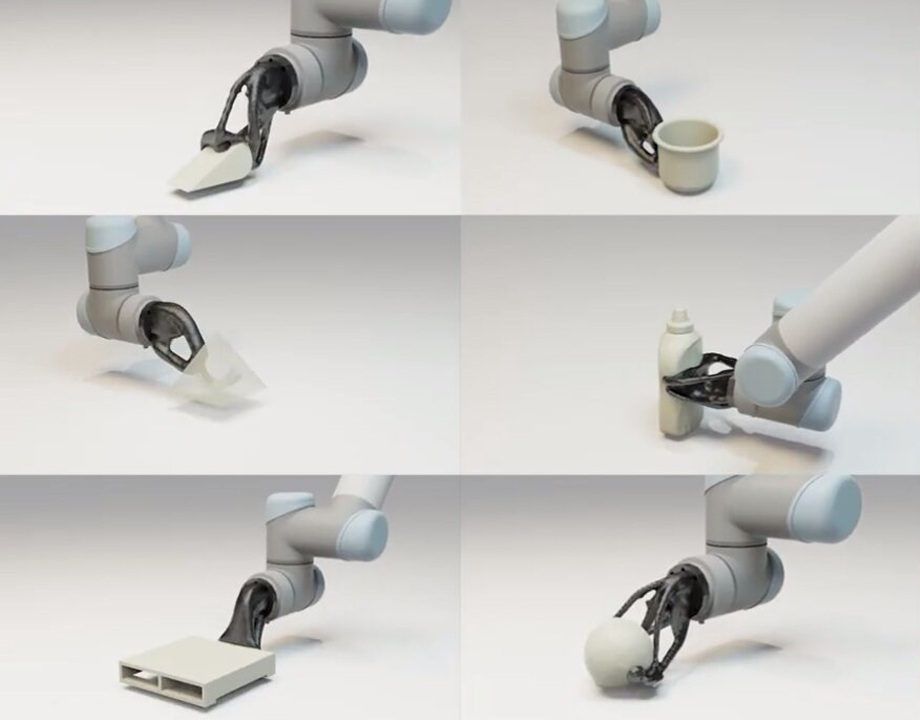 For automated assembly lines, the devil is in the details—grippers. 3D-printed ones allow manufacturers to quickly change up their robots for single-day runs of any product. Photo: Milin Kodnongbua.

Advanced Manufacturing Drafting, Modeling, and Model Validation Materials Robotics Technology and Society
The automated assembly line remains one of humankind’s greatest creations—building products a task at a time at dedicated mechanized stations is still the most efficient way we have for manufacturing just about anything on a large scale. And yet, for any object that needs to be made in a hurry, or for a shorter run, automation fails us.

Jeffrey Lipton, a professor of mechanical engineering at Northeastern University, discovered this firsthand during the pandemic. He and a team of engineers whipped up designs for face shields and masks and quickly secured FDA approval. “And then we spent all this time, effort, and energy, 3D-printing and manually assembling all these devices,” said Lipton. “We realized, hey, our best bet, even though we’ve got teams of scientists and roboticists, was to throw manual labor at it.”

The problem isn’t unique to emergency needs like masks and shields. For anything that requires a lot of fiddly bits, or is needed in small numbers, or for a short period of time – like a newly designed blouse, or a few thousand pop-up books – humans do most of the assembling on the assembly line. It’s not the difficulty of reconfiguring entire robots or even the many hours needed to program them that are the problem. No, it’s the grippers that hold up the show.

Now Lipton and his team, including Professor Adriana Schulz in the Paul G. Alan School of Computer Science at the University of Washington, have created 3D-printed bespoke grippers that will soon allow manufacturers to quickly change up their robots for single-day runs of any product. 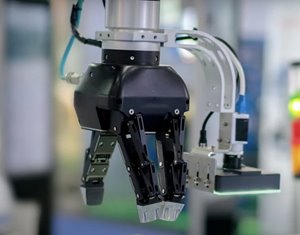 Making a dedicated gripper that was designed for a single object at a time, Lipton and Schulz realized, would allow the path and the programming to become simpler. And 3D-printing meant those grippers could be made overnight.

To create a system that could speedily produce a dedicated gripper, the researchers created three goals for themselves. “The grippers needed to handle objects stably; they needed to insert without collision; and they needed to be strong enough to handle the weight of the object,” said Milin Kodnongbua, a Ph.D. student under Adriana Schulz, who worked on the project. To do all those things – and quickly – the system they devised randomly picks three points around a target object and then selects which of those would be best at supporting it. Then both the design and trajectory are varied to avoid collision. Finally, topology optimization is used to maximize the strength to weight ratio.

Programmed to fit around any protrusions, or into any crevice an object might have, the grippers produced by this system don’t look like the pinchers and digits of robots as we’ve known them. They’re more organic, more like a wad of silly putty that’s been contoured by a four-year-old than a highly engineered multi-jointed vice.

In fact, it can be difficult – from the human perspective – to know how the gripper will fit into the object. “Especially as the shapes get very complex and hard to pick up, the interface between them isn't always guaranteed to be super intuitive,” said Lipton. “If you’re just handed the object and the tool, it’s not clear, necessarily, that those two go together. Once you figure out the pattern, it just snaps in perfectly.”

Though the forms the grippers take may confuse flesh and blood creatures, humans are still needed for the ultimate selection. The gripper algorithm spits out several CAD options, and it’s up to the designer, or manufacturer, to pick the best one.

There are, however, objects for which there is no option, let alone a best one. Straight cylinders and boxes, with no other geometric features, don’t give a gripper anything to latch on to or in to. But engineers and manufacturers using the system could include small cutouts or protrusions in their objects' designs to give these generatively made grippers a handhold.

At the moment, the weight of the objects that can be lifted is limited by the plastics used at the 3D-printing end of the process. But there’s no reason the system couldn’t be used in heavier manufacturing situations with metal 3D-printing or even by adding metal reinforcements.

“Our ultimate goal is to be able to make an automated factory that can change over what it’s making on a daily basis,” said Lipton. “And right now, the limiting factor on that turnover is how long it will take you to 3D-print the grippers, prep them, and install them on the system.”