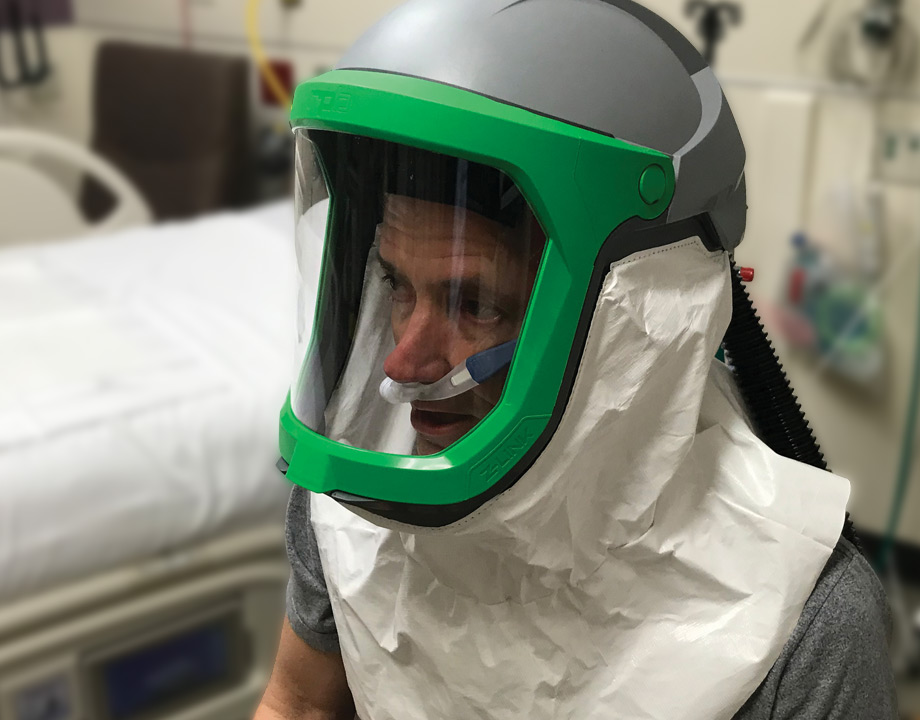 A simple helmet fitted with a vacuum hose and motor filters the breath of infectious disease patients and keeps healthcare workers safe. Image: The University of Michigan

Not every severe Covid-19 patient needs a ventilator. But no other method of getting oxygen to their lungs require intubation—the insertion of a tube down a patient’s throat. The procedure, though simple, produces an aerosol that can infect medical staff and contaminate the room they’re in.

Researchers at the University of Michigan have found a solution to this problem. In essence, it’s a helmet with a hose. Cheap and easy to produce, its developer now has found a manufacturing partner, DEKA Research & Development Corp., for commercialization.

At the beginning of March, Sridhar Kota, a professor of mechanical engineering at The University of Michigan, received an email from Michigan Medical asking for engineers to develop a new containment system for fighting coronavirus. They hoped to reduce the demand for ventilators, lower the risk for medical staff interacting with infected patients, and free up negative pressure rooms (which keep contaminated air from escaping) in hospitals.

That same day Kota discussed the subject with a medical student—his daughter. While explaining to him the use and cost of negative pressure rooms, she happened to look at a greeting card she had just purchased. It featured an astronaut and had a jokey caption about how you have to dress right for the job. The astronaut’s helmet could do the same job as a negative pressure room, she realized. It even came with a hose, which could be hooked up to a vacuum system. Place it over a patient and it would create a negative pressure room around his or her mouth and nose.

“I said, ‘Gosh, it’s such an obvious solution, such a simple idea—maybe I’m not understanding completely what the problem is,” said Kota. 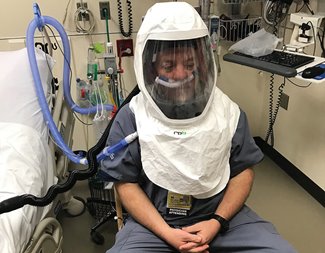 Professor Sridhar Kota’s idea has been picked up for commercialization by DEKA Research & Development Corp. The University of Michigan
His skepticism didn’t keep him from trying. He immediately ordered a helmet for overnight delivery and bought a vacuum hose and a motor as well. Soon he had rigged up the system as he and his daughter imagined it, with the motor sucking air out of the helmet and through a HEPA filter.

He took it straight to the emergency room.

Editor's Pick: A Ventilator for Everyone

There, six physicians tried it on. “They were like, ‘My God! This is a game-changer—we can turn every bed into an ICU unit, we can transport patients that need various procedures, we can treat patients in the hallways,’” said Kota. He was soon granted approval to use his device on patients, and they too, were enthusiastic. “The nurses were literately in tears, avoiding the complications and risks of intubation.”

Kota ran a fog test to see how just how effective the helmet was. With the helmet on, not a single particle from the patient escaped the helmet and into the room. The effectiveness of such a device would have applications long after coronavirus. Infectious patients of any kind arriving at an emergency room, for instance, could be outfitted with the helmet so they wouldn’t infect those around them.

The front of the helmet has a little door that allows a patient, or nurse, to attach an oxygen-providing tube to the nose. That oxygen is heated, but the helmet does not get overly hot, as it sucks in air from the room as well.

Kota has since found that his negative pressure helmet could easily be manufactured by reversing the flow of helmeted respirators made for people working in dusty environments. But the simplicity of the task has not meant the sudden production of thousands of Kota’s helmets.

At the moment, it takes eight to 12 hours to assemble a helmet, and Kota was frustrated about finding someone to commercialize it, until recently. DEKA, founded by Dean Kamen, is now partnering with Kota to commercialize the negative pressure helmet. They already designed and prototyped a low-cost lightweight version of the helmet and will soon pursue FDA approval for EUA (Emergency Use Authorization), he said.

“This is such a simple idea, such an obvious solution. And it is shockingly effective. We just have to make them in quantity,” said Kota. “My only goal is to put as many of these units in the hands of caregivers as quickly as humanly possible.”

Michael Abrams is an independent writer based in Westfield, N.J.