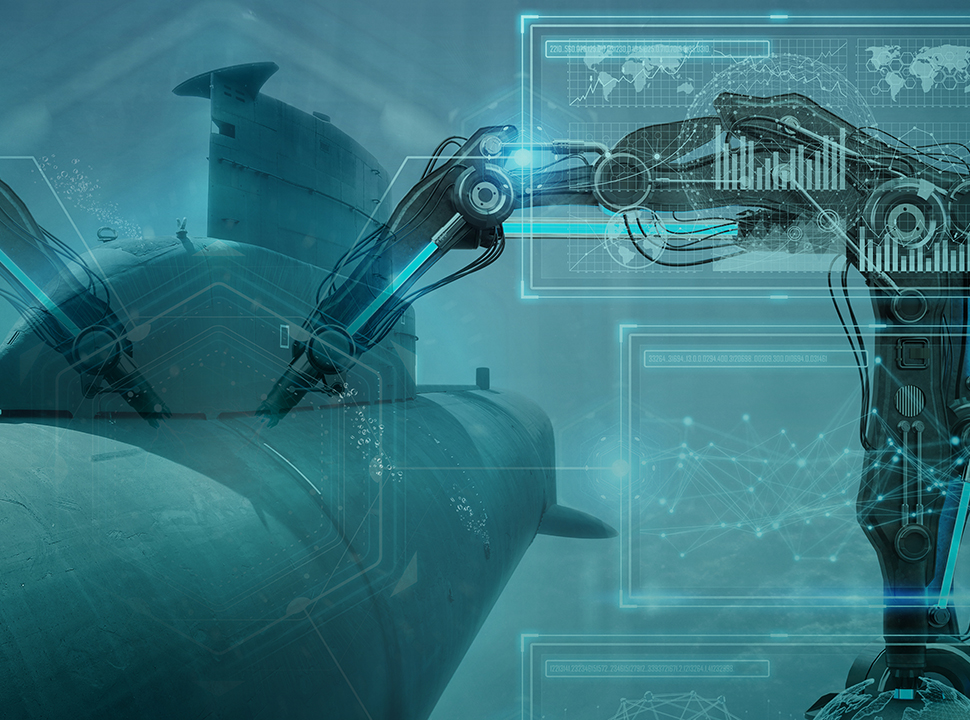 The U.S. Navy is currently working to Increase the diversity of its workforce. Robots are part of that plan.

Over the next few years, robots will be taking over more of the dirty, dangerous and repetitive jobs performed by Navy workers and private contractors. At the same time, the USN will be looking to recruit and train more humans to run, maintain, program and work alongside this robotic fleet.

“We don’t see a rush of people coming to work in our depots,” said Paul Huang, a program officer in the Navy Manufacturing Technology (ManTech) Program located at the Office of Navy Research (ONR). “The question is how do we supplement the current and future workforce. In some of the reports I’ve seen, there are three million potential jobs that can’t be filled in manufacturing.” 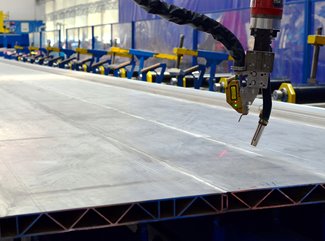 Robotic welding will reduce time, increase yield.
The Navy’s moves foreshadow and reflect many trends in different areas of manufacturing as private companies begin or plan to adopt robotic systems to improve productivity and augment labor shortages.  These new systems will also be easier to program, able to handle multiple tasks and agile enough to operate within restrictive work environments.

A recent report from the Advanced Robotics for Manufacturing Institute (ARM) and Deloitte found that 4.6 million manufacturing jobs in the U.S. will need to be filled over the next 10 years. Many of those jobs will involve working in some way with robots. The new roles, among others, include robotic operators, technicians, specialists and integrators to manage, support, maintain and operate the robots, their task loads and work processes. About half those jobs, which involve different levels of skills and expertise, could be left unfilled due to lack of training, the report notes. But different entities, like the Navy and private businesses, recognize the urgency needed to recruit and train the people to fill these new roles.

More for You: How Can Robots Improve the Building Labor Shortage?

To address the issue, the Joint Summit: Robotics in Sustainment (JROBOT), held last March, addressed new robotic systems and Navy readiness. This year’s summit continues to address similar issues. The idea is not to eliminate jobs but to broaden the career paths and create new jobs by training workers.

At last year’s summit, JROBOT partner organizers ONR and ARM, a Department of Defense consortium made up of government, industry and universities to advance robotic technologies in U.S. manufacturing, made some important decisions to address the issues, such as assigning specific jobs to robots. The most pressing of those will focus on sustaining the Navy’s fleet and other assets. Those include sand blasting worn paint coatings and applying new ones; removing corrosion on ships, submarines, aircraft and other vehicles, and inspecting fuel and ballast tanks.

Through the ManTech program, the Navy helps vendors identify new technologies and hardware and software systems, qualifies and certifies them, and then shares the information with the equipment vendors for implementation. ManTech works with manufacturing innovation institutes like ARM to understand the baselines and implement the technologies into its production environment, Huang said. 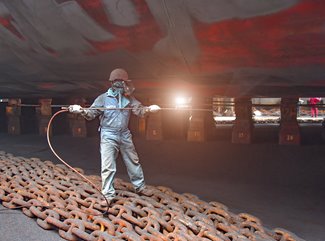 Tasks such as sandblasting could be accomplished using robots.
The Navy is currently exploring the different technologies and equipment to best handle those jobs. Only about five to 10 percent of the Navy’s manufacturing work is executed by robotics, which mostly involves welding, Huang said. Robotic welding is one job the Navy is quickly ramping up. Most of the welding, which involves joining steel plates that can measure between 40 feet to 100 feet, is mainly done through a mechanized gantry system and manual labor with hardly any robotics involved. Robotic welding systems can speed up the process between 50 percent to 70 percent, which translates to about 44 more pounds of weld deposited during an eight-hour shift. New systems coming on the market perform even better, Huang said.

Some shipbuilders currently use robotic laser arc welding, but many of those systems are difficult to program and are only used for very specific welding jobs. “They are hard to reuse for other applications,” Huang said. “We don’t want a single-use robot. We want an agile robot.”

ManTech is exploring new robotic systems that are easier to program for multiple tasks.  It wants one robot to scan a surface, blast it clean and then paint it by quickly replacing the end effector (a hand-like device) at the end of the robotic arm. “So, using one robot for three tasks,” he said.

Huang is also seeking a more agile robotic system for the Navy’s in-house work. The robot needs multiple flex and rotation points to adapt to and navigate restrictive workshop footprints that would be too expensive to reconfigure.

The next area of robotics the Navy will explore are “crawlers,” which can inspect small spaces that are difficult to access. It is also looking at large robotic systems to automate the assembly process of big infrastructures. This would supplement the use of expensive cranes, which are a critical but limited resource in shipyards.

“You don’t always have access to a crane when you need it,” he said. “So a robotic system, especially if they’re mobile, can alleviate the workload and helps us maintain or even compress a schedule.”