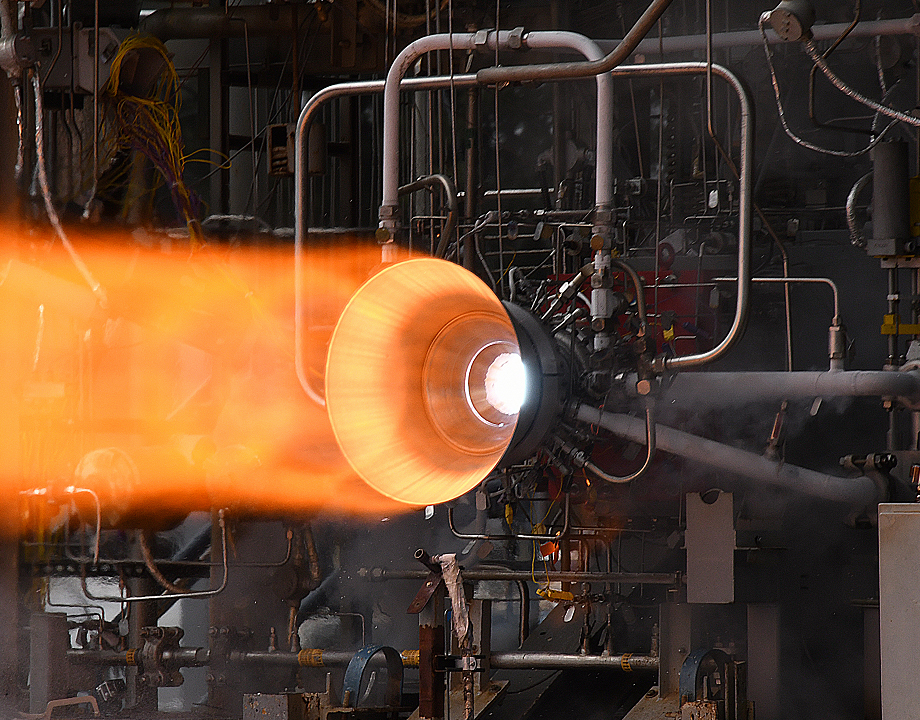 A new metal 3D printing technique survives rigorous testing and promises to decrease the cost of engine components by up to 50 percent. Photo: NASA

One small step for NASA, one big leap for metal additive manufacturing.

That’s the upshot of a metal 3D-printing technique NASA’s Robotic Deposition Technology team and Aerojet Rocketdyne, a commercial liquid rocket engine builder, recently incorporated that could help to decrease the cost of engine components and lead times by up to 50 percent.

For the first time, NASA incorporated and successfully tested a technique called cold spray deposition (CSD) on one of its engine components. In this case, CSD was used to add a protective jacket of NASA’S HR-1 material—a nickel-based alloy that resists corrosion, oxidation, and embrittlement in extreme environments—to the exterior of a combustion chamber for the 7,999-pound class of lander engine that Aerojet Rocketdyne is building in partnership with the agency.

By passing the rigorous hot fire test, which simulates the extreme environment of a working rocket engine, NASA essentially approved the use of CSD in manufacturing engine components. That approval allows builders of critical components to confidently add CSD to their metal AM toolboxes.

“That’s why it’s such an impressive leap,” Alan Fung, program manager at Aerojet Rocketdyne, said of the multiple milestones achieved during the project.


Passing the test also allows NASA to assign the component a technology readiness level (TRL) of 6, meaning that it is a fully functioning prototype or representational model. TLR is a measurement system used to assess a technology or product’s maturity level.

“It takes a while to get there,” said Paul Gradl, a senior propulsion engineer at NASA’s MSFC in Huntsville and an expert in AM, adding that the next step is to introduce the component to industry for actual flight, which would increase the TRL to 7. “There's a lot of learning, a lot of material, property development, a lot of understanding of the design for the process.”

Watch Video: The Journey of Additive Manufacturing and Artificial Intelligence 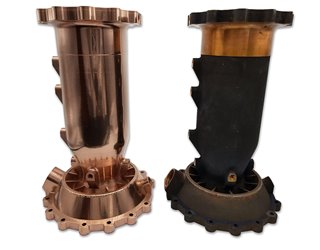 The chamber itself, printed from a copper alloy, has excellent heat transfer properties but needed to be structurally reinforced. Photo: NASA
The combined news is important for several reasons, principals on the project said. NASA, for example, used a laser powder-bed fusion printer to build the combustion chamber. That technique is well-suited for the chamber because it’s able to print  the intricate channels to run cooling fluid through and the thin walls needed to keep the weight down. The process is slow and precise.

The chamber itself, printed from a copper alloy, has excellent heat transfer properties but needed to be structurally reinforced. That’s where CSD comes in. The technique uses a supersonic gas jet to shoot solid powders onto a surface. Upon impact, the particles deform and adhere to the surface. The jacket provides structural reinforcement without adding much weight. The technique also uses kinetic energy instead of heat to apply the jacket, which helps to reduce or eliminate material shrinkage.


No technique is adept enough to print a variety of materials. The ability to add a new AM technique to the process also increases the amount of feedstock builders can choose from, another important aspect of this project, Fung said. HR-1 seems to be the perfect material for this type of application.

Take Our Quiz: Which New Materials are Popular in 3D Printing?

Tom Teasely, a propulsion engineer with the RDT team, based out of NASA’s Marshall Space Flight Center in Huntsville, Ala., designed the hot fire test for the chamber. During a total of 365 seconds of testing, the chamber was exposed to temperatures close to 6,200 °F (about 62 percent the surface of the sun, which averages about 9,941 °F) and pressures up to 750 pounds per square inch. 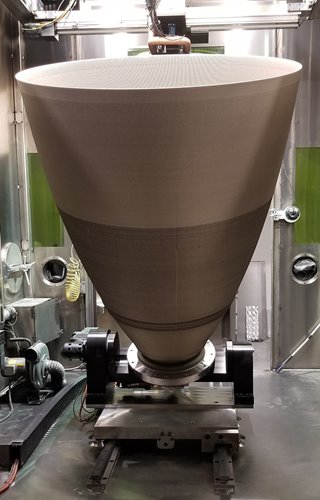 Passing the test also allows NASA to assign the component a technology readiness level of 6, meaning that it is a fully functioning prototype or representational model. Photo: NASA
New hardware, regardless of the manufacturing technique, typically undergoes some type of alteration under such extreme testing conditions. There were no alterations or breaches to the HR-1 applied using CSD. “That was really quite amazing,” said Teasley, an additive native who has been working on AM at NASA for the last three years.

The AM community can expect NASA to regularly announce more breakthroughs throughout the next year. The RDT team will continue to explore the design and manufacturing of innovative combustion chambers, nozzles and injectors using techniques such as CSD, laser wire direct closeout, LPDF and laser powder directed energy deposition, all to create more cost-effective and efficient rocket engines. Continuous advancements in metal AM have made that increased production possible.

Paul Gradl remembers when NASA conducted only a handful of hot fire tests during a 10-year period. Now the agency is conducting up to 15 a year, thanks to the amount of parts that can be quickly produced using AM, different printing techniques, and a growing variety of feedstock.

“The point with that is that you can significantly reduce the time that you can get to a first demonstrator unit and your early hardware,” he said. “I think that’s one of the reasons, with additive manufacturing, why you're seeing this insurgence of commercial space companies coming to the market. A lot of them are using additive manufacturing; they can reduce that development time. They can print something and develop their launch system fairly quickly. It's a really exciting time.”