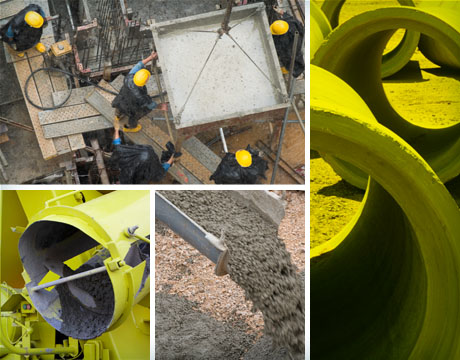 "It is challenging for concrete prefabricators to produce made-to-order concrete products that can be delivered to a site as needed," says Min Liu, assistant professor at the department of civil, construction, and environmental engineering at North Carolina State University. "Concrete prefabricators need to work collaboratively with designers and installers on details such as dimensions, material, and strength requirements."

The precast industry is under constant pressure from clients to design fabrication lines efficiently, control (ideally reduce) material and labor costs, and provide just-in-time delivery to minimize storage and handling costs—especially in a weak economy. This makes it even harder for concrete prefabricators to make and execute reliable work plans.

Two of the biggest challenges for meeting deadlines are variations in starting time and taking longer than expected to complete production tasks.

"Variations not only cause productivity loss and delay the task itself, but more importantly they will have a ripple effect—causing productivity loss of the downstream crews and process delay of the entire project, which can be many times bigger than the direct effect and significantly affect overall project performance," she says.

To reduce these variations, Liu carried out a study with three main objectives:

This study was published in the June 2012 issue of Journal of Construction Engineering and Management.

Detailed production data from a local precast construction facility was collected, including site layout and actual and planned task starting times and durations. Twenty-one sets of data were obtained for each of the following tasks: cutting and removing slabs, cleaning the bed, pulling and stressing strands, and placing concrete. STROBOSCOPE simulation models were used to determine penalties associated with not reducing variation, which included an increase in project duration, work in progress (WIP), and cost and a decrease in labor productivity. Furthermore, the effects of two different execution policies in the face of variation—keeping laborers waiting until the preconditions are ready and keeping laborers busy—were compared.

The main cause of starting time variation and task duration variation proved to be equipment breakdown.

"In construction there are multiple conditions that need to be met for a task to be executed smoothly," says Liu. "These include material, design information/working method, equipment and tools, space, labor, and weather. In this case study, equipment was the most important variable."

Although the company was aware of the negative impacts of equipment failures, it did not make changes because having a full set of spare parts was considered to be too expensive. Liu is confident that, after seeing the quantified consequence of its decision to do nothing, the company will realize the real cost of inaction and adopt a different strategy.

"The strategy could be having a good equipment maintenance program, sharing back-up equipment sources with other companies, or having a reliable planning program in place, such as the Last Planner System of Lean Construction, to make sure preconditions are truly ready when it's time to start a task," she adds.

Results from the STROBOSCOPE simulation models showed that keeping laborers busy can not reduce variation and may actually contribute to more variation caused by a WIP increase. "This goes against the traditional management assumption that keeping workers and equipment busy would result in optimum production performance, as discussed by Ballard et al. (2003)," says Liu.

These findings imply that plant managers can improve productivity and project performance by reducing variation. The simulation models should also help concrete prefabricators understand that keeping laborers busy is insufficient for managing variation and greater effort should be made to reduce variation through better work plans. This could include lean construction, alternative assignments (a workable backlog) for the crews on-site, and alternative uses of labor time for training and providing feedback.

"Management effort should be devoted to eliminating causes of variation in the planning stage," concludes Liu. "Although this study is based on a concrete-slab production facility, this research can have a broader effect on the construction industry because the research method and simulation models are applicable to other fabrication processes as well."