Energy Fuels and Combustion Technologies Technology and Society Transportation and Aerospace Manufacturing
For almost 10 years, I drove a hybrid. I purchased the 2010 Ford Fusion Hybrid, and it was a great car. It had interactive features like an LCD screen that showed green leaves the eco-friendlier you drove, and it became a game of how long I could go in battery mode only or maximize the hybrid mode. I was able to achieve a fuel efficiency of 40 miles per gallon and a 600-mile range.

Ever since I lost that car in an accident, I’ve dreamt of the day that I could invest in a full-electric vehicle. However, whenever I mention it, I always get plagued with the same questions: Where will you charge it, will you be able to drive far with an EV, and is buying an electric car that much more environmentally friendly?


A common thought is that power plant emissions will rise due to heavier demands on the grid for electric vehicles. The reality is that power plant emissions will vary depending on how your local power is generated. EVs have no tailpipe emissions, so their overall carbon footprint is lower than gas-powered vehicles. Research by the EPA and the U.S. Department of Energy (DOE) show that EVs are typically responsible for lower levels of greenhouse gases (GHGs). According to the U.S. Department of Transportation, vehicles were the largest GHG contributor at 29 percent in 2019, with an estimated 267 million vehicles on the road. Converting these vehicles to electric will significantly drive down the number of emissions produced.

Recommended for You: 7 Ways Electric Vehicle Technology is Changing the World

If your local power is derived from wind or solar power, greenhouse emissions for that particular area will be considerably lower. Electricity generation is the second-largest emissions contributor at 25 percent. The EPA and DOE’s Beyond Tailpipe Emissions Calculator can estimate the gas emissions where you live depending on whether you buy an EV or hybrid vehicle and compare numbers with those associated with gas cars. For example, a fully electric car like the Audi e-tron in San Diego—a leading city in solar power generation—would generate 110 CO2g per mile versus 410 CO2g per mile of a gas car.


Myth #2: A Lack of Charging Infrastructure


Charging infrastructure is one of the most considerable obstacles to EV adoption. Many cities have not yet implemented charging stations, causing hesitation to buy an electric car. A new study published in the journal Nature Energy by the University of California Davis showed that one in five plug-in electric vehicle owners switched back to gas cars due to charging difficulties. According to the study, 70 percent of them lacked access to Level 2 charging at home. 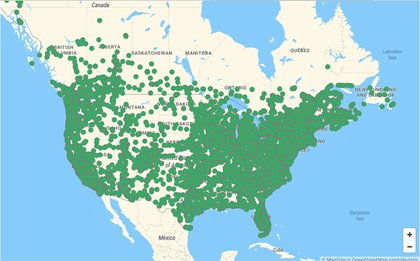 Level 2 and dc fast-charging stations across the United States. Image: U.S. Department of Energy
While this myth has some truth to it, it is still not the whole picture. The National Renewable Energy Laboratory has been tracking the trends on alternative fueling stations since the 1990s. Their “Electric Vehicle Charging Infrastructure Trends from the Alternative Fueling Station Locator” report is released quarterly and tracks the trends of how many charging stations are available across the country. At the end of the first quarter in 2020, 79,465 public electric vehicle supply equipment, charging stations or docks, were available. By the end of 2020, that number rose to 96,190, an almost 21 percent increase in a single year. The new infrastructure plan from President Biden, The American Jobs Plan, allocates $174 billion on EV development that includes incentives for automakers, subsidies for drivers, and the scaling up of the number of public EV charging stations.


On average, the typical household drives 50 miles per day, and most drive under 100 miles per day, according to the EPA. Most EVs will be able to manage daily driving duties, but it will vary from vehicle to vehicle, its operating conditions, and the surrounding environment. Out of the top EVs on the market today, most have a range of 250 miles or more. According to Edmunds, the top vehicle, a Tesla Model 3 Long Range, has a range of 353 miles per full charge. Other models like the new Ford Mustang Mach-E and the Hyundai Kona Electric have ranges of 344 and 315 miles, respectively. This is a significant jump from previous models, even just one year ago. Car and Driver magazine’s EV range test of 2020 estimated an average of 200 miles among the top vehicles on the market.

You May Also Like: New Charging Technologies for Electric Vehicles


Myth #4: Battery Manufacturing is Worse for the Environment


A former colleague of mine always argued that the battery creation of an EV impacted the environment more negatively than the lifespan emissions of a gas car. According to the EPA, some studies have shown that manufacturing an EV—mainly the battery—creates more carbon pollution than manufacturing a gas car. However, over the lifetime of both vehicles, an EV will produce fewer GHGs than a gas car.

Researchers at the Argonne National Laboratory have created The Greenhouse Gases, Regulated Emissions, and Energy use in Technologies (GREET) model to simulate different vehicles’ energy use, emissions output, and fuel combinations. The model considers the total impact of fuel creation, from drilling, refinement, and sale, as well as the manufacturing of a vehicle, from the sourcing of different materials, the creation of the battery, the assembly of the chassis, and even how recycling can impact the creation cycle of future cars. The consensus is that while the creation of an EV might be more impactful at the beginning of a car’s lifecycle, the overall GHGs will be less than a gas car due to the lack of tailpipe emissions. 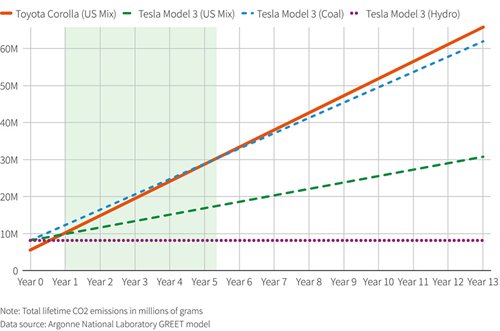 An average electric car takes one year to reach “carbon parity” or break environmentally even with a gasoline vehicle. Image: Reuters
Reuters used the GREET model to calculate different environmental break-even points of a Tesla Model 3 against a Toyota Corolla. With an EV battery range of 300 miles and a size of 54 kilowatt-hours, the Tesla Model 3 became the more environmentally friendlier option at 13,500 miles. However, this assumes a mix of energy sources, including 23 percent coal-fired energy generation, other fossil fuels, and renewables. The same analysis completed on solely coal-fired energy determined the Tesla Model 3 would become the cleaner option at 78,700 miles.

The hope is that as we rely more on renewables in the future, EVs can lower their carbon footprint even more. The third scenario analyzed assumed energy produced solely by hydroelectric power, where the Tesla Model 3 broke environmentally even at a mere 8,400 miles.

Electric cars are the future, and it is only a matter of time. Depending on how society ramps up the adoption of these new technologies, the timeline can be short or long.