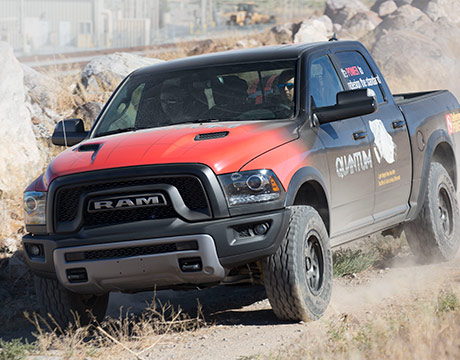 Some inventions simply sound too good to be true. American Axle & Manufacturing’s Quantum drivetrain might be one of them.

It is at least 30 percent lighter than a typical pickup or SUV axle, light enough to shave 100 pounds off a heavy-duty pickup. It is also 30 percent more efficient—and it costs about as much to make as a conventional axle.

Quantum’s story shows how new thinking can reinvigorate even the most staid mechanical products. And also how hard it can be to sell a true innovation to a conservative industry. Top Story: Air Taxi Aces Test Flight That story began six years ago, soon after AAM’s lab had launched EcoTrac, an all-wheel drive system that turns on automatically during challenging driving conditions. All of the company’s electronics experts were focused on adapting the technology for their first commercial customer, so Jim Downs, AAM’s director of innovation, decided to focus on a strictly mechanical system.

“It was clear that EcoTrac was going to have a major impact,” Downs said. “It’s now a billion-dollar product. We were riding high and decided that whatever we worked on, it would have to have a really significant impact on the company.”

They decided to focus on beam axles, which are typically used in light and medium-duty pickup trucks, SUVs, and vans.

The team’s goal, which Downs calls a “delusion of grandeur,” was to build an axle that was dramatically lighter, more efficient, and about the same price as existing axles. With gasoline well above $3.60 a gallon, it seemed like a can’t-miss proposition because every pound shaved off the weight of a vehicle improves fuel economy.

Axles were a good target, since they had changed little over 100 years. They were also the only major automotive component that still relied on shims—small metal spacers—for a perfect fit.

“In the 1970s, every vehicle system of any level of complexity required shims for adjustments,” Downs explained. “This included the engine and powertrain and even the body. I own a 1972 Cadillac, and everything fit together beautifully—but not because the part was a perfect fit. When I rebuilt it, I wound up with a 5-gallon bucket of shims.” Related: Manufacturing Takes Flight Since then, companies have improved manufacturing consistency and redesigned the sequence of how parts mated to each other to get the fit right the first time. The axle is the last piece of the auto that still relies on shims and threaded adjusters, which adds to production cost.

“Globally, nobody had figured it out,” Downs said.

There is a good reason for that. “A conventional axle has 12 different elements in the stack and the total spec for all of them is 30 microns. If you had to split that across 12 different elements, that’s a problem,” Downs said. “To achieve that spec, you’d have to make the individual components so insanely precise, they’re not economical. So everyone uses shims.”

Downs met with two of his top engineers and spent the next year drawing pictures. Their goal was to slash production costs enough to offset the cost of the lightweight aluminum elements they wanted to use to reduce weight.

“It was, ‘What if we mount it like this or like that,” he said. “Each time, we were trying to come up with ways to reduce the number of elements.”

This went on for almost a year. They would draw a picture, convert it to a model, and use software to analyze its performance. If they hit a flaw they could not solve right away, they would scrap the design and start anew. Each cycle took two or three weeks.

After 13 failures, they finally hit an iteration that held up. They took almost another year to design, detail, and produce their new axle. When they tested their first prototype, it worked in the forward direction but not in reverse.

“Our analytical model let us down,” Downs said. “It didn’t catch it, and we spent the next year trying to understand why the model was so wrong and what was really going on.”

The team also redesigned the axle. The new axle worked in both directions. It integrated ball bearings into the gear, which was mounted directly on the housing. This reduced the stack to only two elements, which produced a stiffer, more efficient mechanism. It also made it possible to assemble without shims.

Except it didn’t. It was not much better than existing designs. It took time, but the team eventually traced the problem to the large single nut used to clamp the stack in place. It did not apply force evenly enough, which allowed microscopic movements in the gear set that sapped efficiency from the system. Switching to a pattern of smaller bolts fixed the problem.

Downs’ choice of ball bearings was unusual, but they are slightly more efficient under light loads. They also do not require a preload to reduce noise, vibration, and ride harshness, which simplifies the construction.

“Engineering bearings was a new field for us, but absolutely required if we wanted to integrate the bearing races [the grooves in which the balls ride] into the parts,” Downs said. “We did not want to involve too many outside suppliers, or the whole world would know how to do this when done.”

AAM invested in equipment to grind, hone, and measure bearings. They learned to measure what their machinery was doing. Most importantly, they developed proprietary methods to adjust the wheels to grind races into the large axel components.

The reduction in part count and assembly complexity saved costs that enabled AAM to use more aluminum.

The redesign shrank the size of the drive, reducing the amount of aluminum in the housing. This made it less expensive.

More on Inventions: Robots to the Rescue

The company also developed ways to take advantage of the lightweight metal during production and assembly. One example is the flange that connects the driveshaft with the axle. This is ordinarily bolted into place. The new method pushes an aluminum flange into a mating hard steel part that cut a spline into the softer metal, producing a low-cost, lash-free joint.

The entire assembly is much smaller than the original, which reduces mass and cost while improving stiffness, energy transfer, and efficiency.

The Quantum project exceeded even AAM’s expectations in terms of performance. Yet the auto industry has not rushed to embrace the new technology.

“Our biggest hurdle is that customers need to have a compelling need to try a new technology,” Downs said. “Gas prices have fallen and there is less pressure to boost fleet mileage.

“What we have done looks really different than what everybody does,” he added, “and the auto industry is going to need lots of evidence before it comes around.” Article
Top 5 Podcasts of 2022
Listen to the favorite podcasts of 2022, as selected by the editors of ASME. Highlights include discussion on electric vehicles and the engineering workforce.