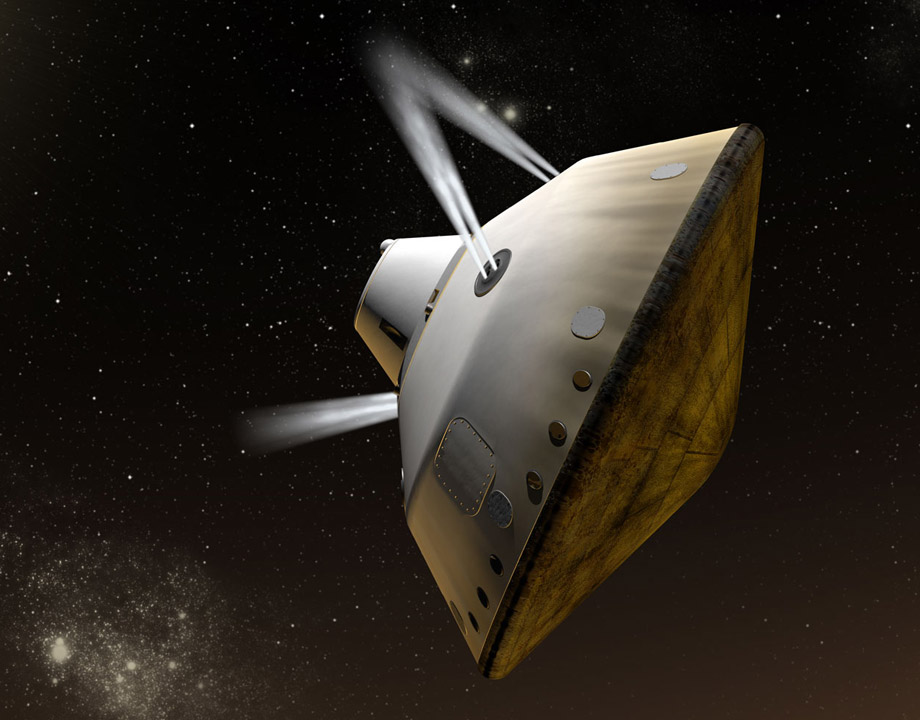 An artist's conception of a future Mars mission. The capsule has a large heat shield to help brake its entry speed to 0.5 km/s, from 6.0 km/s when it enters the atmosphere.

Starting in 1997 with Pathfinder, the United States has parachuted four robotic rovers onto the Martian surface. Yet the most successful of them, Curiosity, has traversed only 13 miles since landing in 2011.

To see more of Mars—and decipher its mysterious signs of water and methane—will take more ambitious missions with larger rovers and instruments that are too massive to parachute onto the surface. Instead, NASA will have to land rockets. At the University of Illinois, aerospace engineer Zachary Putnam is searching for ways to do that.

The problem is simpler than the solution: While Mars’ gravity is only 38 percent that of Earth, its thin atmosphere is 99 percent less dense than Earth’s. It provides much less drag to slow down a parachuted parcel.

That has not stopped Mars missions so far. NASA has packaged its landers inside capsules with heat shields. Their initial descent begins when they hit the atmosphere 125 km above the surface going 6 km/s. That is fast enough to generate drag even in the thin atmosphere.

During the terminal descent, when drag slowed them to 0.5 km/s (Mach 1.5), they deployed supersonic parachutes. Only when they are near the surface, do they fire their small retrorockets to settle softly onto the planet.

“For bigger landers, we probably won’t be able to use parachutes,” Putnam said.
“As vehicle mass goes up, the required parachute area goes up much faster. It doesn’t take long before you need a parachute that’s 300 meters in diameter. We can’t build, qualify, or operate parachutes that large. So we’re going to have to fly the terminal descent with propulsion only,” he said.

That means balancing payload and fuel. In 2015, Putnam began extensive modeling on how to dive into the atmosphere (much like existing initial descents) and then used some of that fuel to pull up and slow down before landing.

The initial descent would resemble the hypersonic fall now used with parachute systems. Most space capsules travel in a mostly straight line and have very little maneuverability (which is why NASA landed manned capsules in the ocean). Like parachute systems, the Mars capsules would rely on the drag of a large heat shield for braking.

Yet small differences in how capsules slow down and pull up down make a substantial difference in the fuel use. The key, Putnam explained, is to enter the atmosphere at a shallow angle (-10 to -15 degrees), wait until the last moment to start firing rockets, and to fire them horizontally (forward against the direction of motion) rather than downward.

Firing horizontally uses all the rocket’s thrust to slow down, rather than wasting fuel by firing downward to fight gravity.

“There’s some sweet spot in between, where you don’t have as many gravity losses, but you’re also not [stopping and] falling out of the sky,” Putnam said.

The pull-up maneuver is called a gravity turn. Once the capsule’s propulsion system starts to slow the craft, gravity has a greater vector effect than its horizontal velocity. This pulls the trajectory into a vertical descent where the thrust is pointed downward.

The maneuver needs precise timing and a significant amount of propellant—about 20 percent of mass—to succeed. Still, Putnam thinks this is doable.

Recommended for You: NASA’s Alien Tire

The next phase of his research involves using changes in lift and drag to further optimize fuel use. Initial data shows that adding some control over drag makes a big difference for capsules that do not generate much lift themselves but does little for those that do.

Putnam is also investigating the fuel cost of orbiting Mars before descending. While past rovers descended directly to the surface, larger missions, especially those with people, might want to check the weather before landing. Such missions would require more fuel and two heat shields—one for dipping into the atmosphere to decelerate into orbit and a second for landing.

The lab is also working on ways to deploy small scientific satellites that could visit the Martian moons. Many missions now have room for another hundred kilograms of payload or more.

Putnam proposes ejecting satellites into orbits that dip into Mars’ atmosphere. At the right moment, they could jettison their heat shield. The sudden reduction in drag would accelerate the satellites enough to pop them out of the atmosphere and into a deeper orbit around the planet’s moons.