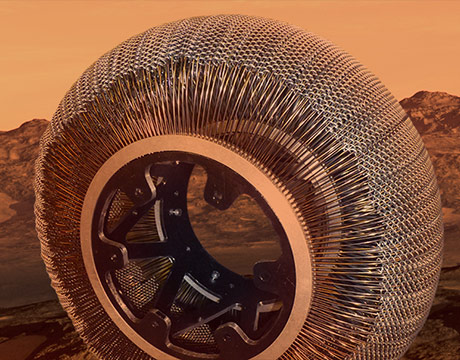 NASA is dedicated to futuristic vehicles and missions, but the agency is also setting out to reinvent the wheel. The new “superelastic tire” developed at NASA’s Glenn Research Center in Cleveland is built to thrive on inhospitable planets such as Mars, where the rocky terrain is hard to maneuver and temperatures can reach -130 °C.

But the real advantage of the new tire is its ability to carry heavy loads without suffering permanent damage. For lunar and planetary rovers that are intended to explore for months or years with no hope of getting spare parts, that is a real benefit.

Tire damage became a concern for NASA engineers in 2013 after they noticed significant wheel degradation on Curiosity, the car-sized rover that explored Gale Crater on Mars. “We wanted to ensure any wheels sent to Mars never got damaged again,” says Santo Padula, a materials research engineer at Glenn.

A team led by Colin Creager, a mechanical engineer at NASA, had been developing tire prototypes based on a steel spring design. These springs could carry heavy loads but faced limits on the force and deformation they could handle. Too much, and the wheels would fracture due to excessive stretching of bonds between atomic structures.

Also for You: Need to 3D print something on Mars? Here’s what you need to know.

Instead of steel, Padula recommended fashioning a wheel from a nickeltitanium shape-memory alloy, which had a unique deformation mechanism that could snap a tire back into its original shape in case of deformities. The alloy is able to reshape itself due to a unique deformation method. Rather than expanding the bonds of a crystal lattice, it rearranges the atomic structure to another crystal lattice form. That means that if the solid element needs to bend or deform when hurdling over an obstacle like a rock, it would come back to its original shape instead of separating or fracturing.

After several years of trials, the team believes it has hit on the right formula for the alloy. The nickel-titanium alloy can take a 10 percent to 12 percent strain, while the earlier materials had only a 0.3 percent strain. The engineers have tested the new tires with a load of 140 pounds—up to hundreds of times the weight of the tires—and believe they could support even more.

Though the tires were designed with space it mind, the NASA engineers have perhaps a loftier goal in sight. “We want to see this used on earth,” Creager says.

Shape-memory alloy tires may someday be used in automobiles, heavy equipment, and military vehicles. The airless design could give vehicles better traction on sand and dirt, and might ultimately reduce the amount of rubber used in tires. Read more about new advances in manufacturing and design on ASME.org