Building Equipment Contractors Chemical and Pharmaceutical Manufacturing Medical Equipment and Device Manufacturing Robotics
After 10 years in development, a tiny device—including a sensor chip smaller than a ladybug to be worn in a patch on the body—holds promise as an early warning alert to a malfunction in the wearer’s body before it would otherwise have become apparent. The alert would be sent not only to the wearer but also transmitted wirelessly to medical professionals.

The health monitor, an accelerometer contact microphone, measures bodily motions and sounds and creates a readable electronic output, called a seismogram (a seismocardiogram if monitoring the cardiopulmonary system).

The 2-mm x 2-mm sensor chip serves as an advanced electronic stethoscope and accelerometer in one, detecting vibrations from inside the body and eliminating distracting noise from outside the body.

A team of researchers at Georgia Institute of Technology described the device and human testing of mechano-acoustic signals from the heart and lungs in the journal npj Digital Medicine earlier this year.

“When we look at our cardiopulmonary system, they are basically mechanical devices and they generate a lot of vibration and mechanical signals. We are interested in quantifying the signature signals coming from these devices in the acoustic and mechanical domains,” said research team leader Farrokh Ayazi, an engineering professor at Georgia Tech. “That’s what these transistors are able to do in multidimensions.”


Ayazi, an expert in the field of micro-electromechanical systems or MEMS, said the chip’s main engineering principle is simple, two finely manufactured layers of silicon, which overlay each other separated by a space of 270 nm—about 0.000001 of an inch. The electronic output comes about when part of the chip is put into very slight motion from the vibrations of the body’s motions and sounds, signals often not detected by today’s technology. 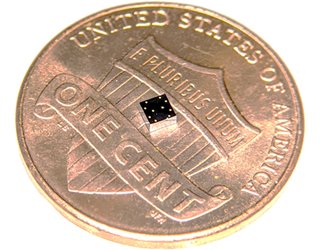 The sensor is a tiny physical chip remarkably attuned to inertia. Photo: Georgia Institute of Technology
Conventional application of such devices that are much larger have been used in the automotive industry for measuring the motion of a vehicle or deployment of an airbag when there is an accident.

“Over the years, we have developed process technologies to miniaturize these otherwise large and bulky devices into small chips using micro machining techniques. These are machining small devices into a piece of silicon,” Ayazi said.

You May Also Like: Bionic Patch Succeeds When Hearts Fail

According to Georgia Tech, medical researchers have tried to make better use of the body’s mechanical signals for decades but recordings have been inconsistent or relied upon clinician skills that can be influenced by human error.

The medical field uses EKGs (electrocardiograms) for information on the heart, but EKGs measure only electrical impulses. “The heart is a mechanical system with muscles pumping and valves opening and shutting, and it sends out a signature of sounds and motions, which an EKG does not detect,” Ayazi said. EKGs also do not measure anything from the lungs.

“We can measure both using the same device. We can detect how the breathing patterns are changing and then you can synchronize that with the heart valve,” he said. It could be used as an early detection mechanism sending a signal to a person to go see their doctor or for people who need management of their disease.

“Imagine instead of using stethoscopes which are somewhat dependent on the skills of the physician, all of that is converted into a quantifiable signal coming from a Band-Aid-like arrangement mounted on the skin and transferred to a base station,” Ayazi said.


Seismocardiography is not a new field and provides more information about the motion of the valves. But the challenge since its origins in the 1960s has been there was no small accelerometer that could be worn to be able to take precise measurements. 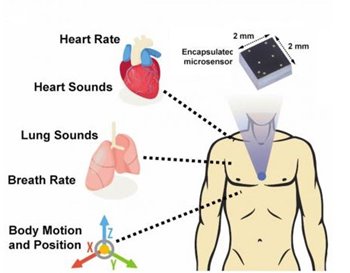 Schematic shows how the system works and what parts of the body are involved. Photo: Georgia Institute of Technology
“Now that we have this ability, the whole field is revived, and there is a lot attention to combining this with flexible variable technologies and wireless modules to manage heart disease and lung disease. We are just scratching the surface now and there are many applications [beyond the heart and lungs]. The development of a sensor was really key,” Ayazi said.

The team has also developed the wireless patch that will be part of the package and is looking to reduce its size to make it very small. Work still to be done on the entire package includes a wireless link or storage unit to store the data that is extracted from the body and a battery to operate it.

Now, in partnership with an Emory University cardiologist, the team expects to start a clinical trial soon to determine efficiency using the larger wireless patch that is envisioned for the final package.

“You can expect to be hearing from us over the next year,” Ayazi said. “We’re very excited about the prospects of this.”