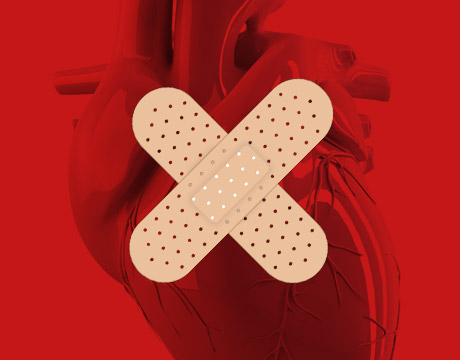 A new cardiac patch engineered by nanotechnologists at Tel Aviv University offers a promising – and less invasive – alternative to heart transplantation and bulky mechanical assistive devices. Integrating both living tissue and nanoelectronics, the so-called cyber heart patch is a bold new direction in the repair of structural heart damage, with future implications for the treatment of degenerative brain or spinal cord conditions.

The U.S. Centers for Disease Control and Prevention (CDC) says more than five million Americans are living with heart failure today, and the disease is on the rise as our average life expectancy increases. For the most severely ill patients, heart transplantation remains the treatment of last resort when drugs or assistive devices fail. The growing demand for donated hearts is outpacing the supply more rapidly than ever. Consequently, an estimated 25% of patients on the heart transplant waiting list will die before a suitable donor is found.

Although tissue engineers have been experimenting with repair patches using all-organic tissues, the new device is the first to incorporate electronics to help physicians remotely monitor and regulate heart function, says lead researcher Tal Dvir of TAU's Department of Microbiology and Biotechnology, Department of Materials Science and Engineering, and Center for Nanoscience and Nanotechnology. In a recent Nature Materials article, Dvir introduced his patch as a “conceptually new approach where a dedicated freestanding electronic network is built within an engineered tissue and used to collect data from its surroundings.”

CDC estimates about half of newly diagnosed heart failure patients die within five years. The disease is a contributing factor in one of every nine deaths each year. As an age-related disease, heart failure is more common as U.S. life expectancy increases and more patients live long enough for their disease to progress to the end stage.

Depending on the severity of the disease at diagnosis, doctors treat heart disease with drugs or mechanical implants such as left ventricular assist devices (LVADS). Several groups around the world are pursuing the ultimate mechanical treatment, a total artificial heart. Meanwhile, heart transplantation is considered the “destination” treatment for patients who have run out of other options. A transplant may be the ultimate course of action for patients with coronary heart disease, cardiomyopathy, hypertensive heart disease, or congential/valvular disease. There are approximately 4,223 people waiting for a heart transplant, and on average they wait about four months before a suitable organ materializes. That’s too long for many patients with end-stage heart failure, about half of whom die within a year of their diagnosis.

The LVAD is currently used as a bridge therapy to keep patients alive until a donor heart becomes available. The technology has saved or prolonged lives but is not a permanent solution. The promise of Dvir’s bionic patch is for a less obtrusive technology that can both assist the heart and help it to regrow itself.

In a typical cardiac patch, expanding/contracting cells are seeded onto a degradable biomaterial that can be implanted on the heart. The biomaterial supports the cells long enough for them to bind to the host organ and then dissolves, leaving the cells in place to function as a patch. Dvir’s team wanted to add critical new features to a patch that could continually report back on how the implanted cells were functioning and provide a way for doctors to monitor and control the device’s performance after treatment.

The team fabricated a porous electronic mesh with multiple electrodes to capture data on tissue function, to send electrical current to cells, and to release drugs to achieve desired effects such as cell growth. The electronics and cardiac cells were integrated with a 3D biomaterial scaffold composed of nanofibers to form the tissue, which was then folded into a thicker, standalone patch.

Sensors and electronics on Dvir’s bionic patch can measure heart performance and deliver appropriate levels of electrical stimulation to keep it pumping optimally. Electroactive polymers embedded in the patch can be activated to deliver medication directly to the heart. These capabilities would make it possible, he says, for doctors to monitor and assess a patient’s health status from a remote computer, and to adjust the heart rhythm or release drugs as needed. Ultimately the group hopes to design a self-regulating patch that can autonomously sense, recognize, and intervene on certain changes in heart function.

The breakthrough is "very science fiction, but it's already here, and we expect it to move cardiac research forward in a big way," Dvir says.

Learn about the latest trends in bioengineering at ASME’s NEMB Conference.

For Further Discussion
It's very science fiction, but it's already here, and we expect it to move cardiac research forward in a big way.Dr. Tal Dvir, Tel Aviv University