Inspired by the traditional Japanese art of paper cutting, Harvard researchers have created a mathematical framework that can turn any sheet of material into any shape.

Now researchers from Harvard’s John A. Paulson School of Engineering and Applied Sciences (SEAS) have created a tool that, with the right cuts, can turn a flat material into any shape imaginable.

“I wouldn’t go so far as to say it’s a proof,” said Levi Dudte, a graduate student in the Mahadevan lab at the School and co-author of the paper published in Nature Materials. “But we feel strongly that it is possible to transform into any shape you want given enough resolution to your cut pattern.”


From Folding to Cutting


Dudte and his colleagues did similar work a few years ago showing that origami tessellations could be used to create any shape. He applied a similar kind of thinking to kirigami: The algorithm he has created will take a target shape and transform it into a cut pattern. The actual tranformation will require tugging in just the right places and in just the right directions. 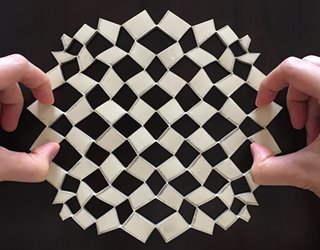 With the right cuts a flat square can become a circle—or anything else you can imagine. Photo: Harvard SEAS
“There are very clear energy barriers between the initial state and the final configuration,” Dudte said. “It gets frustrated when it has to go from the pattern to the deployed configuration.”

Though the mathematical framework can theoretically produce any shape, it has only produced a handful of actual prototypes so far. “That process was super satisfying,” Dudte said. “I remember seeing the first result, that allowed us to transform a square into a circle, and I thought that was the coolest thing ever.”

Further Reading: How to Engineer a Foldable Kayak

The cuts their algorithm suggests are not necessarily intuitive, at least not to Dudte and his fellow researchers who did not have backgrounds as Kirigami artists.

“I honestly felt like I had no expectations for what the cut patern would be for a particular result before the optimization,” Dudte said. “Once we saw the results, we were able to explain, ex post facto, why the cut pattern would produce what we saw.”


Now that both kirigami and origami have been shown to be capable of producing any shape, how’s an engineer to chose between them? It depends, of course, on the application, but it helps to see the two art forms as opposites.

Origami takes a flat structure and makes it more compact, whereas kirigami goes from something small to something larger. “Origami is like an organized  form of crumpling,” Dudte said. “With Kirigami you are tearing material, opening it up.” So, in terms of material used, the kirigami technique would be more efficient if the shape it creates is meant to be ventilated, with plenty of open space.

“We would love to see these sorts of idea used in architecture and design,” Dudte said. “But the strongest case would be deployable structures and mechanical metamaterials.” Solar panels destined for space and emergency shelters that can pop up on site are two such possible applications.

Right now, anyone with a lasercutter and Dudte’s program could make the shapes he and his team produced. But Dudte hopes to ramp up the process for engineers. The next step is to try materials beyond paper and “to get a strong sense of the practical limitations or feasibility of all these patterns,” he said. “Let’s try to build them out of rigid materials, out of rubber, out out of fabric, and see what works.”

The math and engineering behind origami has been explored for several decades, making it both a sophisticated artform and a well-used tool for engineers. Kirigami has some of the same potential, and Dudte believes that ideas from origami research will soon start to flow into the kirigami field and produce similar results.

“Kirigimi is in its infancy right now,” he noted.