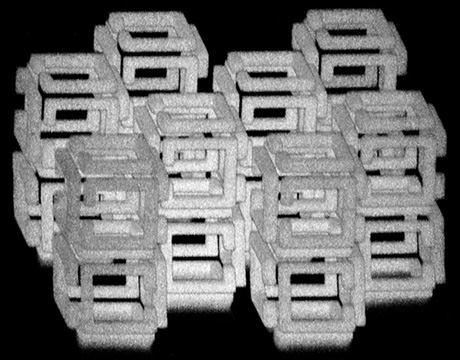 Researchers have devised a way to create 3D nanoscale objects by patterning a larger structure with a laser and then shrinking it. Image: Daniel Oran / MIT

It’s not easy to 3D print nano structures. Building one, a layer at a time, can be laborious and time-consuming. The type of material that can be printed is limited, while the complexity of the object also complicates the process.

Engineers and scientists at the Massachusetts Institute of Technology (MIT) are working to change that by developing a new technology to easily fabricate nanoscale 3D objects of nearly any size or shape.

Using a technique called “implosion fabrication,” the engineers can create nearly any type of object by patterning a polymer scaffold with a laser. Various components or materials can be welded onto the structure in specific patterns, such as quantum dots and DNA. The structure can then be shrunk to one-thousandth of the volume of the original size.

“It’s a way of putting nearly any kind of material into a 3D pattern with nanoscale precision,” said Edward Boyden, professor of biological engineering and brain and cognitive sciences at the MIT.

Several years ago Boyden and his students developed a high-resolution imaging technique for brain tissue. Calledexpansion microscopy, it involves embedding tissue into a hydrogel and then expanding it, allowing for high-resolution examination with a microscope.

The team came up with the idea for implosion fabrication by wondering what would happen if, instead of expanding the hydrogel with an object inside, they shrank it.

The first step was the construction of the scaffold from a very absorbent material made of polyacrylate. The scaffold was bathed in a solution that contained molecules of fluorescein, which were attached to the structure at specific sites using laser light. The molecules served as anchors that can bind to other types of molecules that will be part of the structure.

After the object was fully assembled, the engineers dehydrated thepolyacrylate scaffold with an acid. The acid blocks the negative charges in the polyacrylate scaffold so that they no longer repel each other, causing the gel and the attached structure to uniformly shrink to one-thousandth of its original size.

“The biggest challenge was figuring out how to make connected conductive structures in a substrate that expands and contracts,” said Daniel Oran, a graduate student on the team. “Being able to accurately percolate nanoparticles and then sinter them inside of a shrinking substrate without distortion was certainly the hardest part of this process.”

In order to achieve highly conductive nanoparticles, the team needed to optimize the patterning, silver growth, shrink, and sintering processes.

“Since there were so many variables present between these four aspects of the process, it took nearly two years of time and effort to explore the space of possibilities and settle on a process that was reliable enough for creating conductive structures,” he said.

The research team was able to shrink objects 10-fold in each dimension for an overall 1,000-fold reduction in volume. Currently, they can create objects that are around one cubic millimeter, patterned with a resolution of 50 nanometers. Implosion fabrication has potential for creating nanolattices or nanoparts for next-generation devices. For example, it is possible to pattern chains, socket joints, and other parts that cannot be made with traditional lithography.

The MIT team is exploring other ways to use this technology. Potential fields include optics, medical devices, and robotics.

Perhaps the most exciting part of implosion fabrication is its accessibility—many biology and materials science labs have the necessary equipment to begin shrinking objects to thenanoscaleon their own.

“With a laser you can already find in many biology labs, you can scan a pattern, then deposit metals, semiconductors, or DNA, and then shrink it down,” Boyden said.

Ultimately, the team sees no limit to the technique’s possible applications. “There are all kinds of things you can do with this,” Boyden said. “Democratizing nanofabrication could open up frontiers we can’t yet imagine.”

For Further Discussion
There are all kinds of things you can do with this. Democratizing nanofabrication could open up frontiers we can’t yet imagine. Prof. Edward Boyden, MIT