How Long Can a Drone Stay in the Sky?

How Long Can a Drone Stay in the Sky? 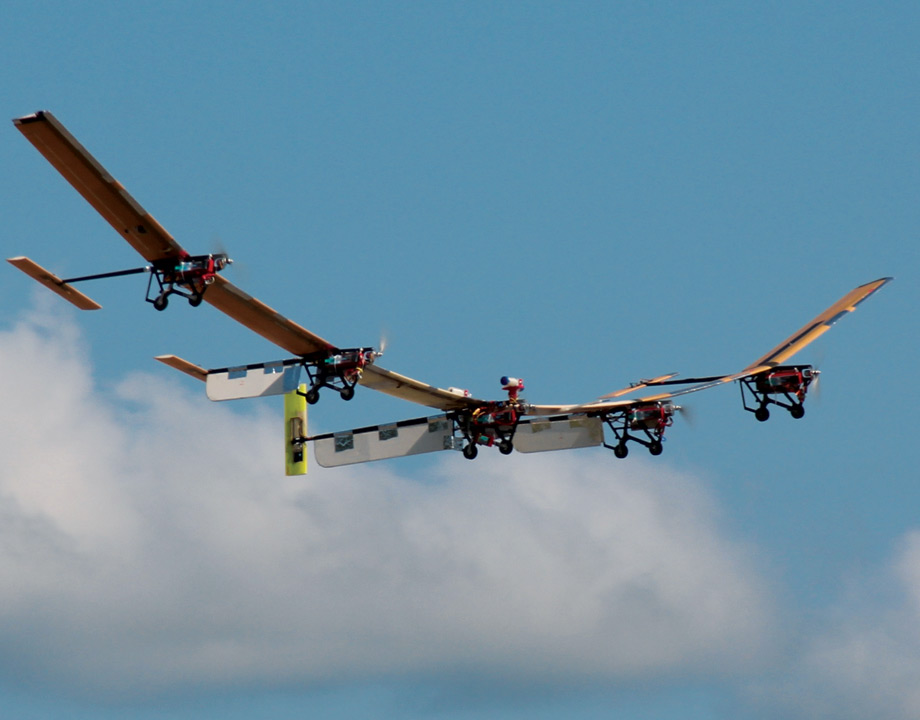 Aerospace Air Transportation Robotics
Interest is booming in high-altitude, long endurance (HALE) unmanned aircraft that can stay aloft for months at a time. Potential applications range from satellite alternatives for wireless and internet service to military and civilian sensing and reconnaissance.

For these dreams to come true, HALE aircraft need to stay aloft for weeks or months at a time. A new wing technology being developed at University of Michigan could help make that possible.

In order for HALE UAVs to stay aloft for three months (the current target) they need to harness solar energy efficiently. One way to do that is to have long and narrow wings. In fact, a 50 percent increase in wing aspect ratio can reduce fuel consumption by 10 percent. 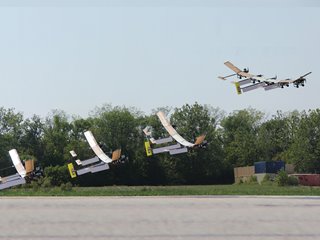 X-HALE takes off on a mission to verify a model of long, thin wings used to improve flight efficiency. Photo: University of Michigan
But remaining aloft also requires very light aerostructures. That means eliminating the heavy supports that keep wings stable. The result: Wings that flop around and deform during flight.

“The aeroelasticity of the craft coupled with flight mechanics makes it a real unique case,” said Carlos Cesnik, a professor of aerospace engineering who works on high aspect ratio wings. “Because they’re so flexible and deform a lot, their behavior can change in the air with only moderate atmospheric disturbances. As a result, commanding and maneuvering the aircraft becomes challenging.”


To test drive such uncertainties, Cesnik and his team have developed an unmanned experimental plane called X-HALE (experimental HALE) and a complementary flight simulation software.

The two aspects of the study feed into each other. X-HALE allows the team to collect data that validates (or not) the flight model they are developing to analyze this type of aircraft. Their simulations, in turn, enable them to design future flight experiments to predict more accurately aircraft behavior.

Dynamically, X-HALE mimics the behavior of larger HALE aircraft in flight. Its wings share the same 30 to 1 aspect ratio as Helios, a NASA-AeroVironment HALE aircraft that failed due to unanticipated coupled response to flight disturbances.

“X-HALE shows similar kinds of dynamic behavior and potential coupling with flight dynamics that we would see in a larger-scale vehicle,” Cesnik said. 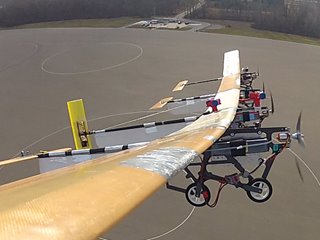 X-HALE banking over a runway. Photo: University of Michigan
Unlike its brethren however, X-HALE uses batteries rather than solar cells.

The simulation software enabled the team to design a stability augmentation system, a closed loop controller that increases the UAV’s lateral stability. This enables drone pilots to position the aircraft more precisely before turning off the controller so they can collect dynamic and coupling data for code validation.

Cesnik’s team runs its flight tests in calm air after outfitting X-HALE with a string of high-intensity LED markers along its wings. Once the aircraft is steady, the team applies controlled excitations that mimic real-life atmospheric disturbances and measures the resultant reactions. Onboard stereo cameras document this behavior by recording the changing position of each of the LED markers during the flight. Cesnik’s team later uses this data to examine wing shape and vehicle response.


The team’s biggest takeaway so far is that engineers need to design flexible aircraft differently, Cesnik said. Right now, they use a sequential analysis and design workflow to create conventional wings.

The X-HALE aircraft trials show that there’s a significant phase lag between control inputs and aircraft response. On the positive side, the aircraft could tolerate a minimum disturbance before lateral and longitudinal deformation forces wreaked havoc.

Further Reading: Long-Range Drone Takes Off, Lands like a Bird

“The question we have to work around as we design future HALE aircraft is, how large does this disturbance have to be before it causes a problem,” Cesnik said.

X-HALE, Cesnik said, provides a testbed to directly investigate flight phenomena associated with flexible aircraft. It also enables his team to design and validate robust modeling, analysis, and simulation software that can cover a broader range of conditions.

“We need to know that the math and the models and their implementation correspond to reality or that we have captured them within some [known] level of uncertainty,” he said.

Ultimately, he hopes to develop software that enables airframe companies to build commercial transport airplanes with more flexible wings. The same efficiency improvements that enable HALE aircraft to stay aloft longer could help reduce fuel usage and carbon emissions in those aircraft. Being able to efficiently and safely control and maneuver such large-wing aircraft would be a boon across the industry.

Poornima Apte is an engineering writer based in Boston.