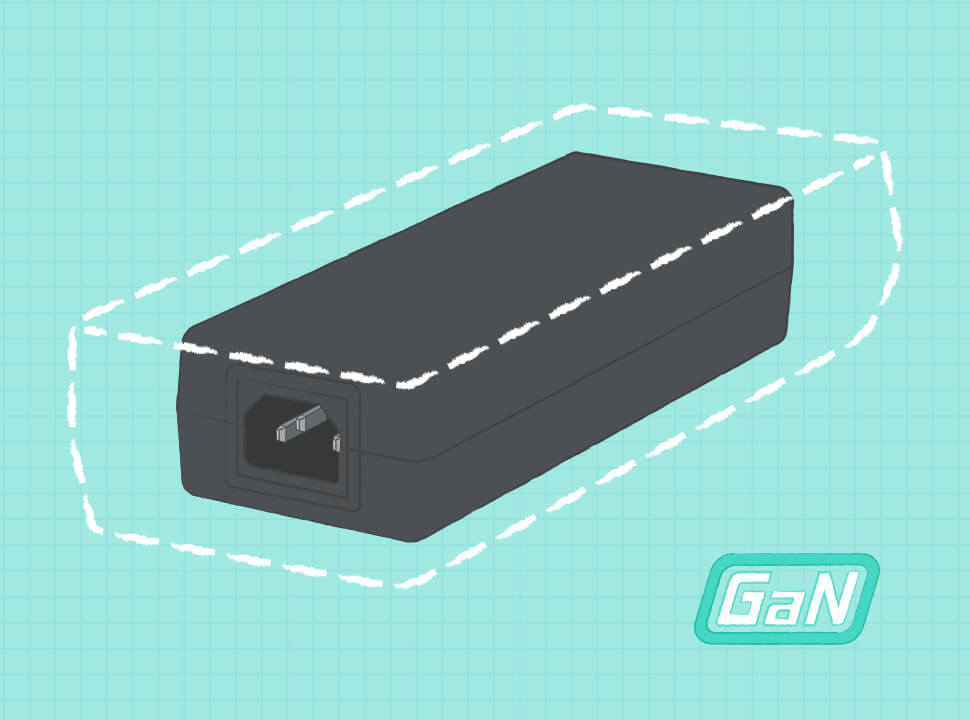 Gallium Nitride is a wide band-gap semiconductor material, which can be used to make semiconductor devices such as diodes and transistors.

One of the most common transistors in switching power supplies is a metal–oxide–semiconductor field-effect transistor (MOSFET). While popular, MOSFETs experience losses in the silicon when operating at high switching frequencies. Power designers have begun to turn to GaN as it has become increasingly difficult to increase performance as MOSFETs near their physical limits.

Gallium Nitride (GaN) is a wide band-gap (WBG) semiconductor material, and like silicon, GaN can be used to make semiconductor devices such as diodes and transistors.

A power supply designer would choose a GaN transistor instead of silicon if they were targeting a small form factor and high efficiency. The losses in a silicon MOSFET make their use undesirable due to thermal management requirements, compared to a GaN transistor, which would dissipate less power and more efficiently conduct heat away.

The development of GaN transistors has been of particular interest to the power electronics industry. As a transistor, GaN shows significant advantages over silicon in critical areas that allow power supply manufacturers to significantly increase efficiency, while at the same time decreasing the size and weight of their devices.

How Does GaN Improve Efficiency? 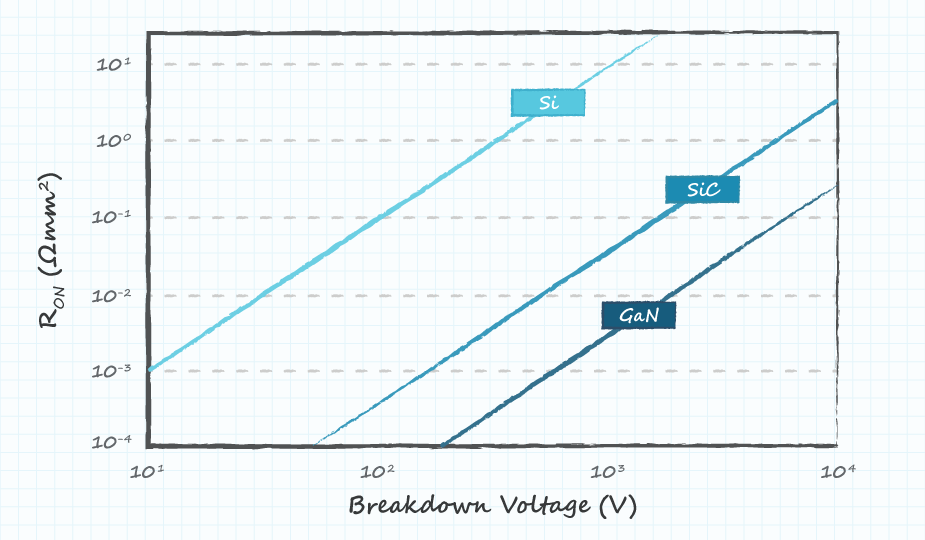 Figure 1: Theoretical limits of resistance between drain and source versus breakdown voltage for Si, GaN, and SiC transistors. Photo: CUI
When on, GaN transistors (like those made of silicon) resemble a resistance between drain and source, often referred to as Ron, and the conduction losses are proportional to this resistance. A key benefit of GaN and other WBG materials is their relationship between breakdown voltage and Ron. Figure 1 shows the theoretical limits of this relationship for silicon, GaN, and silicon carbide (SiC), another WBG material. It can be seen that for a given breakdown voltage, the Ron of the WBG devices is much lower than that of silicon, with GaN being the lowest of the three. As silicon is nearing its theoretical limit, the use of GaN and other WBG materials becomes necessary if improvements to Ron are to continue.

In addition to improvements in conduction losses, the use of GaN also leads to a reduction in switching losses. Multiple factors contribute to switching losses, several of which are improved through the use of GaN. One loss mechanism results from the fact that the current in a FET begins to flow before the drain-source voltage begins to fall, as shown in Figure 2. During this time, the losses (equal to the volt-amp product) are very large. Increasing the speed at which the switch turns on will reduce the losses incurred during this transition. Because GaN transistors can turn on faster than silicon FETs, they are able to reduce the losses caused by this transition.

Figure 2: Drain Voltage and current waveforms during switching transition. Photo: CUI
Another way that GaN reduces switching loss is through the absence of a body diode. To avoid a short circuit condition, a period of time exists when both switches of a half-bridge are off. This is known as the “dead-time.” During this period, current continues to flow, but because both switches are off, it is forced through the body diode. The body diode is much less efficient than the Ron resistance of a Si-MOSFET when it is on. For a GaN transistor, there is no body diode. Current that would flow through the body diode of Si FET instead flows through the Ron resistance. This significantly reduces the losses incurred during the dead-time.

Because the body diode of a silicon transistor conducts during the dead-time, it must be turned off when the other switch turns on. During this time, current flows in the reverse direction as the diode turns off, causing additional losses. In a GaN transistor, the absence of a body diode results in near-zero reverse recovery losses.

How Does GaN Decrease Form Factor?

GaN and other WBG devices also have better thermal conductivity and can withstand higher temperatures than silicon. Both help to reduce the need for thermal management components such as bulky heatsinks, frames, or fans. The absence of these devices (along with the shrinking of the powertrain components mentioned earlier) all lead to significant reductions in the overall size of the power supply. 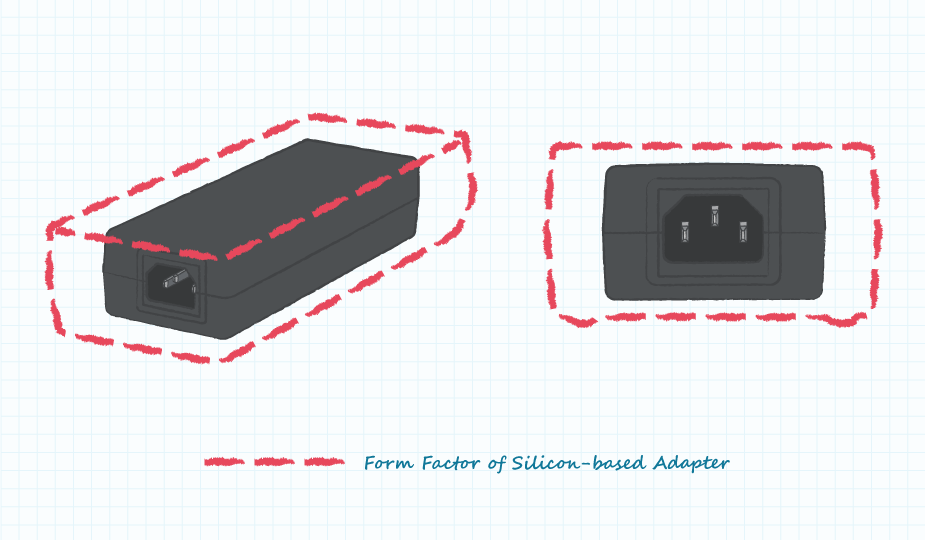 Figure 3: Comparison of Si based and GaN based adapter form factors. Photo: CUI
Improved efficiency, decreased size, and reduced weight have all been achieved, through the application of GaN, in CUI’s latest series of desktop adapters. For example, CUI’s SDI200G-U desktop adapter’s increased switching frequency has allowed its size to be reduced by more than half, increasing the power density from 5.3 W/in3 to 11.4 W/in3, which can be seen in Figure 3. This has also resulted in a weight reduction of 32% (820g to 560g). And by reducing conduction and switching losses, the adapters achieve efficiencies up to 95%. These GaN desktop adapters offer significant improvements to efficiency, size, and weight over conventional silicon-based supplies.

Power supply manufacturers are always seeking ways to increase the efficiency and power density of their products. Many of the gains over the years have come from improvements to the silicon switches used inside the power supplies. But as silicon reaches its physical limits, manufacturers have had to look elsewhere for improvements. The use of GaN (with its lower losses and faster switching) allows manufacturers to push past the limitations of silicon and design smaller and more efficient power supplies while still leaving room to improve as GaN continues to develop. These improvements can be seen first-hand in CUI’s latest generation of GaN-based adapters.