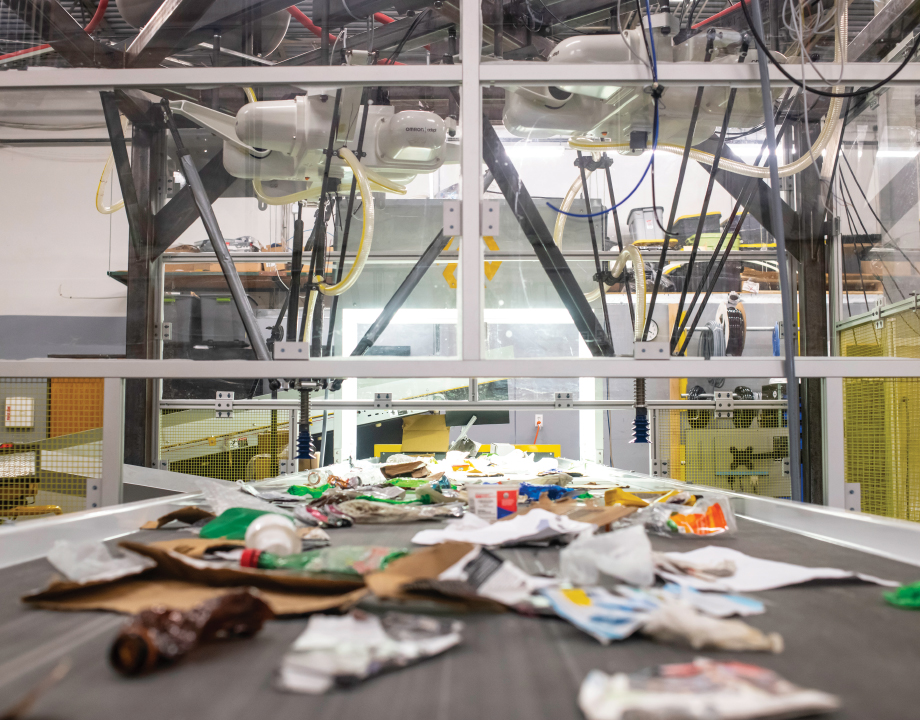 How Are Robots Helping Us to Recycle Better

The front end of recycling is familiar to the point of invisibility: Blue bins, clear bags, and barely comprehensible signs designating which material goes where. Once the right plastic or paper is put in the right place, most people forget all about it.

For the actual recycled material, though, that’s not the end of the journey but rather the beginning. Most of it gets trucked to a special recycling facility, where it is unceremoniously dumped on a concrete floor. Front-end loaders scoop bottles, papers, and myriad other materials onto conveyors, which zoom off in various directions, often climbing to different levels like staircases.

In spite of the hubbub and looming machinery, humans play a key role. Workers are stationed at strategic locations along the conveyors, grabbing certain materials as they go by and placing them in a container to be taken somewhere else for further processing.

That sorting job has up to now been too complex for machines to handle. But in a scenario becoming more common, robots are beginning to chip in. In some facilities a mechanical arm may extend down to the conveyor, pluck a plastic bottle using an air-powered suction cup, then swing around and deposit it in the container.


Robots have functioned for years on assembly lines, such as in automotive plants, where they perform the same task repetitively. But companies are discovering how to couple robotics with artificial intelligence in order to allow them to make the kinds of judgements needed in sorting recyclables. 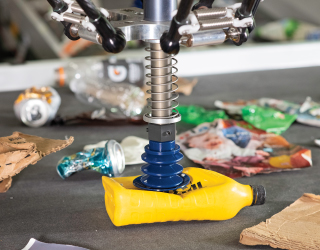 When the belt spots an item, a delta-style arm swoops down and grabs it with a suction gripper. Photo: AMP Robotics
It isn’t the kind of high-profile task normally associated with machine learning, such as driving automobiles or finding cancerous growths in medical scans, but it could save recycling companies—and by extension, municipalities—money.

“We view ourselves as a drop-in replacement for any line they’re running but most specifically where they have humans doing the sorting,” said Mark Baybutt, director of engineering and R&D at AMP Robotics, a manufacturer of recycling robots in Louisville, Colo. “We are commonly deployed onto residual streams, kind of a last chance reclamation, to pull anything that would otherwise go to the landfill.”

All recyclables need to be separated into individual streams—aluminum can’t be mixed with paper and plastic when it is being remelted for reuse. That separation can be done at the point of collection, which is why some bins are persnickety about what gets tossed in. Some recycling centers—known as material recovery facilities or MRFs—will accept all the material mixed together in a few or even a single stream and do the separating themselves.

With single-stream collection, MRFs receive the mixed material and sort it all employing a combination of humans and machines such as screens, rotating discs, forced air, density-based separation, magnets, optical material identification, and eddy current. After being sorted, items are baled and prepared for shipping to their final recycling destinations.

Single-stream collection is more convenient for consumers, which lowers the barriers to recycling, and it enables one truck to transport all the materials together. But those advantages come with a tradeoff: Contamination. As much as 20 percent of any given load of single stream material may be unfit for recycling, being either the wrong items or tainted with dirt, chemicals, water, or food.


Recyclers could ignore contamination as long as China was willing to import huge quantities of materials. China was an easy market and would accept contaminated material without balking. That changed in late 2017, when China enacted its National Sword Policy, which effectively banned the import of scrap materials for recycling, causing turmoil in U.S. recycling material markets. 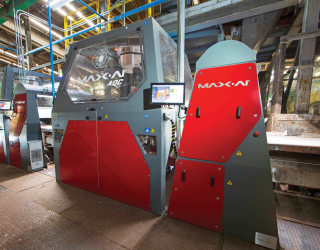 According to its manufacturer, Max-AI couples neural networks to a vision system in order to identify objects much the way a person does. Photo: Bulk Handling Systems (BHS)
At first, brokers sent their materials to other Asian countries such as Vietnam, Thailand, and Malaysia, but they’ve since enacted bans of their own.
The lack of export markets for recyclables has put pressure on American recyclers to do a better job of sorting materials. They’ve turned to artificial intelligence to do that more efficiently.

Machine learning, neural networks, or the catch-all term artificial intelligence (or simply, AI) mean different things in different situations. For the AI being employed at MRFs, it’s an algorithm connected to a computer vision system that can recognize materials based on visual cues. For example, with plastic bottles, computer vision and machine learning combine to recognize different colors, polymers, textures, shapes, sizes, and patterns.

“We train the neural network on images that we’ve seen both in the past and what we have coming across the material stream,” said Thomas Brooks, a mechanical engineer who is director of technology development at Bulk Handling Systems, a manufacturer of bulk sorting systems. “You train the system on any number of different attributes of an object. That neural network becomes the brain or the sorting algorithm.”

Once the system distinguishes between, say, clear and opaque bottles, a robotic arm is then activated to pick targeted items.


The robotic arm can use a gripper, like a human hand, or a suction cup to pluck items off the conveyor, all powered by plant compressed air. The robot is often a delta-style configuration, with three arms connected at the base, giving the appearance of a long-legged spider.

The use of robots allows facility operators some new flexibility.

“Most technologies used in recycling allow you to differentiate two materials,” Brooks said. “With the use of robotics and artificial intelligence, you’re allowing more flexibility in the way you sort materials.”

Brooks said that his company’s system can separate up to six different materials in one stream.

“A lot of these materials can be difficult to sort through and accurately identify one from the other,” Baybutt said. “A vision-based deep learning system keys into features that are more subtle than what humans might be taught. We can key into and identify the different materials accurately, thereby improving the purity.”

One example is mixed paper. They can target higher-quality items like office paper or corrugated cardboard and other items that humans might miss.


Is this another example where machines are taking jobs from human workers? “A lot of our customers are open to having robotics augment or take over some of the jobs,” Baybutt admits. But he adds that it’s dull, dirty, and sometimes dangerous work, and recycling center operators are having problems finding enough people to enable MRFs to run 24/7. “It is addressing the labor shortages that occur in this industry.”

With the progress made in the advancement of AI robotic systems in recycling, they are showing up at MRFs around the country. Waste Management, the nation’s largest trash and recycling processor, began testing the technology in 2017, when it installed a robot at one of its MRFs in Houston, Texas.

The company has also installed a system at its MRF in Germantown, Wis., which processes about 850 tons a day of single-stream material from households and businesses. The system from AMP Robotics recovers plastic bottles and metal cans at the end of a paper line.

Bazuin adds that the plant has put in requests for more robots.

Brooks reports that this customer satisfaction is the norm. “It’s very popular,” he said. “We’ve got robotic sorters in facilities around the world.”


Why the success? The intent is for robotics to lower costs, reduce manual labor, increase recycling efficiency, and increase the purity of recycled materials. For starters, the robotic arms can exceed human picking speed. A human can pick 50 to 60 pieces a minute off a conveyor while with robotics, the pick rate can range from 70 to 90 per minute.

Further Reading: These Aren’t the Droids You’re Looking For

AI-enabled systems tend to become “smarter” over time as they add new examples to their datasets. Sorting machines will be connected to the cloud and will contribute to a shared pool of information. And once the neural network is well developed, the technology can be inserted in many existing sorting technologies to enhance their performance.

This means that as more companies deploy them, these automated sorters become more effective.

“As the robot sees more and more material, we are constantly updating the neural networks for our customers,” Baybutt said.

Looking to the future, some say AI technology will become the brain of MRFs, controlling various robotic, optical, and other sorting equipment and making autonomous decisions. Information can be fed back to recycling administrators to determine how effective their programs are at collecting the right kinds of materials. It’s all a huge leap from picking materials off a conveyor line by hand.

“It’s an exciting time to be in the space,” Baybutt said. “It’s a confluence of a number of things: sensing, computing power, manipulation. All these items are enabling robotics to get into new and different markets. For us, recycling is the tip of the iceberg.”