Holograms You Can Touch

Holograms You Can Touch 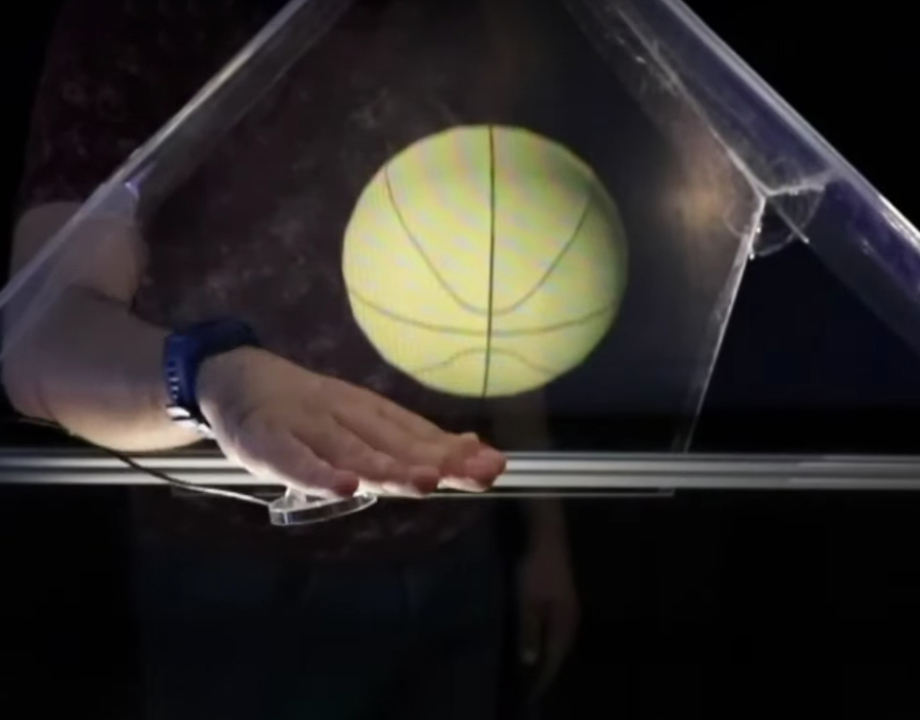 Virtual reality developers have been dreaming of a holographic gaming experience since Star Trek’s “Holodeck” first appeared on TV in the 70s and 80s. Although we can conduct entire hologram performances, the ability to touch and interact with the display is still a thing of science fiction. But, a team of engineers at the University of Glasgow’s James Watt School of Engineering have an idea.

Ravinder Dahiya, professor of electronics and nanoengineering at the University of Glasgow, and leader of the Bendable Electronics and Sensing Technologies (BEST) group, has been working with his global, multidisciplinary team on a number of flexible electronics and touch-based interactive systems. Their latest development is a pseudo-hologram volumetric display that gives the user the experience of interacting with it. 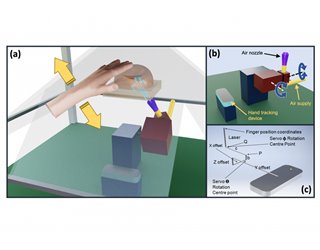 A pseudo-hologram volumetric display gives the user the experience of interacting with it. Photo: University of Glasgow
The three main components of their “aerohaptic” pseudo-holographic display are a Leap Motion sensor, which senses the movement and gestures of the user’s hand; a jet air nozzle, which pushes air onto the user’s hand in response to their movement with respect to the virtual object; and a master computer, which determines how the hologram will “respond” visually to those gestures. So far, the technology is able to mimic the experience of bouncing a basketball, pushing air onto the user’s hand to simulate contact, speed, and pressure with the ball.

Involving as many perception points as possible to the system can help the user feel like it is an authentic experience—think about the artificial engine noise newer electric car models offer to help the driver know whether the car is running. In short, it’s all about making it believable. So, for added user benefit, the noise of the air coming from the jet nozzle may also offer an audible confirmation to the user that they are indeed in control of the ball.

Other technologies are advancing that also attempt to offer a haptic response, most of which involve ultrasonics that generate acoustic waves giving the user a feeling of vibration. But, Dahiya explained, this is a limited experience because there is no sound or sufficient pressure to generate haptic feeling, particularly when the user’s hand is moved away from the source of the acoustic waves.

The system is in its early stages, so there are quite a few ways the BEST team hopes to build upon their work and add even more perception points, including temperature.

“Giving the user hot or cold air could improve the perception,” Dahiya said. “Currently, we have just one nozzle, so having an array of nozzles that are programmed for touch, sound, and even temperature would give the user a much richer experience.” 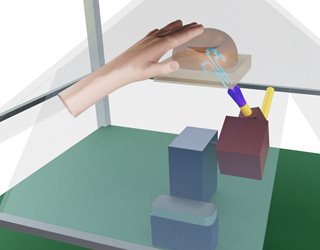 So far, the technology is able to mimic the experience of bouncing a basketball. Photo: University of Glasgow
Dahiya and his team are eager to improve the system further, but there are still some limitations. The biggest challenge is that motion sensors aren’t quite quick enough to match human perception, so there is a minute delay. Further advances in motion detection would improve the system, but according to Dahiya they will have to wait for the technology to catch up.

Watch a Video: Augmented and Virtual Reality Advancements in 2021

The aerohaptic system has received a very positive response even at this early stage, particularly from the gaming community. VR developers are eager to give gamers an experience that would remove the need for wearables, which can be cumbersome. Their interest and early adoption of this technology may help the BEST team propel their work forward and get it on the market sooner.

Dahiya is particularly interested in how the technology could be integrated into healthcare settings. For example, using a digital twin with an interactive holographic display such as this one could be extremely beneficial in teaching individuals how to perform complex medical procedures. They would no longer have to perform on dummies, but rather, could see and feel the results of their movements inside of a simulation.

Take Our Quiz: How Augmented and Virtual Reality Is Enhancing Manufacturing

“Say there is a heart surgeon who cannot be everywhere, especially a remote location, but there is a general practitioner who has some knowledge, but not expertise,” Dahiya said. “This type of system could bring the virtual avatar of the surgeon to the operation theater and guide the general practitioner through a procedure, helping to bridge those gaps.”

The potential for this kind of technology is boundless. According to Dahiya, there is still a long way to go in getting the technology from these early stages to where it needs to be in order to meet the growing appetite for such advancements.