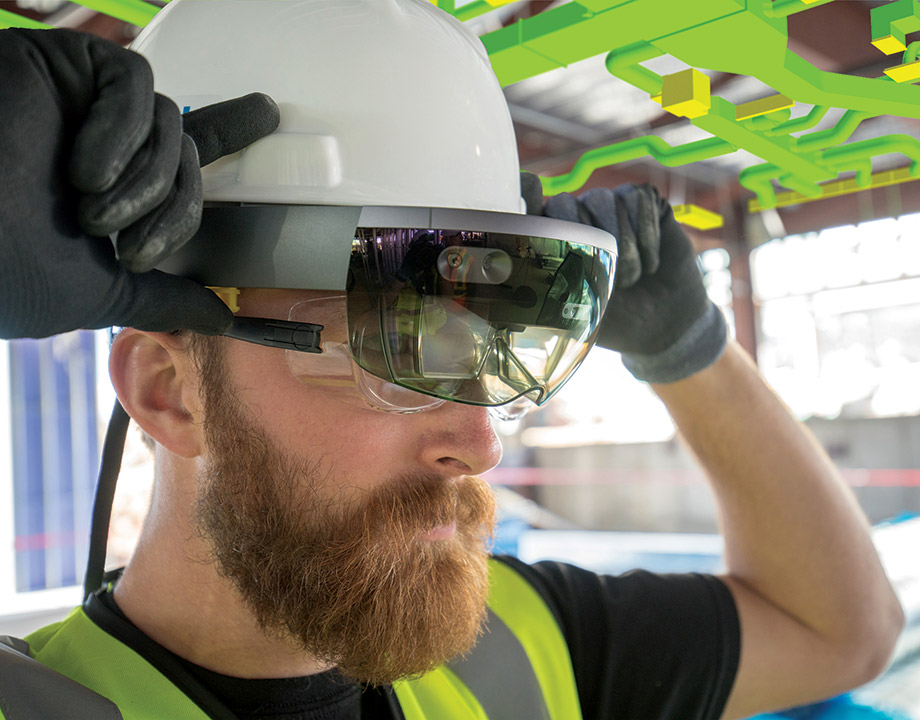 Using a flip visor and finger motion control, workers can lay down virtual images of plans, systems and equipment on the physical jobsite.

Virtual, mixed, and augmented reality are finding their way into a variety of engineering practices, and now the technology is becoming mobile. Technology firm Trimble is partnering with Microsoft HoloLens to combine its software with HoloLens and fit it to a standard hardhat. The device allows workers in the field to lay holographic drawings over the physical jobsite, viewed through a flip visor on the hardhat.

Trimble XR10 with HoloLens 2 improves the company’s first application, using its SketchUp platform designed primarily for architects. “Our SketchUp application is kind of aimed at the architect or the owner for design, review, and sharing within an office environment,” said Jordon Lawver, Trimble’s portfolio manager for mixed reality. “Trimble Connect promises to take that same information, whether it’s SketchUp, Revit, or Bentley, and take it out to the construction site for your general contractors, mechanical contractors, and plumbers and electricians and whatnot, to actually use it in the context and the true meaning of mixed reality.”

Read more about: The Hololens Revolution

Trimble Connect is the firm’s project collaboration platform primarily for the construction industry. Workers on the jobsite can use the cloud-based software on a Windows 10 platform to access a variety of drawings or documents, view them on the visor and manipulate them with their fingers. It tracks eye movements and 10 finger gestures.

“Microsoft has actually added a new depth sensor to the the front of the device among its many other sensors,” said Lawver. “And that sensor is dedicated to tracking your hands in front of the device, at all times at a very high frame rate. It’s tracking 25 different points of articulation on each hand.”

The device shows a mesh overlaid on the user’s hands to provide mapping and allow a more human-like interaction with the data, he said. The menu appears in front of the viewer and is accessed using a finger to tap the appropriate action; the first iteration required the user to extend the arm and pinch the virtual menu or object with two fingers. Scrolling is done as one would do on a mobile phone and holograms can be manipulated by pulling both hands apart to make the model larger.

The user also can rotate the model, flip it and manipulate it—similar to how Tony Stark interacted with his computer in the movie Iron Man, he said.

The second-generation HoloLens offers a new display technology, doubling the field of view, maintaining resolution and increasing the brightness. Lawver says it is more comfortable to wear than the first version, which was front-heavy on the nose. The weight now is more evenly distributed and is a bit lighter. That makes a difference in the field, where workers are expected to wear the system eight hours a day, Lawver said.

The device will be available sometime before the end of the year, and cost about $4,750 with associated software. The Trimble Connect application on HoloLens is a free download for any user of Trimble Connect, he said, and can also be viewed in an office-based environment. Lawver said the firm hopes to build on the success of the first version, which required additional manufacturing runs to meet demand.

Some of that may come from outside the construction and building industry. Lawver said future applications could tailor to manufacturing and the oil and gas industries.