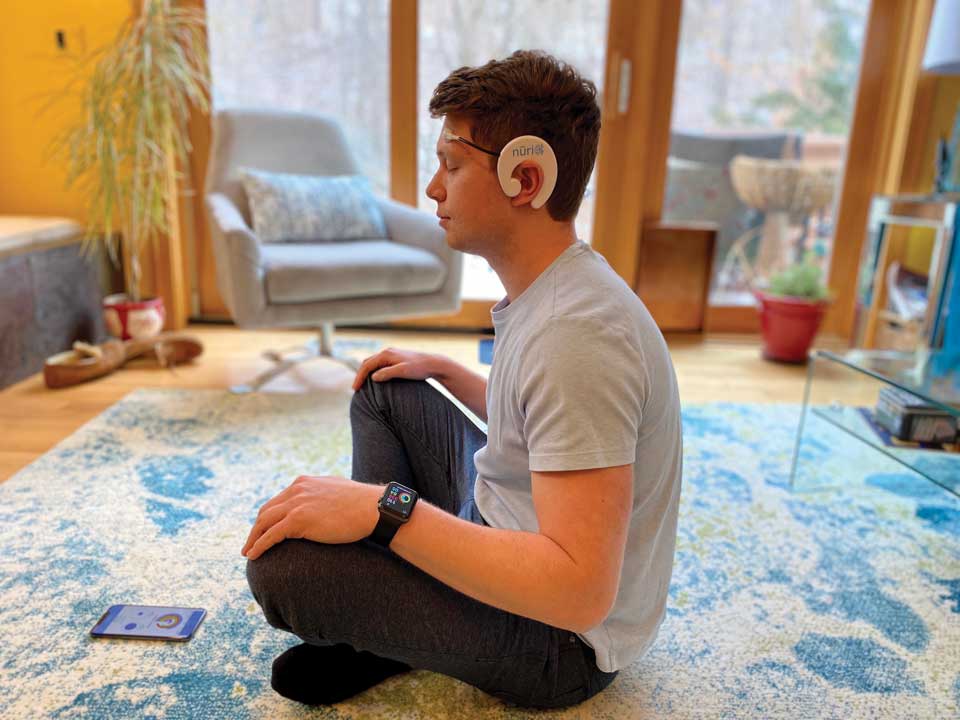 Remotely operated devices may be moving beyond voice commands. Smart devices such as Amazon’s Alexa interpret sound waves to perform commands, but they falter in noisy environments. There may be a more effective system on the way with an EEG device that uses brain waves to control devices. Just think the command, and it is carried out through an app and Bluetooth connectivity.

It may sound far-fetched but the earphone-like device developed by Detroit startup nūrio measures brain waves and uses artificial intelligence (AI) to hone specific brain waves into commands. The device slips over the ear and uses three dry-skin electrodes to pick up the brain waves. A miniature electronic package streams the data using Bluetooth to any computer or smart device. There, an app interprets the patterns.

Once it recognizes the specific pattern associated with a request—Turn off the television—it relays the command to the TV and shuts it off. 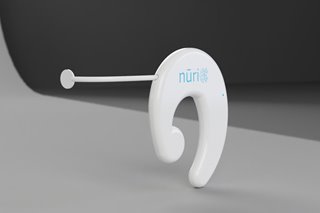 The small EEG headset monitors brain waves and uses machine learning to identify commands. Photo: nūrio
Ian Rowan founded nūrio in 2018, beginning a remarkable sprint toward development and commercialization. An engineer with a background in machine learning and AI, he started work on the device when his voice commands to home smart devices were interrupted by noise. “The volume level from the TV affected my commands to Alexa,” he said. “I thought there must be a better way to control different devices in a home setup without voice.”

Rowan built his first prototype using off-the-shelf EEG headgear, but wanted it to connect to more than one device. “It was pretty easy to add more devices,” he said. “I designed software to convert EEG data to commands based on a user’s training data.”

While this could sound like mind reading, the AI monitors the brain waves associated with a command and maps future waves toward the same direction. Blinking twice activates the device. It learns to generalize patterns and provides data privacy by sending data to the app. It does not reside on the device itself.

That helped in the miniaturization of the device as larger processors in other devices are used to leverage data. After monitoring one minute of thoughts about a category, the algorithms process future waves into commands. 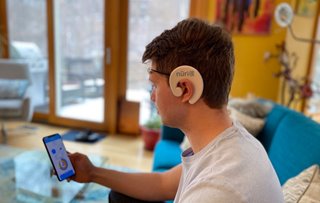 A cellphone app processes the commands and stores data. Photo: nūrio
Making the device smaller was key for it to be marketable, Rowan said. He plowed into research, devising electronic circuits that could fit into a small chip. Rowan patterned the headset from models used by runners on a 3D printer to produce iterations of the device. “I had to bring this into a small package at a pricing level affordable for the average tech user,” he said.

His efforts were boosted last year when he won Protolabs’ Cool Idea Award that brought him a grant and help to further manufacturing. Protolabs used injection molding to produce the plastic casing of the device and will work with nūrio on producing the device’s electrodes once design is complete. Rowan said the device will become available in May and will cost $229 or less.

Rowan expanded tasks the device can manage to include health insights. It monitors waves associated with meditation, calmness, and emotions and records sessions to graph insights of attention during a focus-based task. Using machine learning, nūrio develops a baseline of a user’s mental state that can be used to monitor changes over time.

Rowan noted other devices that perform similar functions but believes the small size and portability will prove attractive in the wearables market. “You’ve got the ability to wear it pretty much anywhere to track mental data,” he said.

For now, Rowan is refining the software but hopes to get the device into the medical market in the future. Healthcare providers can use it for remote monitoring of patients, for instance.