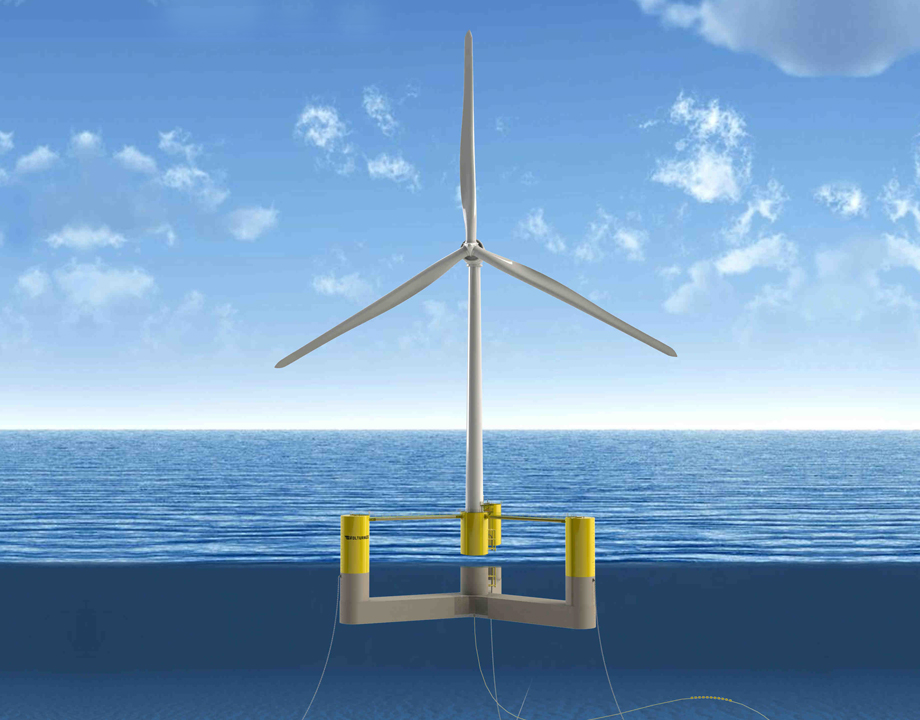 Engineers are gearing up for a new federal program to harness offshore wind energy by creating floating wind turbines to harness wind that blows farther out to sea.

Electric Power Ocean, Offshore and Arctic Engineering Technology and Society Water and Sewage Systems
The Floating Offshore Wind Energy Shot announced by the federal government in September will harness offshore wind to deploy 15 GW wind energy and power 5 million homes by 2035. About two-thirds of the United States’ offshore wind potential exists over bodies of water too deep for “fixed-bottom” wind turbines, which stand on towers affixed to the ocean floor. But that arrangement only works in waters of 50 feet or less.

Floating wind turbines—which, as their name implies, float on concrete platforms towed out to deep water—are a way to harness the stronger winds that blow farther offshore. About two-thirds of the nation’s offshore wind energy potential is found in water deeper than 50 feet, according to the Biden administration.

The initiative also calls for a 70-percent reduction in the cost of floating offshore wind in deep waters to $45 per MWh, also by 2035, and is a big move because there are only three floating wind farms in existence around the world.

In the United States, planning for development is just beginning, according to the Department of Energy's National Renewable Energy Laboratory. In late 2021, Maine submitted an application with the Bureau of Ocean Energy Management to lease a 15.2-square-mile site in the Gulf of Maine for the nation’s first floating offshore wind research site in federal waters. Hearings on that proposal continue.

The engineers modeling these turbines and the floating arrays are essentially starting from scratch. That is difficult not in part because the floating turbines are the largest rotating machines every constructed and come with unique engineering challenges—known and unknown, said Matthew Hall, an NREL researcher.

“Along with design elements, engineers need to consider performance, cost, logistical, and reliability implication and the impacts of the wind power plant on the environment and other ocean users,” Hall said.


Become a Member: How to Join ASME

Also, the design of floating wind platforms is particularly challenging because each design element affects all the others. Elements include the individual floating offshore wind turbines, the turbine array layout, the mooring lines and anchors, and the subsea power cables, Hall added.

Those challenges are the impetus for the Floating Wind Array Design Project. The project, from the NREL, will provide needed digital tools for the engineers who will be designing these machines for the first time. The NREL is charged with developing tools with which engineers can factor local condition--like water depth, mooring lines, and power cables that run between the turbines—into their designs.

"Researchers will also use the tools they’ve designed to develop what they call “reference floating offshore wind turbine arrays” specifically matched to United States conditions," Hall said. "Those designs can then be used as baselines for research and development that advances floating arrays."

In another bid to move design forward, DOE recently announced a $6.95-million prize competition for engineers who optimize the floating platform technologies and get them ready for wide-scale domestic manufacturing and commercialization, according to the department.

One tool from the NREL for predicting power, performance, and structural load of wind turbines already exists. The one-year-old FAST.Farm addresses the dynamics of, and interaction between each individual turbine in a wind farm.


Listen to the Podcast: Wind Energy Looks to Additive Manufacturing

“It can also be used to model floating offshore wind farms but will need to be orders-of-magnitude-faster for modeling array designs,” Hall said. “The project will build on existing FAST.Farm capabilities so engineers can integrate with cost, logistics, and impact on the environment or on other ocean users—into their models.”

This NREL project will fill these gaps with a model that represents seabed soil characteristics and the strength of different types of anchors moored in those types of soil, Hall added.

With these and other steps, NREL is working to provide floating wind turbines a place in the U.S. energy mix.