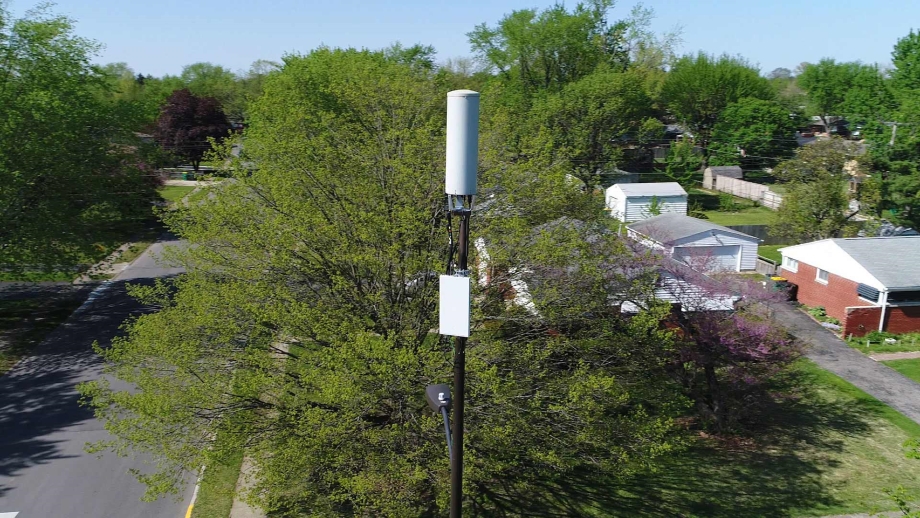 Advanced Manufacturing Energy Technology and Society
The 5G standard for broadband cellular networks may do away with the need to constantly recharge the batteries in your phone, smart watch, and Bluetooth devices, say researchers at the Georgia Institute of Technology.

In fact, their technology could help put an end to batteries altogether.

Every electronic device around us needs power to function. Most of them, including the billions of sensors that power the Internet of Things, rely on batteries for power supply. What if a wireless network could supply the juice?

Georgia Tech researchers have come up with a way to tap into the excess energy from 5G networks and turn them into “a wireless power grid,” said Manos Tentzeris, a professor of electromagnetics at Georgia Tech who led the research. 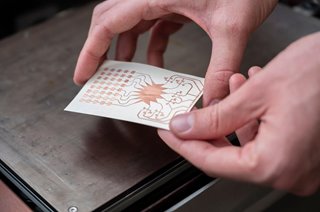 A team at Georgia Tech has developed a small, 3D-printed antenna that can harvest power from 5G waves. Image: Georgia Tech
In essence, the Georgia Tech discovery helps funnel 5G waves to devices, so they don’t have to rely on batteries, said Aline Eid, senior researcher in the Athena lab, which studies technologies for electromagnetic, wireless, and other applications.

In the future, electricity providers could even offer power on demand “over the air,” Tentzeris said.

In 2019, cell phone companies began deploying the 5G-technology standard, which will be the successor to the 4G networks on which most of today’s cellphones operate.

“5G is going to be everywhere, especially in urban areas,” Tentzeris said.

Because 5G networks are specifically built for high-bandwidth connection, the U.S. Federal Communications Commission has authorized them to focus power much more densely than 4G networks. That means the high-frequency network will have a great deal of unused power that—unless “harvested”—will be wasted, he said.

That harvested energy could fuel the many battery-powered devices around us, like the sensors that help make up the IoT and that monitor conditions in homes, cities, autonomous cars, and even—via wearable electronics—inside our bodies, he said.

“There’s been a lot of discussion of biomonitoring,” Tentzeris said. “In a wearable configuration, for monitoring glucose or blood pressure or sleep, you could have systems literally working for years and without the need for a battery charge.”

The energy could be used for sensors in rugged environments where batteries aren’t an option, he added.

Power-as-a-service may well be a way for the telecom industry to supply electricity in the same way that many software makers today provide access to their applications in the cloud rather than through downloadable software, he added.

Doing away with batteries will be a boon to the environment, Eid said.


In order for a world without batteries to come to pass, researchers needed to find a way to tap into the 5G network.

Like its predecessors, the 5G networks service areas are divided into small geographical areas called cells. An antenna in each cell sends out radio waves that connect all the 5G wireless devices in that cell to the internet and to cellphones.

“People have attempted to do energy harvesting at high frequencies like 24 or 35 gigahertz before,” Eid said. But the antennas used only worked if they had line of sight to the base station.

Now, she and her colleagues developed a small, flexible Rotman-lens-based rectifying antenna (rectenna) system, capable, for the first time, of millimeter-wave harvesting in the 28-GHz band.

But to harvest enough power to supply low-power devices at long ranges requires antennas with large apertures. The problem with the larger antennas required to harvest 5G power is they have a narrowing field of view, which hinders operation from a 5G base station. In other words, the larger antennas cannot get a line of sight onto the 5G base stations, which exist in many more locations than those for 28G bands.

The Georgia Tech researchers created a system with a wide angle of coverage, which solves the problem of only being able to look from one direction, said Jimmy Hester, senior lab advisor.

“With this innovation, we can have a large antenna, which works at higher frequencies and can receive power from any direction. It's direction-agnostic, which makes it a lot more practical,” he said.

The key to seeing in many directions is the researchers’ optical lens as an intermediate component between the receiving antennas and the rectifiers.

Operating just like an optical lens, their Rotman lens can see six fields of view at the same time. The Rotman lens is key for beam-forming networks and is frequently used in radar surveillance systems to see targets in multiple directions without physically moving the antenna system, Tentzeris said.

More for You: How Industrial Countries Invest in Robotics

For their 5G device, they’ve devised a way to print the antennas and to tune the shape of the lens, which results in a structure with one angle of curvature on the beam-port side and another on the antenna side. This enables the antenna to map a set of selected radiation directions to an associated set of beam-ports; to “see” in six directions, he added.

Incorporating 3-D printing into their technology, the researchers printed the palm-sized wave harvesters on many types of everyday flexible and rigid substrates. Providing 3D and inkjet printing options will make the system more affordable and accessible to a broad range of users, platforms, frequencies, and applications, Hester said.

For instance, the harvester on a wearable device would ensure it has the energy to keep counting your steps.

“With this system, 5G stations can not only give us data, they can provide us with power,” she said.

Jean Thilmany is a freelance writer in Saint Paul, Minn. who about engineering issues.