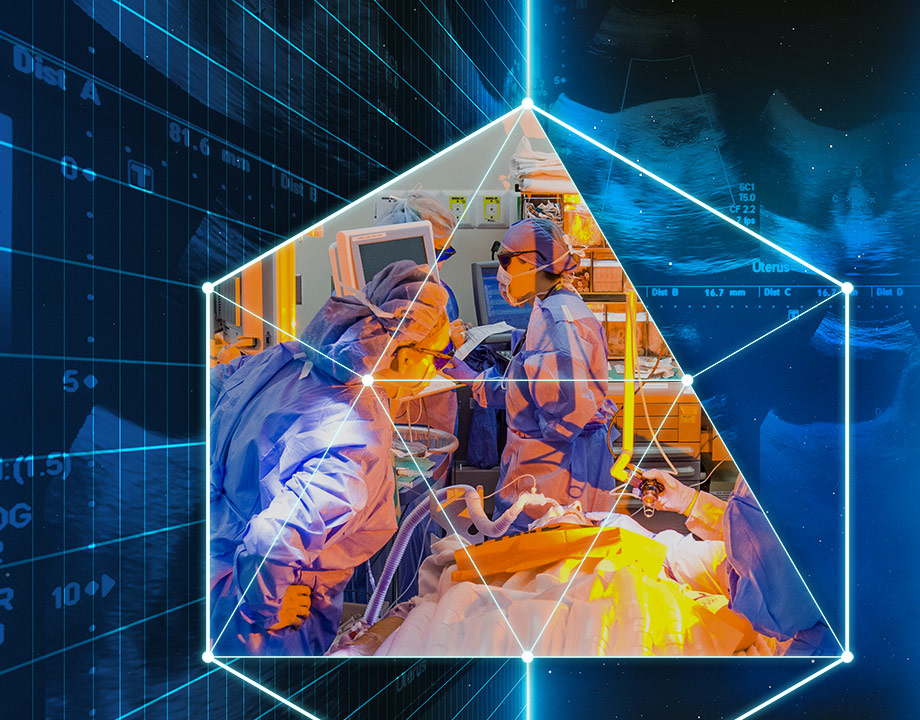 MIT engineers have developed a laser ultrasound that captures images from afar, offering a touch-free look inside the body.

The ultrasound transformed medical imaging. Safe, noninvasive, and offering immediate results, it is now one of the most ubiquitous tools for looking inside the body. But it does have its disadvantages. Perhaps the most problematic is it requires contact with the skin and the application of pressure. For burn victims, babies, and people suffering from pressure sensitive injuries or sensitive skin, the ultrasound is not a viable option.

But now mechanical engineers at MIT’s Institute of Medical Engineering and Science have created a new ultrasound method that requires no contact: it uses lasers instead.

The lasers aren’t used for the light they provide, but for the sound they create. When hit by a laser, skin warms up, expands, and then returns to its initial shape. This oscillation creates a high-frequency sound that penetrates the body.

“Light attenuates very rapidly in the body, but sound does not,” said Brian Anthony, a principal research scientist at the institute who lead the research. “So, we want the conversion from light to sound to happen as soon as it hits the body.”

After reflecting off bone and tissue, the tiny sound waves return to the surface where they are detected by another laser. 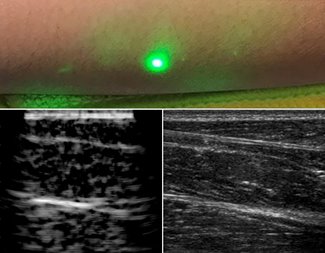 The new laser ultrasound technique was used to produce an image (left) of a human forearm (above), which was also imaged using conventional ultrasound (right). Image: courtesy of MIT researchers
Current ultrasound technology uses an array of individual piezoelectric crystals that both generate and detect sound. At the moment, the MIT team’s ultrasound uses only a single point of laser light that mechanically scans over the skin to create an image of what’s inside.

Those images are already comparable to conventional ultrasound. But this is only a proof of concept for now: Future versions will have multiple adjacent lasers working together to achieve clearer images.

“Conceptually, it’s simple: you just combine a bunch of lasers together,” Anthony said. “But if you want to go down the path of getting it miniaturized, and worrying about costs, then it’s not as easy.”

That potential miniaturization—made possible by advancements in sensors and lidar for self-driving cars—would allow this laser ultrasound to be used in places currently off limits to conventional ultrasound.

Patients who needs to monitor their thyroid, for instance, could do so regularly in the comfort of their own homes with a tiny neck strap. And, in the operating room, surgeons could have a quick look into any body part in the middle of a procedure.

“If you want to do real-time volume imaging, but you can’t port the person into a CT or MR system, you’ll be able to have something that is non-ionizing in the operating room that is fundamentally safe,” Anthony said. “I think there’s a unique opportunity there.”

Right now, the lasers’ wavelengths are both eye- and skin-safe. By requiring a patient to wear goggles, other wavelengths become available, which could increase the quality of the imaging in certain scenarios.

Laser ultrasound has the potential to do more than produce images of the inside without contact. “We can very much start to address the conventional knocks on ultrasound and make ultrasound imaging much more quantitative, which makes it much more diagnostically useful,” Anthony said. “Then you’re able to get not just pretty pictures out of it, but numbers that say something about the true geometry of tissue structure and changing structure dimensions over time—true material properties. That’s the promise.”

The pressure requirements of today’s ultrasound, for instance, prevent it from telling us anything about the elasticity of the tissue it’s imaging. By doing the work from afar, the laser ultrasound will tell us the properties of unperturbed tissue.

Though this is just the first step toward a commercially available laser ultrasound, the way forward is straightforward. “We know the issues,” Anthony said. “It’s just a matter of getting the funds and the equipment to systematically address them.”

Save the Date: Join ASME for a Virtual Congressional Briefing on May 10th